It’s pretty hard to find a carburetor in a new car anymore.  Outside the third world, it may be impossible.

Nevertheless, I know a lot of us are old enough to remember the drill.  For a cold start, pump the accelerator once, take your foot off, and turn the key.  Most of the time that’s all you need to do.  (If it’s a Ford with a 351 Windsor of some age, wait three seconds for it to quit.  Then, turn the key again.)  The only common mistake you could make was flooding it—too much fuel in the carburetor at once. Wait a few minutes and try again.  Or, press the accelerator all the way to the floor and crank for ten seconds at a time, waiting thirty in between, until it starts.

It’s extremely likely now that anything you drive day to day is equipped with electronically-controlled fuel injection.  Turn the key (or press the button).  Done.

Carburetors worked pretty well.  Fuel injection works essentially flawlessly, and brings benefits like increased efficiency, smoother delivery, and near-perfect reliability.  It is better in every way.  Consequently, you’ll never hear anyone say anything like “my new $35,000 Honda is pretty nice, but sheesh, I just wish it had a carburetor.”

Yet those of you still whining about the Windows 8 Start screen sound pretty much like that.

Be honest—have you even tried to use it?  Or have you rejected it out of hand because ewww gross it’s different? 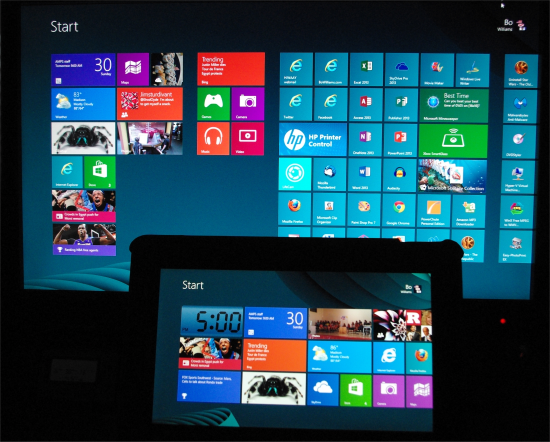 Yes, it is different.  It’s better.  I love it.  I love the organization options. I love the live tiles.  I love how easy it is to replicate my layout on multiple machines, optimizing this for desktop and that for tablet.  I love the standardization it brings to things like application settings.  It is classic bigger-better-faster-more.  There’s nothing I prefer about the old paradigm.

Take some time with it.  Think of it as an extended Start menu—what appears in Windows 8 when you click the Start button.  (That’s exactly what it is.  Think about it.)  Open your mind to this new experience.  Use it on its own terms—as it’s intended to be used.

You’ll love it in three days.

Some stuff hangs onto its relevance and/or utility in modern society by a half a hair’s width.  Here are my five nominees.

5. Condoms.  (I mean for birth control, not disease prevention.)  Yeah, all right.  Did my time with them.  Paid my dues.  For a couple of years now there’s been a 99.995% chance I’m sterile just sitting here, so I’m very highly unlikely to have to deal with them again.  To those still doing so:  my advice is to tear open the damned thing as soon as you’re reasonably sure you going to need it.  Establish its orientation, because if you start unrolling it the wrong way, you’re going to need another one.  At that point—fumbling for the box, fishing for another one—if you’re 19 years old:  no problem.  If you’re 40:  TIMBER!!!

4. Gary Danielson.  He’s an agitator and a drama queen.  Plus, he’s got an obnoxious Yankee accent that I find marginal when Alabama’s winning, and infuriating when they’re losing.  He’s a net positive because he is a tremendously cerebral quarterback, and brings that to his analysis.  He consistently makes me more knowledgeable about the game.  If you haven’t noticed that about him, open your eyes.  He’s annoying, but he’s very smart.

3. American Civil Liberties Union.  What an obnoxious bunch of jackasses.  But you know what?  They’re antipathic toward too-powerful government, and though I’ve hardly been overwhelmed with their responsiveness during Obama’s presidency, they’ve got a pretty good record for sticking it to The Man when he needs it stuck to him.  Net positive.

2. Wendy’s.  There are very few high-quality food items being passed through drive-through windows, but if I have to take a fast-food burger, it’s probably going to be Wendy’s.  It has mostly to do with the average age of the sandwich when I receive it, I think.  I almost always believe my Wendy’s burger was made in the last ten or fifteen minutes at the most.

1. NyQuil.  You poor, poor bastard.  If you’re seriously considering riding the green licorice lightning, then you don’t feel very good at all, do you?  I hate NyQuil for the head full of sand it gives me until about 4 pm the next day.  I love it for the sleep it reliably delivers, even if it’s only worth about 75% of real sleep.

Well, not strictly speaking, but it’s the last one on my personal profile that dates from 2008.  I just “marked it for deletion,” meaning that if I don’t log back into it in the next fourteen days, Facebook will delete it (not deactivate it) from their servers.

Will they really do that?  Who the hell knows anymore?  But I hope so.

I am (mostly) leaving Facebook because of privacy concerns, which I described in this post.  Below is what I had to say on the way out.  This is my last Wall post, with no changes other than the name redaction and the added hyperlinks:

Inside an hour to go. This will be my last update on this profile. (Wow, sounds like I’m leaving radio range or about to run out of oxygen or something, doesn’t it?)

(Name redacted) has now put all kinds of pressure on me to say something cool on the way out. I wasn’t expecting that, though he’d be a likely source from which it would emanate.

I’ll just say again, this is not easy. Don’t ever make fun of anyone who does this and then shows back up three days later. It’s amazing what Facebook does for us, but it’s also terrifying to realize how deeply its tendrils invade; how dependent we become on it. I’ve had a this-is-my-last-day-to-smoke feeling off and on all day. I’m confident I’ve thought this through and I’m going to stay with my new paradigm, but I think no less of anyone who does this and then decides naaaahhh…

I’m kind of stealing second while keeping my foot on first, creating my other profile and getting to keep the BoWilliams.com Facebook page and stay in my groups and all that. The difference is, that profile will not have any friends. He’ll never take any photographs. He never went to school. He never worked. He’ll never have any significant demographic value to the Facebook dossier orgasmatron. He’s a means to an end.

It is cool, touching, and humbling to have so many of you share with me what our interaction here has meant to you. Folks, I’ve enjoyed it too—deeply. Facebook is one of those things that is as much or as little as you make it, and you and I have had meaningful exchanges here. That means you’ve given of yourself. I’m so thankful for that. I’m hoping we can keep a lot of the vibe going on the BoWilliams.com Facebook page.

OK, that’s a lot of bloviation, and I’m going to start tearing up if I go much more, and then I’ll have some horribly over-heartfelt call for us to discuss our feelings and what the true meaning of empathy is and a whole bunch of other crap, and before you know it we’ll be running around in the woods in loincloths eating tree bark, and nobody wants that. So I’ll stop there.

This is it. I’m going through a few more messages, and then this profile will wink out of existence.

Come see me on the other side. Thank you and God bless.

You ever feel like that?  Wow, is everything nuts right now.

The biggest, and saddest, news is that we’re almost certainly going to have to say goodbye to Oliver next week.  He is severely anemic, and we’ve systematically eliminated potentially treatable causes over the past couple of weeks.  Our last try is doubling his prednisone dose to see if we’ve not been giving him enough to get on top of an autoimmune disorder.  If that works, he’ll improve over the next several days.  (Dr. Patton is pretty much calling it a long shot, though.)

We have an appointment next Tuesday morning.  If a miracle happens and Oliver gets better, then Lea’s taking him in to get more blood drawn to check his RBC count.  If he doesn’t improve, then I’m taking him in to go to heaven.  I’ll have a good post up for him that day.

He’s an awesome cat—the first one I’ve ever loved.  I’m not doing well with it—no one is—but we were blessed to be able to rescue him and give him, and have him give us, six good years.  More later.  Thank you for your thoughts and prayers.  We really appreciate them.

In other news, in light of this revelation about Facebook and its shadow profiling, I’m about to delete my personal Facebook profile.  It is much easier and more fun to stay on than to get off, but I finally had a “that’s enough” moment reading that article and the ones preceding it.  I don’t know how close the water is to boiling, but this frog is jumping out.

Now make sure you understand what’s going on.  Say you and your friend Sally are both on Facebook.  Sally uploads some contact information that contains a telephone number for you that you had not previously provided to Facebook.  Facebook notes that, and puts it on your “shadow profile.”

Now whether or not a tortured reading of their Terms of Service indicates you “consented” to that, it’s sleazy as hell.

The article further makes clear that Facebook will still work very hard to know as much about me (and other non-FB members) as possible, but I don’t have to help them.

“What about all of that stuff you already shared?  Do you really believe they’ll delete it?”  I don’t know.  But even if they don’t, if I stop sharing today, then the fidelity of the information that I have shared gradually degrades, does it not?

(Oh, I got over my affection for Foursquare really quickly, too.)

Finally, it’s an uncharacteristically busy social week for me.  Lunch with two cool fellow Rocket City Bloggers tomorrow.  Seeing some fun high school friends tomorrow night.  On Thursday is the Rocket City Bloggers meet and greet, to which I’m really looking forward.  You can RSVP as late as 4:00 Wednesday, June 26, so if it sounds like something you’d enjoy, come see us.  And on Friday, I’m having lunch with an old high school friend I haven’t seen in more than 26 years.

Oh, and you want to wave at Saturn?  Check it out.  (Probably should have saved that for Thursday miscellanea #242, but oh well.)

Pleased with the turnout for our #HumanTrafficking speakers' event. Pat is giving an intro ahead of our keynote speaker, Linda Smith of @SharedHope. #enditnow pic.twitter.com/5BxO…