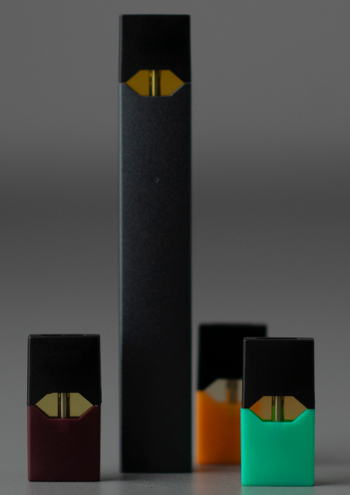 A Limestone County family has filed suit against e-cigarette manufacturer JUUL (and 35% owner Altria, parent of Philip Morris) and a local merchant, wishing to hold them responsible for their 17-year-old son’s nicotine addiction. The WAFF story, which embeds the legal complaint, is here.

I started smoking cigarettes regularly in March 1987, just short of my 16th birthday. I was able to smoke for a long time without my parents or stepparents detecting it, mostly because all four of them smoked. Also, it was only very rarely that I got carded, and if I did, all I had to do was go down the street. Finally, there was no significant financial hurdle. In the beginning, I would get a pack of cigarettes and a sixteen-ounce soft drink and get a little change back from $2.

These were circumstances highly conducive to me getting addicted, and I did. Except for a sustained period of a year and a half that ended the week my mother died in April 2001, I smoked a pack to a pack and a half a day from the spring of 1987 until the summer of 2011. I was 40 years old when I finally quit, having smoked a quarter of a million cigarettes.

It is the greatest mistake of my life, and quitting was the hardest thing I’ve ever done that was completely under my control. I still thank God regularly for delivering me, and ask for His help in continuing to keep me abstinent. (As I’ve said before, we like to think the addiction is across the country, or at least in the next town. It’s not. It hangs out about six blocks away.)

It is a demon. I feel tremendous sympathy for this young man’s parents. Quoting from the complaint:

“A.B. now struggles to function without nicotine. He experiences strong mood swings and bouts of rage from withdrawal from the JUUL. A.B’s severe addiction to the nicotine levels contained in the JUUL created within him behavioral issues and deceptive habits that did not exist before, causing severe conflict in the Bentley home to the point where he had to be sent to a military academy in Texas. There, his parents would mail him nicotine cessation products in an effort to help him quit. This behavior of anger and deception has caused A.B. a great deal of guilt, but he was so desperate to obtain nicotine that he could not restrain himself…A.B. still struggles with this nicotine addiction and will continue to struggle with this addiction for the rest of his life. A.B.’s nicotine addiction from JUUL permanently injured and altered his developing brain.”

To be sure, there are different circumstances here from the ones under which I got hooked. Legally, financially, and culturally, it has (thankfully) gotten steadily more difficult for young people to become addicted to nicotine.

However, as painful as it is for his parents to witness, there is nothing remarkable about their son’s behavior described above. A.B. is exhibiting textbook nicotine withdrawal symptoms. Suing tobacco companies and convenience stores will not help him recover. Moreover, there is already a high state of alert about these products. It’s highly unlikely that this lawsuit raises any flags that aren’t already flying.

From what the complaint reveals, and from what I know firsthand about being a nicotine-addicted teenager, I strongly suspect his parents are requiring abstinence as a condition of A.B. living in their home. That is not realistic. They may also think he can patch up or chew gum and just quit. That is not realistic either.

Is the “severe conflict” at home coming from his addiction? Or his parents’ reaction to it?

A.B. should be home (if he’s not home already). Everyone should take a deep breath, speak softly and calmly, and work on a plan together that may not include him quitting right this second. He must want to quit himself for any aids to be effective. But there’s no need to put his entire life on hold because of this unpleasant thing that must be managed for a time.

(And it doesn’t help him to pay a lawyer another dime.)

“We are definitely going to Good Company Cafe for date night.”

That was the first thing I said to Lea when I got home from an extended and thoroughly pleasant visit with Alicia, Kristen, Jessica, Katelyn, and Gary as part of the food blogger tour ahead of Huntsville Restaurant Week. 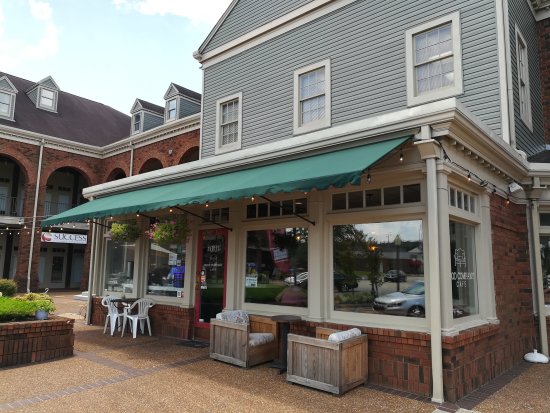 Good Company Cafe is off the Parkway, just south of Martin Rd. Owners Angela Ozbolt and Molly Jones met in culinary school in Rhode Island. They bring a chef-driven approach to their menu, which means that continuous innovation, changing seasons, and so forth guarantee a certain dynamism.

I’m getting to the particulars, but I’ll just say this up front: everything I put in my mouth popped. Our fare was incredibly flavorful and fresh, and you know why I call it a great date place? There’s a great deal of beauty and impact here for not a lot of money.

(Probably a sidebar too far, but honestly, I got a little bit of the same world-class vibe here, today, that I got the first time I visited Barber Motorsports Park in Leeds:  “I’m so proud this is in Alabama!”)

The Good Company Cafe specials for Huntsville Restaurant Week are good for-one and for-two combinations of menu offerings, so there’s a great deal of variety in what you might select. Given the nature of our visit, we said “chef’s discretion.”

(That meant a wonderful culinary and gustatory adventure with Angela and Molly.) 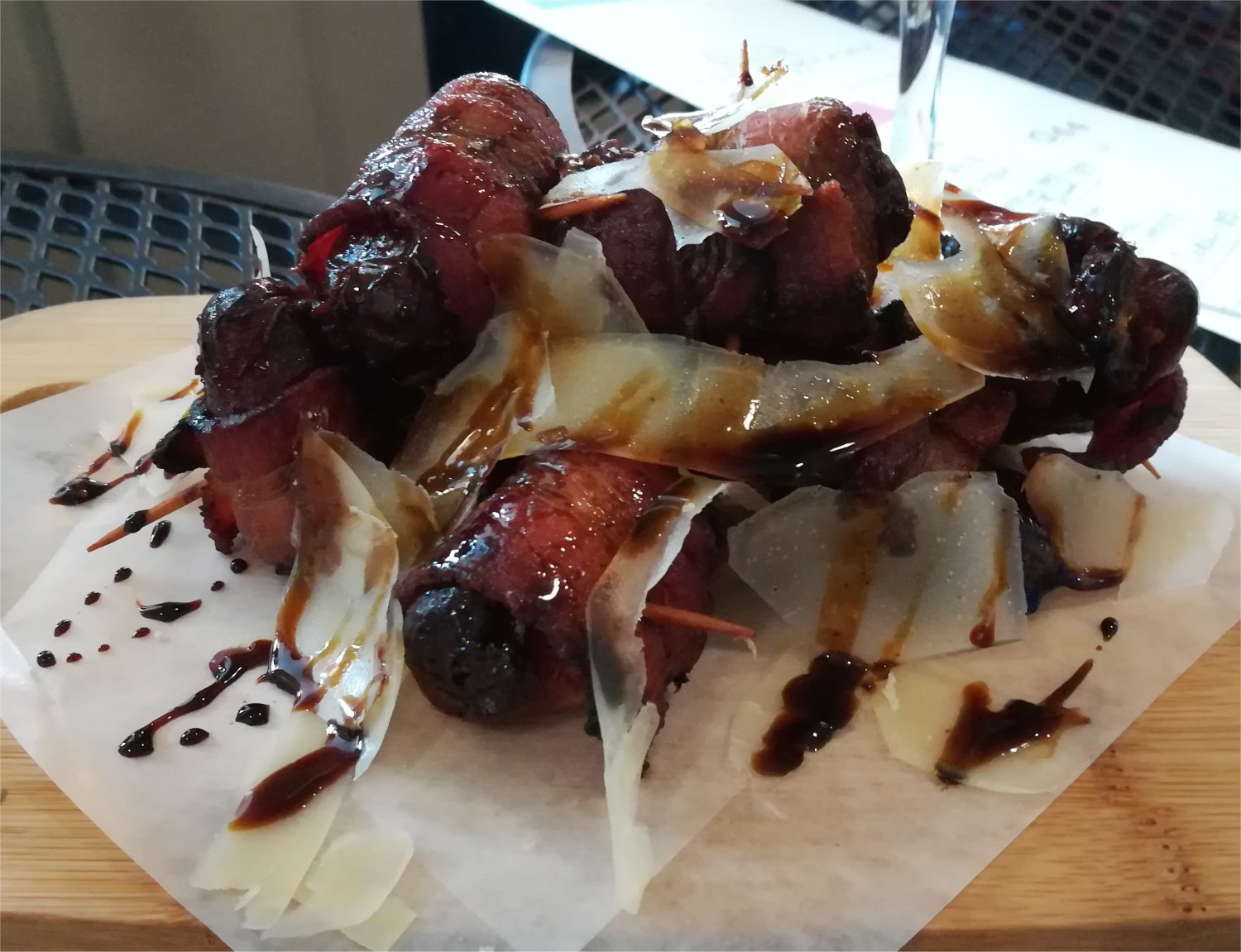 Bacon-wrapped dates with shaved Parmesan. This was a truly amazing appetizer, and my single favorite item of the trip. I had no close analog for this taste in my bank of experiences, and was delighted to broaden my horizons. (Click for larger.) 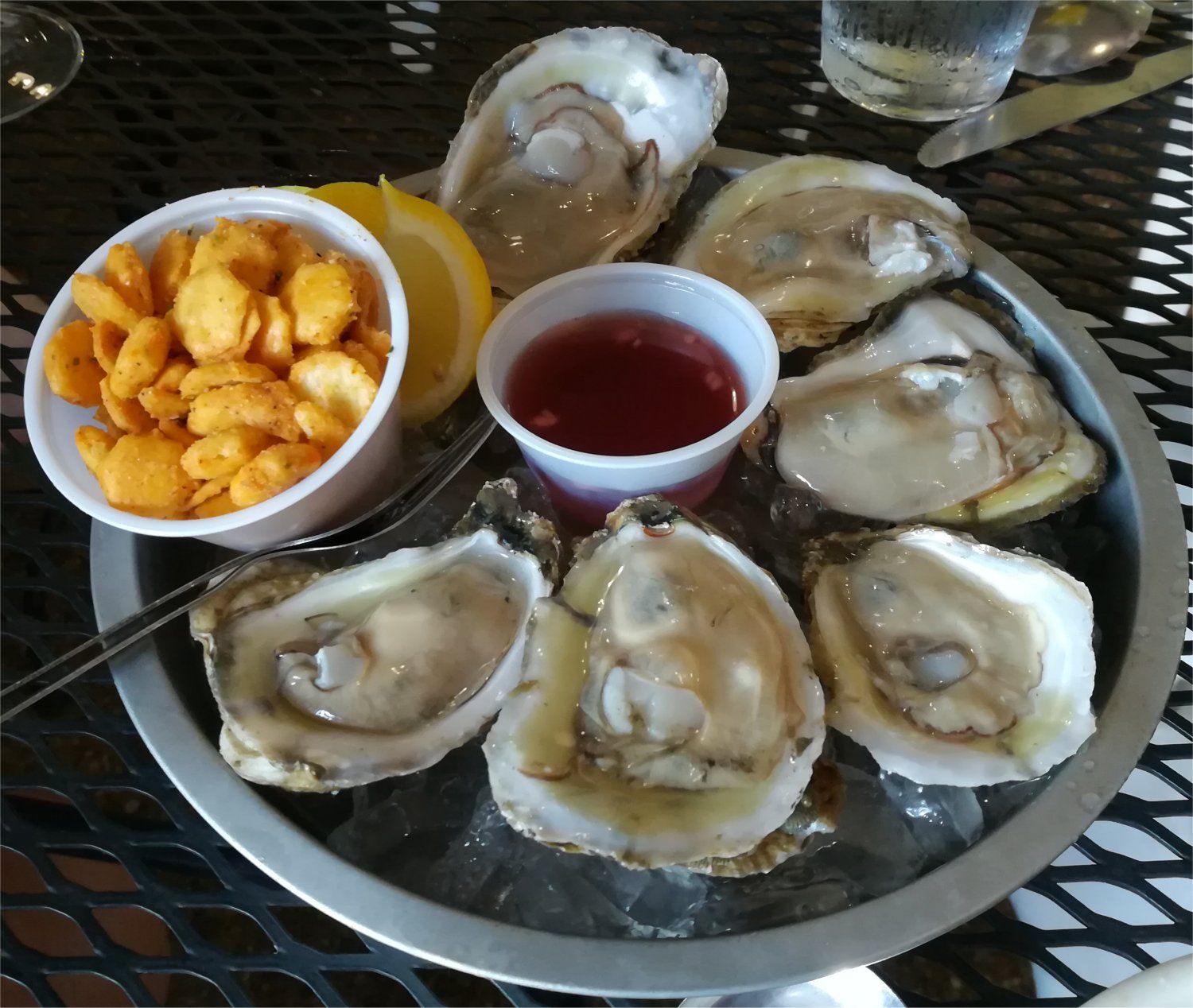 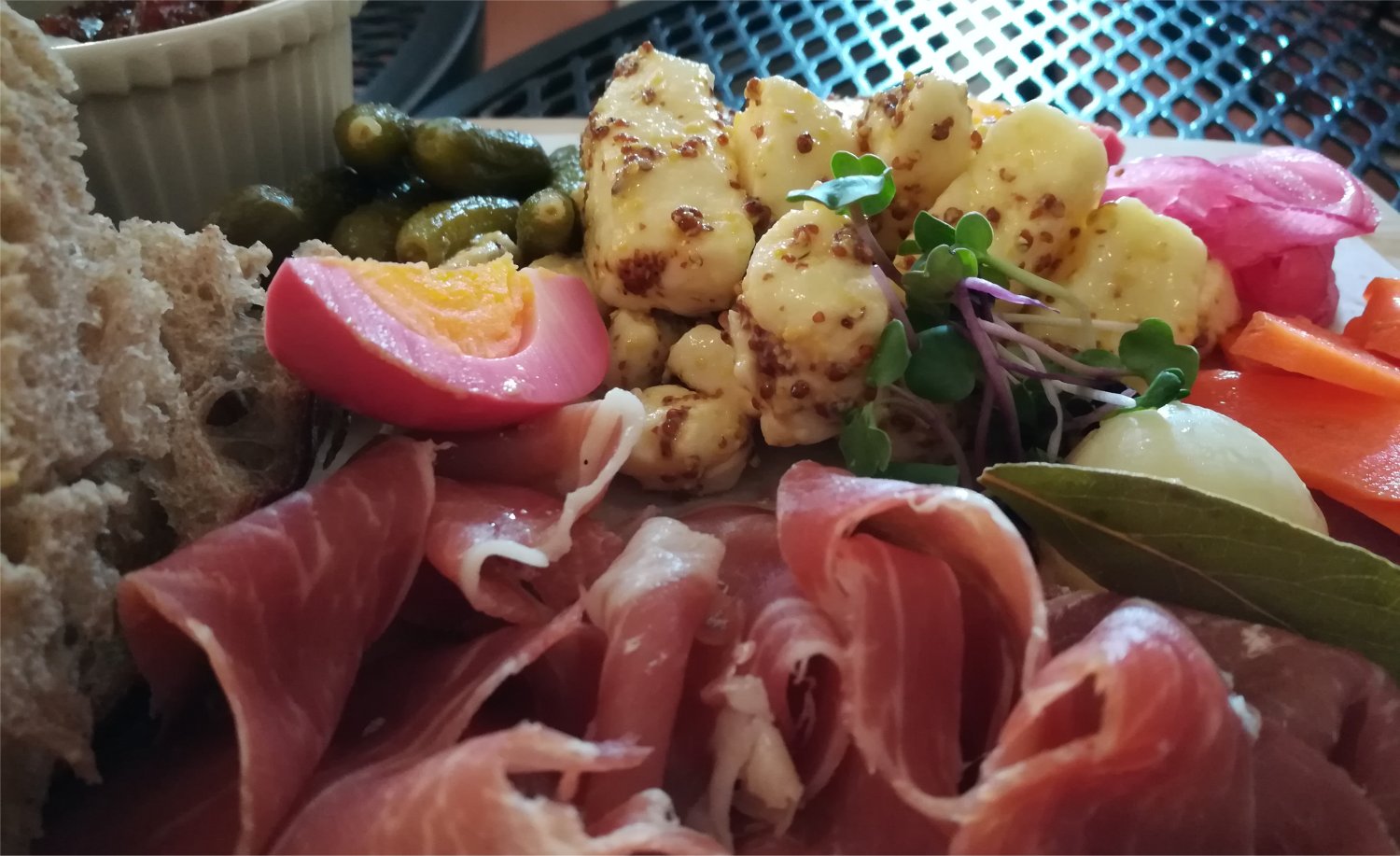 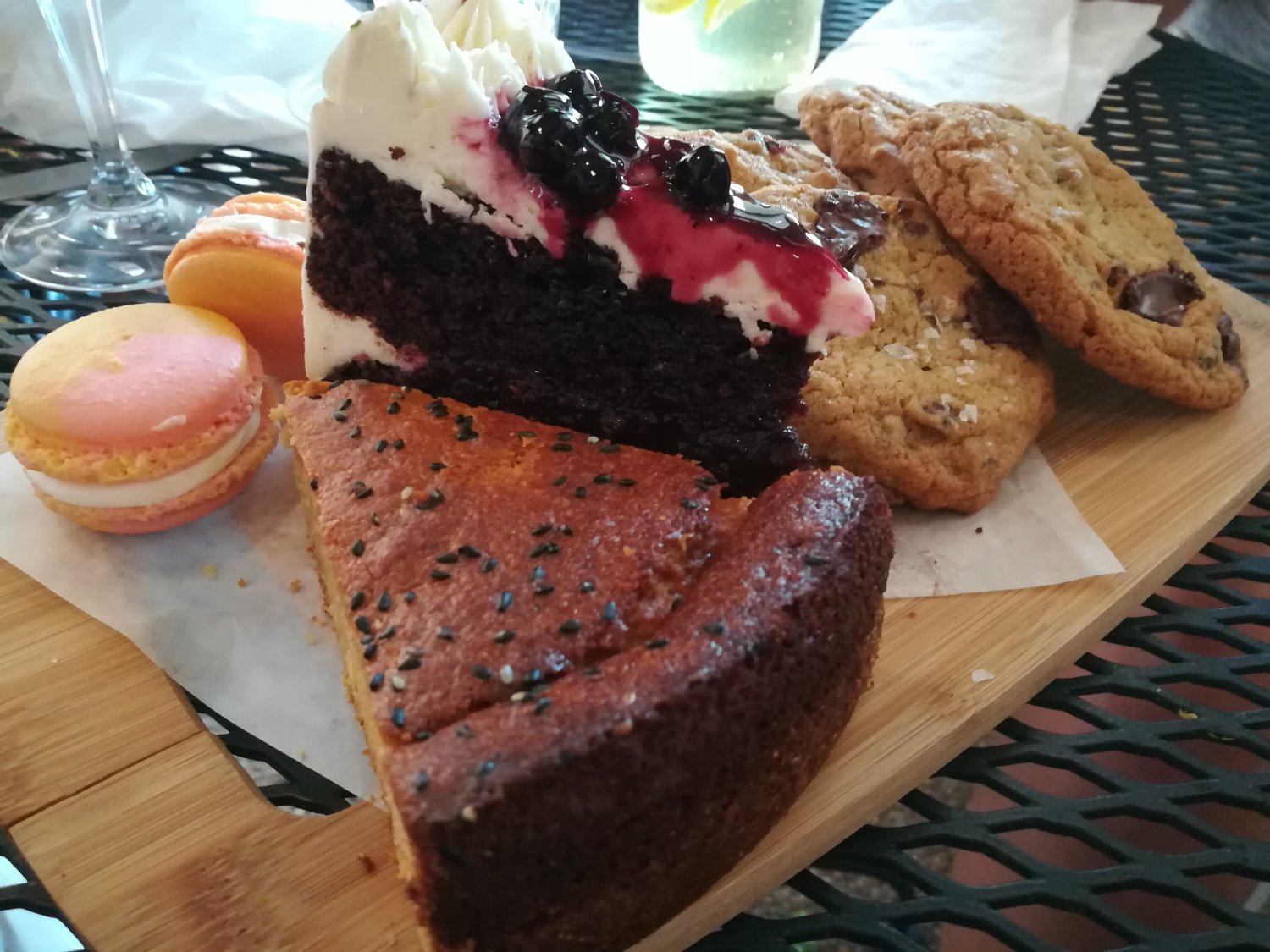 The dessert board, with from-scratch macaroons, mildly sweet corn cake, chocolate raspberry cake, and some of the best chocolate chip cookies I’ve ever had. (Click for a closer look.)

Good Company Cafe deserves your serious consideration. I can’t wait to go back for lunch during the week, and I really can’t wait to take Lea there.

One of my favorite local events is fast approaching! Huntsville Restaurant Week is only a couple of weeks away, and again, I’m honored to have been invited to participate in the food blogger tour ahead of the event. So watch for some tantalizing previews in the next several days.

Pam and her colleagues at the Huntsville/Madison County Convention & Visitors Bureau really do a great job with Huntsville Restaurant Week. The event grows every year, and really shows off what a foodie city we’ve become. We have so many choices now! From numerous international cuisines to innovative takes on American favorites, there are so many good things to put in your belly in this town.

See you out there. Say hi if you see me!

This is part of an ongoing series reviewing hot wings in the Huntsville area. Visit #HsvHotWings for a comprehensive linked list. 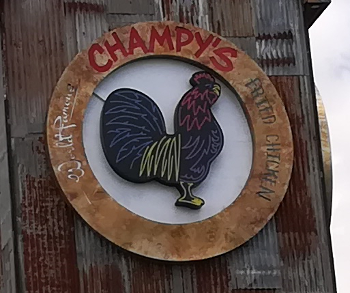 Champy’s Chicken is a small chain whose newest location is in southern Madison, near Shelton & Madison Boulevard in a location that used to be Bison’s and Buffaloes. It is a full-service restaurant, and the tin-walled road house motif from this location’s previous instantiations survives.

The Champy’s wings are available fried or smoked, with sweet heat (medium), sweet heat (hot), and buffalo as the sauce choices. I went with fried wings in sweet heat (hot) sauce, after being told it was hotter than buffalo. My eight-piece order, with ranch and two pieces of celery, was $9.89. Mikayla was an excellent server. 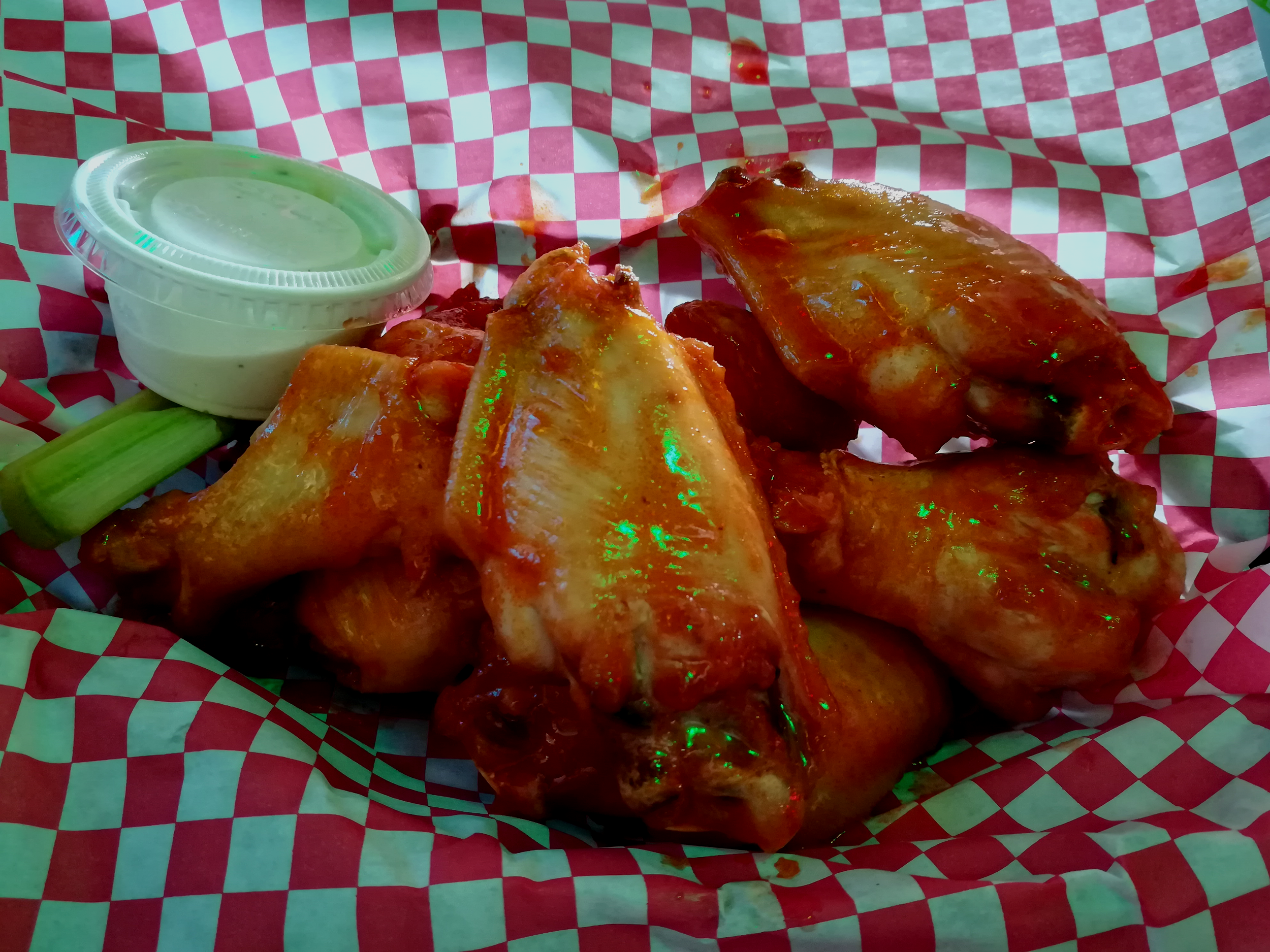 Quality: 3/10. Upon arriving at the table my four flats and four drums had decent curb appeal, but were quickly torpedoed by excessive fattiness. Also, they were rubbery and difficult to get off the bone, strongly suggesting they were overcooked. (No charring evident, so I think “too long” as opposed to “too hot.” They probably needed to be cooked hotter and shorter.)

Flavor: 3/10. The sauce was sweet, but very thin, and there wasn’t much of it. Sadly, these were some of the blandest hot wings I’ve ever had. I can’t recall ever salting and peppering hot wings in a restaurant before. I did these.

Heat: 2/10. Nearly nothing going on here. A slight whisper of heat persisted for a few minutes, but that was it (and I’m not sure how much of that came from the black pepper I added, actually). Regular Tabasco sauce has hit me harder.

This was one of the more unfortunate #hsvhotwings adventures I’ve had. Based on my experience, you can get better wings just about anywhere. Perhaps I’ll pay Champy’s a validation visit sometime.

The boys and I stayed up last night to see the 2020 Corvette reveal—the first C8. I had hoped to be able to easily find a good version of the reveal video and drive-out itself, but this released-this-morning commercial gives you a good look.

Can’t wait to see it in the ‘glass!

About 3 hours ago from Bo Williams's Twitter via BoWilliams.com