Roseanne Barr was once “only” a stand-up comic—and she was a good one.

Alas, it seems being a good stand-up comic is a major risk factor for being, if you’ll pardon the insensitive expression, out of your damned mind. Sometimes it seems relatively innocuous. Frequently, it’s destructive. Roseanne is definitely in the latter category.

Recently you may have heard that she tweeted offensively, and ABC promptly canceled the revival of her popular sitcom. “Roseanne’s Twitter statement is abhorrent, repugnant and inconsistent with our values, and we have decided to cancel her show,” ABC Entertainment president Channing Dungey said.

This has brought out the worst in people, from all parts of the political spectrum and on all sorts of issues, real and imagined. However, as David French points out, the first mistake was ABC’s, in reviving the show at all. It has been established for quite some time now that Roseanne is a lunatic, trafficking in 9/11 conspiracy theories, ranting about the Jews running the world, and what-not. Presumably ABC had its eyes open when they brought her show back, and decided it would be lucrative enough to be worth the risk. How’d that work out?

As far as Roseanne the show goes, I was never a big fan, and I never saw the revival. So this development causes me no heartache, other than the swelling disgust I feel at absolutely everything being turned into a political cudgel.

I think I’m turning into one of the reasonable ones.

I like to eat. It’s not hard to figure that out looking at me. I also like to write. I’ve had BoWilliams.com for just about exactly a quarter of my life.

So, restaurant reviews are a slam-dunk. Once in a while, I review them here. I review them regularly at Rocket City Mom, where I’ve done more than 40. RCM just put up my top 5 choices in the area. If you want a good place to eat, start there. 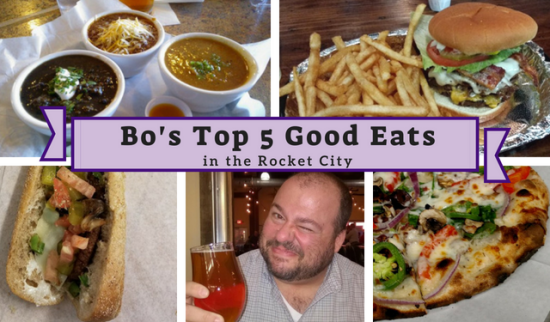 There is method to the madness—more than may be apparent from casual examination. For example, Rocket City Mom does not run negative reviews. If there is a minor ding during an otherwise positive experience then it will still run, but an overall subpar experience won’t show up at all. So, potentially, outings that begin as Rocket City Mom reviews may end as BoWilliams.com reviews. (Whether that has ever happened is left as an exercise for the reader.)

You can get all of my restaurant reviews—indeed, all of my reviews period—on this page. You’ll want to bookmark it. On such matters, you should trust a fat guy who can write.

“Every single year that we’re on Earth, you have huge tons of silt deposited by the Mississippi River, by the Amazon River, by the Nile, by every major river system — and for that matter, creek, all the way down to the smallest systems. And every time you have that soil or rock whatever it is that is deposited into the seas, that forces the sea levels to rise. Because now you’ve got less space in those oceans because the bottom is moving up…All of that displaces the water which forces it to rise, does it not?” – U.S. Representative Mo Brooks, R-Alabama, May 16, 2018

There are many discussions to have about climate change, and there are many specific points on which reasonable and intelligent people can disagree. However, that ocean levels are rising is not a controversial assertion. Moreover, though there may be more than one way to consider what constitutes an alarming rate of sea level rise, as well as how we might best react, the causes are well understood.

“Soil or rock whatever it is” causing “less space in those oceans” is not one of them. To suggest that we could detect such an effect at all, much less that it would be a primary contributor to the current sea level rise, is to demonstrate significant ignorance of, most prominently, the sheer vastness of the ocean. (When did I take physical science? Eighth grade?)

Now I don’t expect my elected officials to know everything. In fact, strictly speaking, my ideal elected official doesn’t even have to be particularly smart. However, Brooks was asking a question at a House Science, Space and Technology Committee hearing, not chatting at the Waffle House. A responsible professional would be better prepared.

But even that is not his greatest error.

The worst thing Mo Brooks has done here is to insufficiently consider the Alabama factor. There is a widespread predisposition to cover Alabama in an unfavorable light anyway. It is singularly unhelpful for our congressman to be spitballin’ ’bout the crick washin’ rocks into the ocean and shoot, that right there is prob’ly why it’s risin’. Departing from what you know (and despite this attempt to mitigate the damage, that appeared to be exactly what he did at the hearing) on a large stage is perilous indeed, and absolutely no charity may be assumed.

Brooks had a mulligan of this nature already. That he still doesn’t know any better does not tell the story of a savvy politician.