Lea got me a nifty solar watch charger for Christmas. It works much more quickly and reliably than the bathroom window sill. So I’ve been having fun getting some old soldiers out and enjoying them again.

I charged this one last night. I bought this watch about 12 years ago. It had a brown crocodile strap on it when I bought it that I didn’t think suited it. I like this blue strap with white stitching for it. 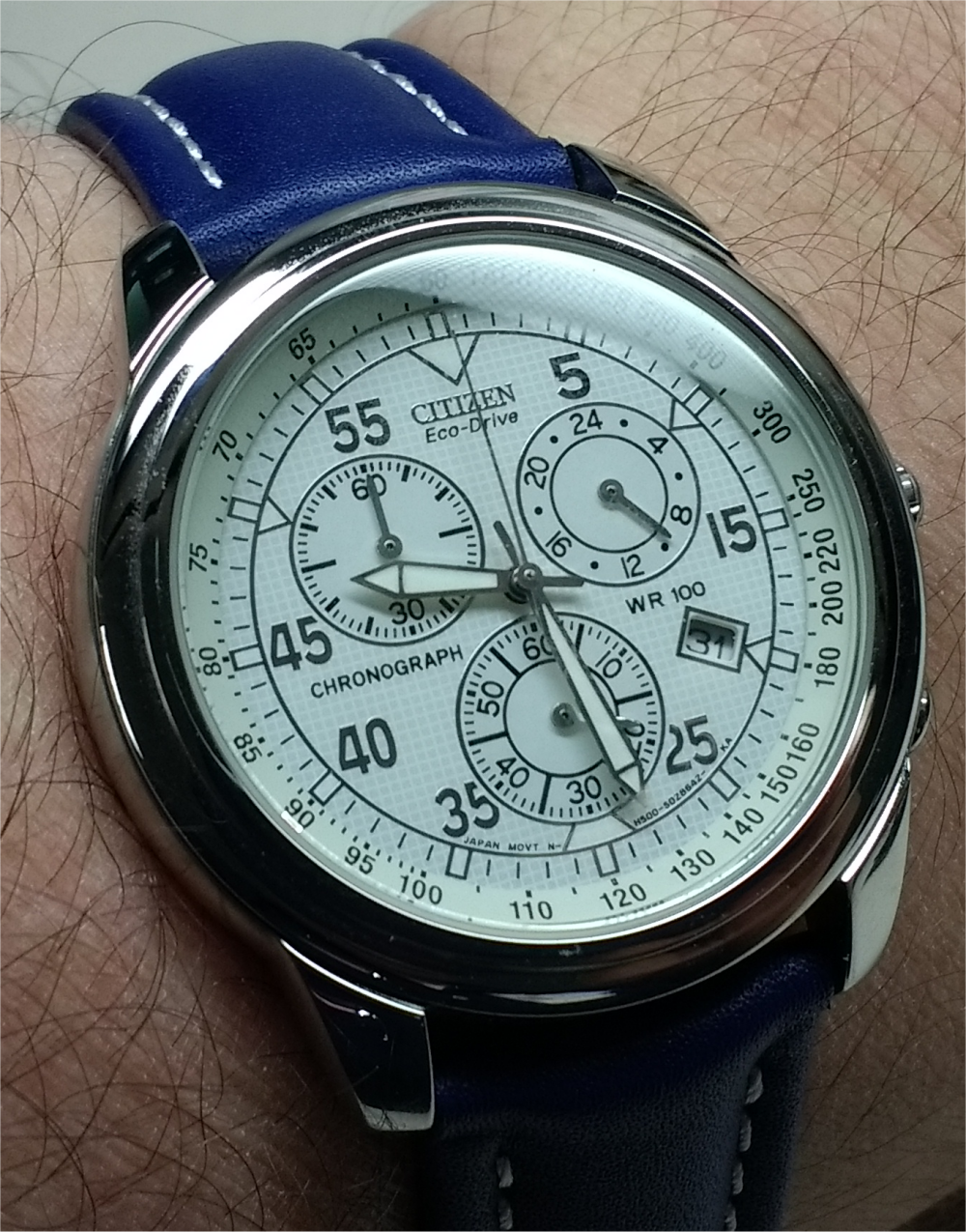 I have an interesting problem, though. I now need my reading glasses to see most of the detail on this dial. (Or, no corrective lenses and hold it closely.) I certainly need them to set it.

Now when I have them on, I can see that I still like all of the little touches. And I can read the time fine without reading glasses. The date takes me a second, but only a second.

If people like my watch and compliment me them that’s fine and I say thank you, but I wear them for me. So the question becomes: is it as satisfying to wear this watch now that I can’t just look down and see a lot of what I like about it? I don’t think it is.

I’ll probably not ever be a strong prospect for a smart watch. The reason is that I love watches.

Huh? That may seem counterintuitive at a glance. But dig: I don’t want to wear a smart watch the way one is intended to be worn. A smart watch’s maker generally wants you to suck it into your life and make it integral to your routine, which I find undesirable, because I like wearing different watches day to day. See?

My general routine is that I wear the same watch Monday through Thursday during the day. Then, Friday, Saturday, and Sunday I mix it up (though lately I’ve been wearing the watch on Sunday that I intend to wear during the day the following week). 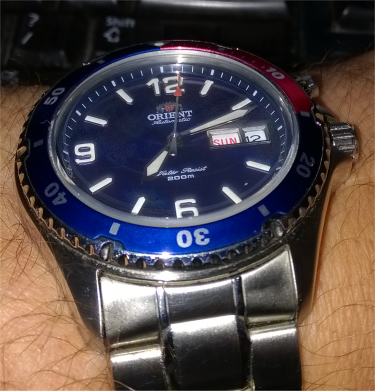 My evening watch, if I’m going out, is usually whatever I wore during the day, though sometimes I may change it depending on attire. (For example, if I wear a polo shirt with embroidery on the left breast, I like the color of my watch dial to match the color of the logo.)

If I’m staying home, I have a kick-around I’m usually pretty faithful to for several weeks at a time. Right now I’m wearing an Orient Mako diver in the evenings. I put it on when I get to my house as reliably as Mr. Rogers put on a cardigan when he got to his.

I do have several gadgety watches. I have a couple of Citizen pilot’s watches, and several nerdy Casios. But those aren’t watches that want to be your buddy every second of your life. They’re for specific purposes.

Smart watches want to be your buddy every second of your life. And right now, the 800-pound smart watch in the room is the Apple Watch.

I’ve touched on Apple’s hostile business model before. There was the pentalobe screw fiasco.

There’s what they do with accessories. There’s a bit of razor-and-blades model for a lot of technological ecosystems, but Apple is particularly offensive. After you get your (often subsidized) phone or other device, there are a few more ancillaries you want or need. Manufacturing costs tend to be low for these things. Maybe a cable costs $5 to make and transport to point-of-sale. Most companies put that out there at $19.95 or $24.95. Apple puts it out there at $49, and also tries its darnedest to make it impossible to knock off.

It’s a company that manages to look arrogant in an inherently arrogant space. Nice stuff, mostly, but there’s a very real rob-you-and-make-you-like-it aspect to its customer relations.

In my view, this aspect has reached new lows with the Apple Watch. Now never mind that the thing starts at $349. That’s galling enough, but to get one that will look good in the boardroom, they can get into you much more severely than that. 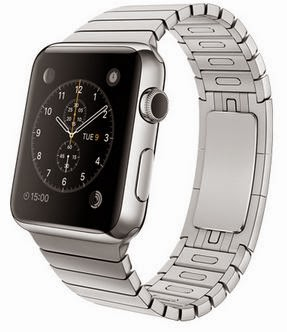 I happened upon a link to one of the steel bracelets available for the Apple Watch. It is $449.

Only the bracelet is $449. Watch not included.

I’ve purchased a lot of stainless steel watch bracelets in my life, of varying prices and quality levels. The nicest steel bracelets have solid links (as opposed to folded), excellent fit and finish, high-quality clasp, and so forth. They look, well, a lot like that Apple Watch bracelet.

Now, part of me says more power to Apple. I’m a big believer in capitalism, and something is worth what someone will pay. But I just wanted to get it here to be Googleable that that Apple bracelet may well be priced at ten times what it costs to manufacture and deliver for sale.

The golden opportunity here is for someone to develop and market high-quality adapters for the Apple Watch that would enable it to accept mass-market bracelets and straps. These adapters would attach to the Apple Watch’s non-standard lugs, and open up many more choices at much lower prices. You know, even that ought to get Apple excited on some level. After all, then they could arrogantly refuse to service any Apple Watch that came in with anything but an Apple strap or bracelet on it.

Apple continues to do a great job of making me stay away from their products.

The Melting Pot has been open at Bridge Street for three years now, and Lea and I just found our way there for the first time Wednesday night.  It is a fondue restaurant, which means that whenever anyone mentions it, I make ’70s jokes.  (“Did you guys check out the new 8-tracks at TG&Y after […]

My sons are seven and almost ten, and they each have and wear a wristwatch.  Aaron just got his; Nathan’s had one since he was Aaron’s current age. This is rather unusual for their generation.  As I’ve said before, the wristwatch is well on its way to full-blown affectation, as opposed to necessary device.  No […]

The southeastern United States is enjoying a marvelously mild day.  A splash of meteorological joy appearing amongst sustained seasonal malaise is historically bad for my blog, and today is no exception.  Traffic is down 30-35%.  In fact, I’m positively delighted you’re reading this.  No one else is. Winter Saturdays mean Upward for us, so we […]