We prayed the Wesley Covenant Prayer this morning at our last service of 2017.

I have a hard time with it in some ways because it’s difficult. It’s easy to think of how I know I will fail its pledges multiple times in the coming year. I have to remind myself that I am expected to fail, but that I am also expected to aspire.

I am no longer my own, but thine.

Put me to what thou wilt, rank me with whom thou wilt.

Put me to doing, put me to suffering.

Let me be employed for thee or laid aside for thee, exalted for thee, or brought low for thee.

Let me be full, let me be empty.

I freely and heartily yield all things to thy pleasure and disposal.

thou art mine, and I am thine.

And the covenant which I have made on earth, let it be ratified in heaven.

I haven’t had a favorite soft drink in quite a long time. But today, after a lengthy courtship, I think it’s fair to say I’ve committed to Diet Rite.

Originally made and distributed by Royal Crown Cola and today owned by Dr Pepper, the current Diet Rite cola is free of caffeine, sugar, sodium, and aspartame. I think it tastes closer to regular, sugar-sweetened cola than any other diet cola I’ve ever tried. It is tasty enough to use without apology in an ice cream float, or as a mixer. I drink quite a bit of it.

So of course it’s apparently at death’s door. Quoting the Wikipedia page above:

The Snapple website contains a Product Locator link for Diet Rite; however, the page it links to does not include Diet Rite as one of the available brands.

Diet Rite is no longer listed as one of the brands on the RC Cola website.

Oh, dear. Indeed, both this site and this one are pretty clinical, with a little bit of information and no marketing to speak of.

If you’re currently drinking a caffeine-free diet cola with any regularity, please give Diet Rite a try. It’s an excellent product, and one I’d like to have around for quite some time to come. 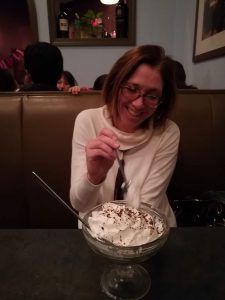 I had dinner with my childhood friend Margaret tonight. I sneaked a photograph or two of her sizing her mousse up. When I posted one of them on Facebook, she responded warmly, and one of the hashtags she used was #camelotdays.

Margaret is my childhood pediatrician’s daughter, but that’s incidental. She and I are personally connected mostly from Grace Episcopal Church. Both of our families belonged to the church. Also, she and I both attended the Episcopal Day School there, which was the de facto elementary campus of The Donoho School. Each of us remembers those years as the happiest times of our childhoods.

Now there are a couple of things going on there. First, and more obviously, we were two bright children who were well cared for. We had no worries about basic needs, and as eight- and nine-year-olds aren’t generally saddled with a lot of responsibility, we rightly remember it as a carefree time.

The second is that, in each of our cases, there were later circumstances beyond our control that set us on paths that we now recall as less than ideal.

I get it. But stay with me. (And I’m speaking for myself below, not for my friend. Margaret planted this for me to consider during the drive back. We didn’t have this conversation.)

It’s easy to feel resentful, but there isn’t much point in the feeling itself. I know there are people who spend their lives mad at their parents for something (or more than one something) in their childhoods. OK, fine. Even if you bring no charitable bent to the sentiment whatsoever, you’re up against the hard fact that the past is immutable. What does raging against it accomplish?

And if you’re at all inclined to issue a little benefit of the doubt:  is it more likely or less likely that your parents were doing the best they could?

I think the value in identifying and being as honest as possible with yourself about the sentiment is that such enables you to mine it for possible productive inputs into your present and future. Have you taken responsibility for your own happiness? Are you pursuing it as effectively as possible? If not, where is the disconnection?

Anything there to guide your own parenting? How do you think your own children will answer this question?

You only have so much emotional oil. How will you burn it?

I think I’d like to start 2018 guarding mine a lot more carefully than I have been.

And the angel said to her, “Do not be afraid, Mary, for you have found favor with God. And behold, you will conceive in your womb and bear a son, and you shall call his name Jesus.” – Luke 1:30-31

Merry Christmas. God be with you this season and throughout 2018. 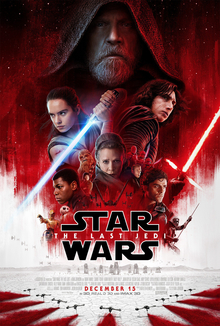 Lea, the boys, and I are just back from a Saturday morning matinee of Star Wars: The Last Jedi at Monaco Pictures.

The Saturday morning matinee is proving quite an effective counter to my dislike of large crowds early in a blockbuster’s release. I would love to just wait—makes little difference to me whether I see it now or in two or three or four weeks—but the spoiler menace lurks. You have to go see a Star Wars film quickly as inoculation against spoilers. Otherwise, your only alternative is to withdraw from society until you see it.

Of course, with a Star Wars film just about anything can be considered a spoiler. Different things matter to different people, and nothing matters to no one. So, as with my review of Episode VII, I’ll keep this general.

Episode VIII is assertive filmmaking. While the previous movie never felt tentative per se, it carried a little establishing baggage that is only fully apparent with its sequel available for comparison. The Force Awakens “knew” it had work to do—the unenviable task of proving that the most beloved film franchise in history had been passed to competent people who weren’t going to screw it up.

“We got this,” says director and writer Rian Johnson. That’s how it feels from the first minute. There is a confidence here that speaks to a deep understanding of the Star Wars universe, as well as a willingness to manipulate its most established and revered components freely. There are some amazing new things. There are pleasingly evolving old things. And there are fearless turns taken. The story doesn’t mirror The Empire Strikes Back like The Force Awakens does A New Hope, but there are definitely thematic parallels. The Last Jedi is a darker movie, just as Empire was. The narrative is satisfying but obviously only paused, just as it was that summer of 1980.

The balance of drama, action, suspense, and humor is good. In terms of how these elements work together, there really isn’t a “typical” Star Wars movie. They are adjusted to serve the narrative from film to film, and the adjustment is much more effective in the original trilogy than in the prequel trilogy. In this regard, the kinship is with the originals.

Our friends Rey, Finn, and Poe are back. (And wow, I do hate crushing on a woman along with the entire free world, but I adore Daisy Ridley as Rey. She’s so lovely, and her character is tremendously appealing.) We get to know them a bit better. They make a few new friends. Some big pieces of their respective stories fall into place (or, in some cases, point in interesting new directions). They’re ours now. They belong. We’ll enjoy them for decades.

I should mention that this film has generated considerable discord in some quarters. It’s impossible to go into details without significant spoilers, so I won’t. I will say that I don’t share any views that this film is inherently defective, or has somehow betrayed what has come before it. Perhaps I’ll write some more about it when it’s not quite so current (though I’ll say I have a feeling time is going to heal these perceived slights).

I don’t necessarily want to sound like a gushing fanboy, but I think this is another outstanding effort. I have no complaints that aren’t nits, and there really aren’t even many of those. I’m not sure how The Last Jedi could be much better. We’re looking forward to owning it and enjoying it again at home.