A friend of mine lives in a lovely neighborhood that includes several ponds and lakes.

The ducks and geese defiantly refuse to understand that these bodies of water are not for them. So when they started doing what waterfowl do – you know, hang around the, uh, water – then Something Had To Be Done.

His homeowners’ association decided to spend a fair bit of money on these little buoys with slowly flashing beacons on top. The lights are supposed to mimic a predator’s eyes, keeping the birds away.

Which makes the birds swimming serenely around the buoys, or breezily lounging on the shoreline, an especially comical sight.

When it was pointed out at a follow-up meeting that the buoys are ineffective, the defense was that they are actually working very well. Because you see, without them, the problem would be even worse.

Any 2016 Democrat will have to run on Obama’s record to some significant degree, and this is exactly the trope you can expect. The economy is shrinking. There are record numbers of people out of work. Jimmy Carter now looks competent at foreign policy. Obamacare not only doesn’t solve the problems it claimed to, but has actually aggravated nearly all of them.

But wow, just think how much worse it all would have been without the firm, wise, steady policies of Barack Obama! You know, he didn’t cause these problems…

…and that’s how “Bush did it” stays in the campaign narrative in 2016.

It should be clear I don’t think much of this idea.

Perhaps an industrious bot has harvested my email address and associated it with a mention of the site. For whatever reason, I’m getting a pretty steady stream of spam from them lately. The one I got this morning said:

AshleyMadison.com guarantees you will sleep with a married woman. The #1 rule if you’re having an affair is never to do it with a single woman. Instead, date a married woman who has just as much reason to keep your affair a secret as you do.

It kills me the way they set this up. “Just as much reason to keep your affair a secret as you do” means there is something to lose here, right? Well, here’s a crazy idea. Why not put your energy into trying to save this thing you’re implicitly acknowledging has substantial value, rather than actively subverting it? Hey, guess what? I bet you find it easier to live with yourself, too.

On this, as with most things, I am libertarian. I’m not going to call for the end of AshleyMadison.com, and I would never suggest you be legally forbidden from cheating on your spouse.

But I’ll tell you it’s a bad idea. Turn inward, not away.

…and it’s exceedingly unlikely I ever will be.

I lived at home while I went to college. I had trouble finding a job in my field when I graduated. But my stepmother and I were about to kill each other, so I had to move out. When I did so, I was 21 years old. I was the oldest of any of my siblings at move-out age. But I’m also the only one who never went back.

I was making $6 an hour at a bookstore when I moved into my first place. It was a 40-year-old townhouse across University Dr. from UAH, and my rent was $310 a month. The stairs were too steep, like there should have been one more. The industrial-strength gas heat would keep the apartment at 82 ºF and 15% humidity for $2 a day. I had undocumented free Showtime the whole time I lived there. (Saw Basic Instinct and the first big Denis Leary special as a result.) I never saw so many cockroaches in my life. I bet I killed ten a day for the first couple of weeks I lived there.

There were times when I would pay all of the bills and put enough gas in my car to get back and forth to work, and I would have, say, $10 left for food.

There are some interesting challenges there. Talked about those more extensively in another post.

Now there are definitely some mitigating factors. I had (basic) cable this whole time. I took the newspaper. I reliably found money for cigarettes, though in my defense it was much cheaper to smoke then. Most importantly, if I had ever been in imminent danger of being cold or hungry, my dad would have helped me. I knew that. I am delighted to have never taken such help, but I also realize that having that in my pocket enabled me to be “braver” than I might have been.

And Hillary’s bellyaching pisses me off.

So I’m sure it’s really resonating with the genuinely poor. 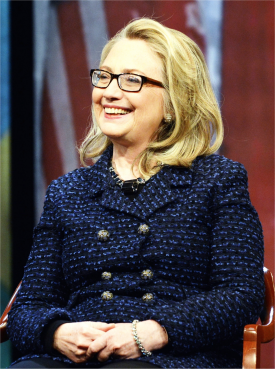 Evidently, Hillary Clinton has someone or a group of someones in her ear telling her it’s important she be seen as just walkin’ around folks.

So her opening play was to claim she was “dead broke” when the Clintons left the White House.

That she would do something so clumsy is not that surprising. She’s never been particularly slick politically. What does surprise me, though, is that she’s apparently not smart enough to leave it alone. This weekend she tore the nascent scab off with a claim of not being “truly well off.”

Now note the depth of this blunder. It’s an unforced error to discuss it again in any capacity, when it’s clearly absurd to suppose the Clintons were paycheck-to-paycheck in January 2001.

But note also she’s making a current claim of not being “truly well off.” She’s saying she’s not truly well off right now.

Now, from the start, the straw man that many Hillary Clinton apologists have erected to attack is that conservatives are hypocritically bashing her for her wealth. That is absolutely not the case. It is her apparently dogged insistence that what she has is not reasonably considered wealth that exposes her to such sustained ridicule.

No one who owns two multi-million dollar homes, or receives a $14,000,000 book advance, or who can command $200,000 for a single speech, is anything but wealthy. When these things are true of you, trying to claim the mantle of a regular old working stiff is not only ludicrous, but offensive.

Mrs. Clinton, Democrats at large: if you’d stop demonizing the wealthy as a core practice, you wouldn’t find yourselves in these corners.