There are many things lost on today’s left.  The one notion I think I most wish I could correct is that opposing a government program to do x is the same thing as opposing x.

Liberals, I think a lot of you don’t want to explore issues at all.  I think you want to believe anything the left-wing hate machine churns out about conservatism.  I also think a lot of you are so eager to lay any concern for the needy on the government so you can rationalize not doing anything else about it yourself.

But if you consider yourself a liberal who is genuinely after greater understanding, try to hear where those on the other side of the aisle are coming from.  Despite the hysterical shrieking from far too many on your side about fiscal conservatives actively killing the needy with their ruthless policies, the right is keenly interested in opportunity for everyone.  It’s just that we insist on asking tough questions about the effects of being on the government dole long-term, unfunded mandates in the tens of trillions of dollars, and such.

(There are also all those pesky questions about personal liberty that always seem to “intrude” in such discussions.)

Jesse Jackson is delighted that a record number of Americans have gone on food stamps during the Barack Obama administration.  That such a sentiment enjoys credibility in polite company anywhere is a travesty.  Fostering government dependency is stupid, and celebrating it is evil.

Listen to a fiscal conservative talk, liberals.  Is s/he advocating pain and death for those less fortunate?  Or is s/he questioning the wisdom of perpetuating—nay, expanding—demonstrably ineffective government programs?

Or seven, or whatever it was after they green-white-checkered it.  I suppose it was the jet dryer fire, and its resultant delay, that finally did me in.

After watching the Daytona 500 for the past week and a half, I missed the end because I just couldn’t stay awake.  I’d already nodded once when the cars starting slamming into each other again with 4 laps left.  So I turned it off, took out my contacts, and went to bed.  I doubt the race went back green before I was asleep.

Yeesh.  I hope I’m all-the-way accustomed to this no-caffeine thing by the time college football rolls around.  On the plus side, I didn’t get a headache until almost 5:00 yesterday.

Honestly, dudes and dolls, BoWilliams.com is a slog right now. I tend to blog at either the beginning or the end of the day—precisely where this adjustment is hitting my schedule hardest.  Trust I realize that every other post being about caffeine cessation is not interesting.  I’m thinking about it.  Hang with me. 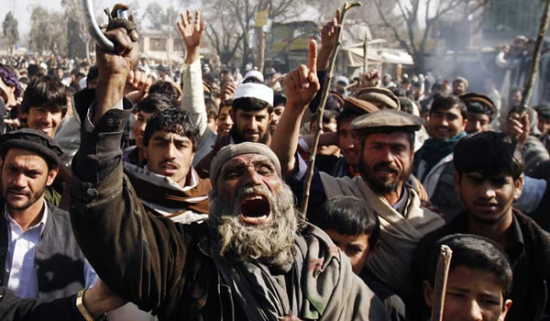 Folks, I apologize.  The topic of our esteemed president’s apology to Afghanistan over the inadvertent burning of four Korans—an act for which practitioners of this religion of peace have already murdered 25 people as of this writing—deserves more than dropping a couple of links.  However, a) I’m too pissed off to get anything of sustained substance down; and b) it doesn’t matter anyway.  If you’re a self-hating American, eager to find your country at the heart of all villainy in the world, then you’re a lost cause.

(Do have yourself sterilized if you haven’t already.)

Andrew McCarthy usually gets it right, and he nails it here.  We’ve lost our minds.

And, of course, there’s this.  Thank you and bravo, young lady.

Nearing the end of day five with no caffeine.

You know, if you want a drink with no calories and no caffeine in a restaurant, you better like ice water.

Still getting headaches, but less frequently, and they are more easily vanquished with aspirin or ibuprofen.

I’m ready to stop dragging.  It’s not continuous, and interestingly, it’s never been first thing in the morning.  However, when it hits, it’s tough.  While I’m waiting for this end of it to improve, I’m trying to treat it as a wonderland of new experiences and sensations!  (That works about as well as you’d think it would.)

Haven’t noted any sleep improvement yet.  I hope that comes soon.

Too far in to stop now.