Carey Cilyok, a friend and colleague of mine, just started Carey’s lack of wisdom. It’s primarily a tech blog, but he says he’ll goof off a bit too. (Time well tell whether that means yucking it up about three business objects walking into a bar or some shit.)

He’s an outstanding software developer who loves exploring new tools and technologies. Moreover, he loves to talk about it. So if that sounds good to you, check in frequently.

He’s also kind of a smartass, so watch out for that too. Frankly his self-deprecation so far, including the name of his blog, has surprised me a little. Don’t get used to it; I’m confident it won’t last.

When I moved out, I was nursing a shattered heart from a broken engagement and making $6.00 an hour at a locally owned bookstore (since closed). It was the job I had all the way through college, and though I had gotten my degree six months earlier and hadn’t yet found my first technical writing job, it was past time to get out of my dad’s house. So I moved into something maybe a click and a half north of a housing project, mostly because it was all I could afford.

I loved that place. It was a smallish townhouse, about 40 years old and with gas heat so loud you couldn’t hear the television. Every three or four days it reeked of curry from cooking two doors down. I heard a gunshot once in a while. I encountered at least one cockroach most days. But it was mine. Shit was always where I left it. If I wanted Froot Loops and a Michelob Light for dinner, that’s what I had. You know what I mean.

But even living “in squalor,” as my college friend Micah put it, I had a very tight budget. I’d have thoughts like “OK, I paid bills, and now I have $8 left to eat on for the week.” Haven’t touched ramen in 14 years; let’s just put it that way.

So I had to have some more money, and still not having my first in-my-field job in hand, I decided to sell cars. My aforementioned friend Micah was doing well at it, so I called him, and three weeks later there I stood with a tie, a shirt pocket full of business cards, and a boss I needed to “check with.” I was officially employed in the second-most-hated profession in America! Woohoo! This is progress!

The car business is hard. You can do it half-ass—well enough to keep your job and eat—without it hurting you too badly. But to make the big money (and believe me, it’s there to be made), you have to marry the business. And I knew guys who did. How many jobs can you name that can pay you six figures in your early 20s? Pretty short list, isn’t it? For too many, the stress of the job, the hours, and chasing that kind of coin meant, and means: alcoholism, divorce, and just about any kind of failing health you can name, including mental. I’d guess that of the guys who make the big money, it’s about one guy in ten who also manages full normalcy in his life. Micah is one, incidentally. My brother-in-law is another.

I had to work some people to death. I sold an Integra to a local TV personality on perhaps her ninth visit to the dealership, and she stole the damned thing. On the other hand, I made about a quarter of my money for the month on another couple for which the hardest thing I had to do was watch her drive a Canterbury Green Legend and a Sherwood Green Legend around the parking lot and offer my opinion on which one she looked better in.

I said I was home, careerwise. I can’t remember exactly how I felt; I might have even believed it. But I wound up getting a follow-up call from a company with whom I’d pursued employment almost a year earlier, and I jumped. Aced the interview, and it was over with. I started working in software documentation in January 1994.

Things have worked out better for me on this path than they would have had I stayed in car sales. But I still remember my short stint fondly as a great course in human nature, and I enjoy friendship with some of my former coworkers even today. It was all just the right thing for me at the time.

Now I’m sure some college football prospects get big heads and develop attitude problems. It’s an egotistical business, after all. But you reckon this guy’s got any additional fuel for that fire?

Original here. Thanks to Corry for the word.

And speaking of Corry, a just-light-enough-for-me-to-get-away-with-saying-I-was-kidding punch on the shoulder to him for hoisting Dolly Parton’s “Baby I’m Burning” from the depths of my subconscious, where it lay peacefully comatose for 20 years and likely would have continued to do so for the rest of my life.

If I just did you the same favor, you’re welcome. And don’t worry; it’s not so bad in hell. They have a Shoney’s and everything.

Since we started seriously dating–about 12 years ago now–Lea and I have had a catch-all term for a common sort of restaurant on the American landscape. The place has competently prepared but generally unremarkable American food, full table service, a bar, and often some wanly applied theme. It also has the characteristic for which we named them: miscellaneous crap hanging all over the place. Oh look, an old YIELD sign. Hey, there’s a few 45 RPM records. Wonder where the rest of that tricycle is?

We call them stuff-on-the-walls. We generally use the term when deciding where to go for dinner. “You wanna get barbecue, Asian, or just go to a stuff-on-the-wall?” I suppose it’s a negative commentary on the uniformity of such places, too. There’s really not much significant difference in the experience between Bennigan’s, Ruby Tuesday, Outback, Applebee’s, Chili’s, etc., and never mind that this place is an “Irish pub” and that place is a “neighborhood grill” or whatever.

Obviously they have their place, and it seems to be a pretty big one. The market doesn’t lie. Uniformity also means predictability, and sometimes everyone wants that. (However, I will confess feeling a little smug whenever I hear anyone but the very young or very old describe a stuff-on-the-wall as “my favorite restaurant.” Let’s maybe think about getting more than a mile from an interstate once in a while there, skippy. There’s bunches more out there than Extreme Fajitas for dinner and a knob-shopping trip to Lowe’s afterward.)

So what about this term “stuff-on-the-wall”? Well, as far as I know, we wrote it. I’ve tried a few times to insert a term I liked into the vernacular, and this is the most promising one yet. We might have done it. Somebody said every expression first.

But see, there’s a problem making an unconditional claim on it. If a term is witty and descriptive, it’s also going to have a certain obviousness about it, hence there’s a risk of multiple concurrent or near-concurrent introductions. So I really don’t know–indeed, can’t know–whether we initially composed “stuff-on-the-wall” to mean that kind of restaurant. Such is the organic and dynamic nature of language.

I believe there’s some non-negligible chance we made it up, and that’s about the best we can do. It does occur in the Urban Dictionary (more or less), but with only two votes at this writing it hasn’t been there long, and as I said earlier we’ve been using the term for more than a decade. So it might be ours. Whatever the case, use it. I like it.

When you look at something, how badly does your brain want to establish a lighting vector? Very, very badly, as the Adelson checker-shadow illusion demonstrates: 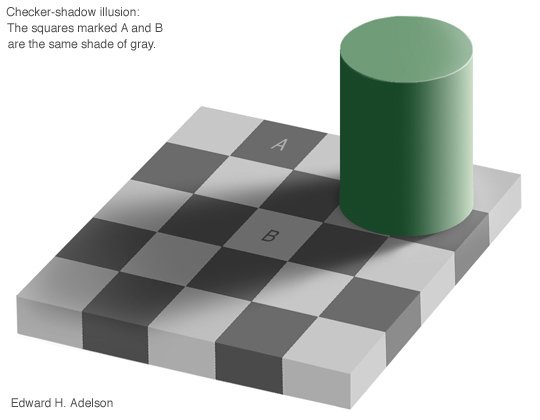 Dr. Edward H. Adelson is a professor at MIT, and came up with this illusion 12 years ago (so it’s been around a while, but it’s so uncanny I find it worth coming back to anyway). More here, including proof, explanation, and more illusions. 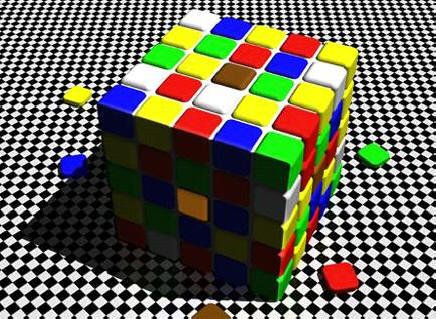