On a recent family excursion out to eat, our server was an attractive young lady of perhaps 22. I’ll call her Lisa. She was comely, but also witty and warm. She was fun to talk to, and she did a fine job.

We had been there perhaps ten minutes when a guy came in by himself and sat at the bar (some distance from us but well within earshot). Now my immediate inclination is to describe him as “some older guy,” but the truth is he had maybe ten years on me at most. I’ll call him Ralph.

So we’re there at kind of an off time, so Lisa’s the server, bartender, and hostess. So she drew Ralph too. And as Ralph started talking to her, I could tell he was a smidge overly excited to be doing so.

Ralph opened with too much chit-chat about this offering or that on the menu, then progressed into excessively extended conversation about his beer selection. She/we eventually heard about where he lived, what he liked to do, where he’d traveled, how he’d like to build a shop because he liked to work on old cars…you get the idea. Lisa engaged him expertly. She was preserving her tip, to be sure, but I think she was also just a nicer person than I am.

Then Ralph said something about watching his weight. Lisa commiserated, which he took as a license to begin discussing her figure.

Now he was never out and out gross. But the truth is, there’s really not anything a 50-something guy can say to a 20-something girl about her body that she wants to hear. (It’s a perilous topic for any man to any woman, but the inescapable dirty old man vibe super-nastifies it, don’t you think?)

Lisa was a pro, never hinting at any offense. I noticed she brought her boyfriend up pretty quickly when the conversation took that turn, though. I’m sure that’s a standard and effective play for her.

It’s just a shame she has to have it.

I wrote once of being a bad storyteller and not realizing it. I definitely don’t ever want to be a dirty old man and not realize it. I love women, and I enjoyed interacting with Lisa. I think if you described our encounter to her, she would remember me, and she would recall that I liked her. But I think her assessment would be based in that we conversed relevantly and cheerfully, that we laughed together, and so forth.

(As opposed to that I dug her butt or helped myself to a glance down her shirt.)

Really, I’m not that worried about sliding down this slope. I’m 46 years old. I think if I were headed in that direction, there would be some clear indications, and I don’t think there are.

But I do appreciate the reminder to keep my self-awareness charged up. It was also a good opportunity to talk to the boys about how we do and don’t talk to women.

(I was truly heartened by how yeah-Dad-we-know they were about it.)

At the end of ninth grade, Mrs. Austin went to collect our literature readers. If yours was lost, you had to pay a fee, but it was a pittance—nowhere near the replacement cost. Like $7 or something, OK?

So she asked for mine, and I gave her $7 instead and said mine was lost. She said no, I see it right there on your desk, Bo. I said no, it’s, uh, lost. Here’s my fee for being so irresponsible with it. She smiled and took my money, allowing her admiration of my desire to keep the book to very slightly defeat the cloudy ethics of the transaction.

And it turned out that was enough for me to locate and purchase a couple of them from independent sellers on Amazon.com. Behold my copies of Panorama and Images! 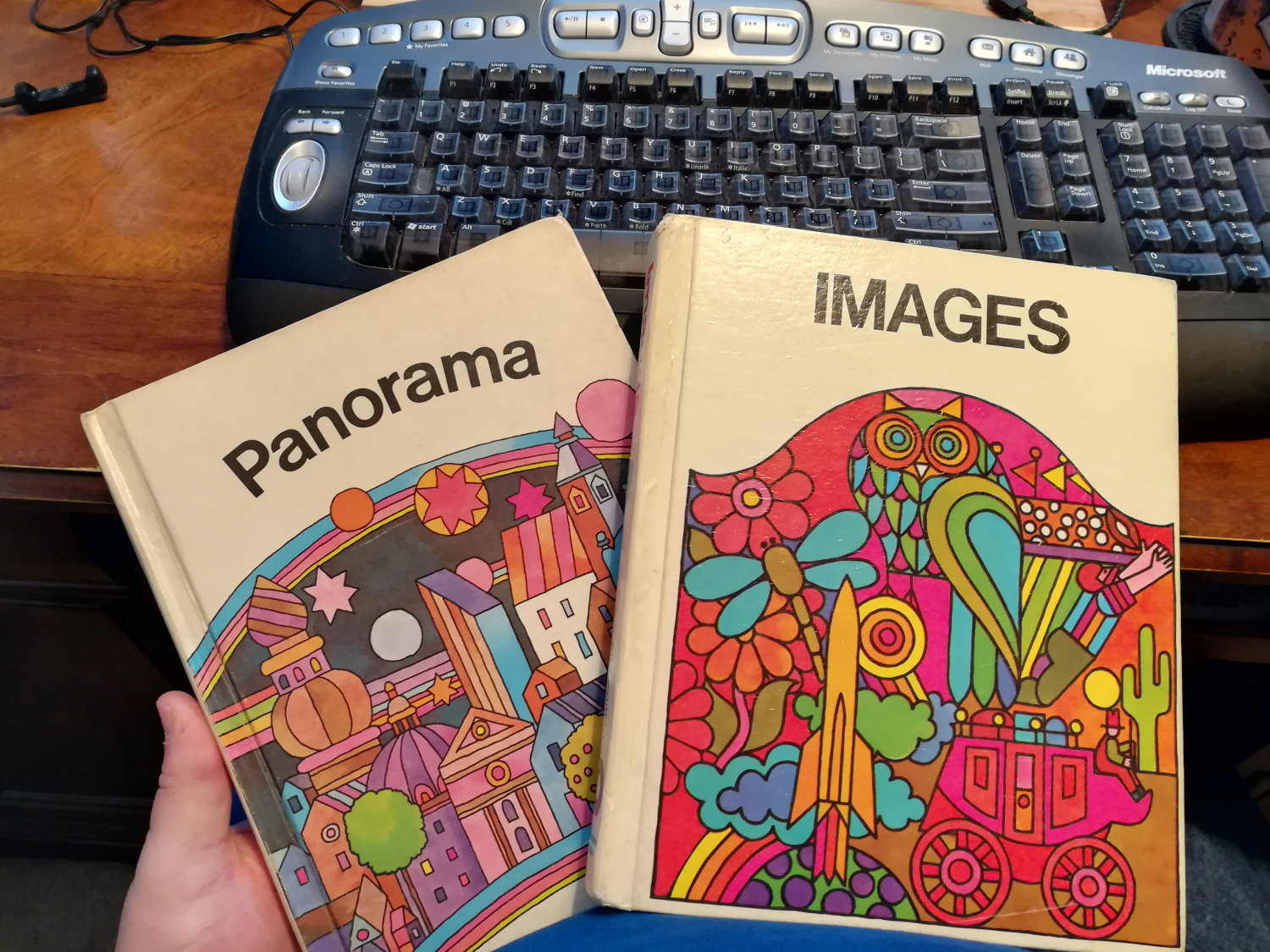 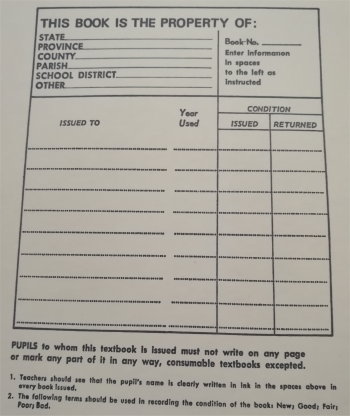 Oh, these are such great fun to look through. They’re in fine condition, Images in particular. It’s worn from handling (being moved around in stacks and so forth) on the outside, but I don’t think the pages have ever been turned in it. (The virginal issuance panel on the inside cover lends credence to this supposition.)

I think Images is intended for fifth grade, and Panorama third. Seems like Fiesta was between them. Here’s a page showing them all.

There is a lot of great literature here, as well as wonderful artwork. And there is the occasional little flash when I’ll turn a page or read a sentence, and really remember, viscerally, what it was like to be nine years old. 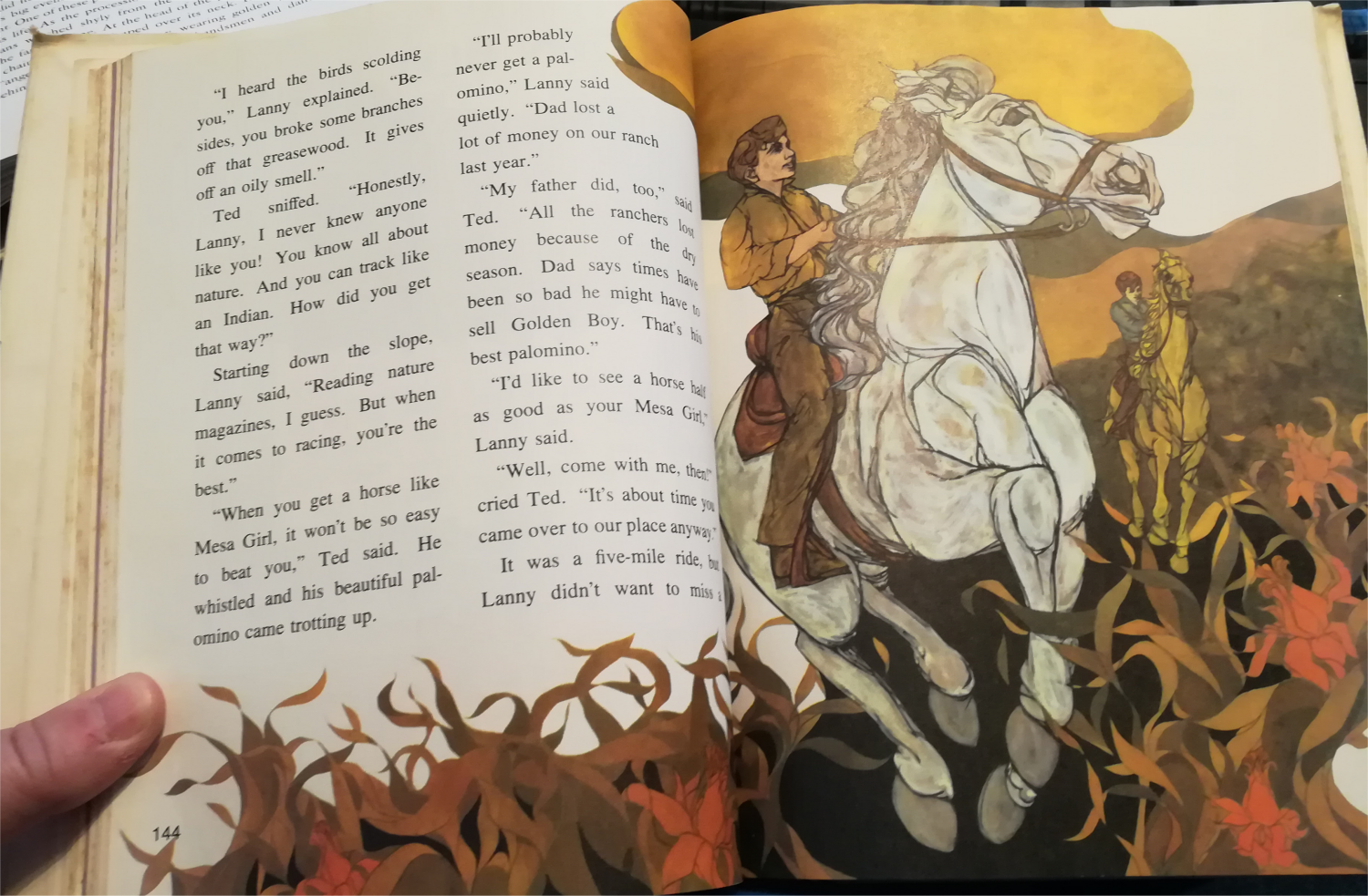 I’m not sure how many of those moments await me here. That’s why I haven’t just sat down and read them straight through, and have no plans to. I want the buried treasure to last as long as possible.

Citing doctor’s advice following a diagnosis of Parkinson’s disease, Neil Diamond has abruptly retired from touring just a couple of days shy of his 77th birthday. In doing so he abandons the Australia-New Zealand leg of his 50th anniversary tour. 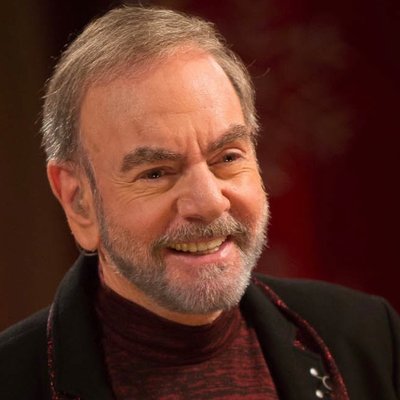 Neil Diamond is one of the greatest showmen of my lifetime. If your first time to see him was forthcoming on this tour, then you’ve missed him, Aussies and Kiwis. I am disappointed for you. Lea and I got to see him in Nashville with Dad and Martha, and it was a fantastic show.

I’m sad that he’s ill, but so relieved he’s still with us. I clicked his name in my Trending Now list on Twitter last night with more than a little dread.

That got me thinking again about how we can be “close” enough to celebrities that their deaths actually affect us emotionally. Before the fact I never would have guessed I’d cry when Prince died. And I didn’t, until I got under the headphones, by myself, with “Let’s Go Crazy.”

(I saved that song for a quiet experience alone, so part of me probably knew it.)

No, the people aren’t there with us. But, sometimes, if their influence is great enough, they can be directly adjacent to our experiences in our hearts, and we naturally get an emotional tendril or two into them.

I’ve written before of Neil Diamond. He’s been right there, my entire life. He’s in otherwise good health, and he believes (and has said as much) that he will remain prolific for years to come. So hopefully it will be a good while before we have to say goodbye to him. But when that day comes, I expect he’ll be one of the few who upset me to that degree.

Well, I’m 16 pounds off my all-time high. I weigh less than I have in over a year.

Sadly, I’m apparently to the part where I stop losing weight because my body is getting used to exercise again and wants to protect the muscles it is rebuilding, so it hangs onto water like grim death.

(That is what I am telling myself. Of all the narratives I have encountered I find that one the most agreeable, so it must be the right one. Hmmm.)

I have to keep doing what I’m doing for another two weeks or maybe a little longer, and then I’ll be rewarded. That’s what it says here on the screen, so I know it’s true.

I’ll finish Ozark this week. Have to find another treadmill show.

I don’t think I’ve ever used a treadmill seven days in a row. Heh.