Sitcom and motor oil commercial cutie-pie Leah Remini is working on a series exploring some of Scientology’s less pleasant aspects (particularly its effects on families).

You may recall that Remini was in the news a little while back when she wondered rather vocally what had become of Shelly Miscavige, wife of Scientology leader David Miscavige. Shelly Miscavige has not been seen in public since 2007.

I’ve written about Scientology on BoWilliams.com occasionally (here and here). You don’t have to look very deeply into it to conclude that it’s quite bizarre. The established narrative includes extraterrestrials, a universe far older than any respected theory accounts for, and so forth. It’s basically what you’d think a religion thunk up by a science fiction author would be like. Hmmm.

Remini is to be encouraged in her efforts to shine bright light into the dark corners of Scientology. The Church of Scientology isn’t that big, but it’s well-financed and extremely aggressive with rhetoric, litigation, and actions against its members and detractors. (Go read about Gold Base sometime. Ask yourself if it sounds like the United States.) 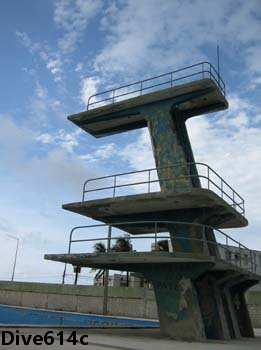 We found ourselves at Fulin’s last night because of a dinnertime power outage at home. As we ate, they were showing competitive diving—possibly Olympics tryouts—on television. Nathan mentioned that the last time he’d been at a pool with a 10M diving platform, they weren’t letting anyone use it. Apparently this is common now; liability concerns.

But when I was 18 years old, they let any schmuck jump off. (Or dive off, I suppose. I never learned to dive.)

Point Mallard‘s not far, but I haven’t been much. Maybe three times ever? One of those trips, just about 27 years ago as I type, I climbed up there and walked off the end of the 10M platform. I didn’t give it a thought. I didn’t hesitate. I didn’t peer over the edge and consider it. I walked calmly from the ladder to the end of the platform and just kept walking.

I don’t remember very much about the trip down except for the sound. The sound was scary, and I hadn’t anticipated it. I learned when I got out that I had hit the water feet first, with my legs about a foot apart.

What I do remember quite vividly is sitting down 12 feet underwater, holding my testicles, and crying.

Kids are so stupid.

I’d been kicked in the nuts before. It hurt. I’d jumped my BMX bicycle over a whoopty-doo and racked myself on that horizontal bar when I landed. It hurt. But I’d never felt anything like this. This was next level.

Fortunately, it occurred to me in time that, severe pain or not, I was going to drown if I didn’t get to the surface. I did, and actually had the foresight to move toward one of the edges as I ascended so I wouldn’t have as far to swim.

Through the laughter last night, I think the boys got the point. Even if there aren’t any 10M platforms lurking, there’s a rock of similar height at Smith Lake that could eventually be tempting.

Boys, don’t do it. If you must, keep your legs together.

As hard as I try to evaluate different views equitably, I’ll confess there are a few phrases that make me tune out nearly immediately.

There is an inherent arrogance in the phrase that flirts with outright dismissiveness. Do you see how it leapfrogs any possibility of considered dissent? This is settled. These poor, unfortunate rubes don’t know what they’re doing. I mean, that’s the only explanation for it, isn’t it?

To be fair, most of the time confirmation bias has a lot to do with how these closed-minded views form. So the arrogance and dismissiveness isn’t intentional, but that doesn’t make them any less insidious. People like to nod and clap each other on the back.

Have a good weekend.