August wasn’t fun. Too much drama, and too much of that was self-inflicted.

Glad to have a new month.

In March 1998, Charles, T.J., and I drove to a club in northern Atlanta called The Outer Edge to see Saxon supporting their new album Unleash the Beast, on their first U.S. tour in more than 12 years. It was one of my favorite live music experiences ever.

Saxon formed in 1976. They are true giants of the heavy metal world who never got their due in the United States. They are much bigger in their native Great Britain, and throughout Europe.

They’ve remained prolific, and indeed, they’re doing absolutely outstanding music, even 40 years in. They do a new studio record every couple of years, and their next one Battering Ram is due in October. The advance single is the title cut, and I dig it:

If you like this, then you’ll be a Saxon fan in short order. They’re the real deal, and I couldn’t care less how old they are. Just listen!

I check periodically to see if they’re coming to the United States. They never are, but it’s a habit to look, you know? Except this time, guess what? They’re going to be in Atlanta less than two weeks from now.

It’s a Thursday night. Can I put that together? If I take some time off from work, and get over there early, and…

…nope. Not going to work out. You see, it’s the opening night of a festival, and they’d be the fourth of four bands to go on. Might be after midnight before they even start. I don’t have the budget to do anything but boogie over and boogie back, and that’s not going to work out with that timing. I can’t swing a hotel room right now just to see a band, even if it is Saxon.

Here is where the responsible dad faces off with the 35-years-and-counting metalhead, and wins. 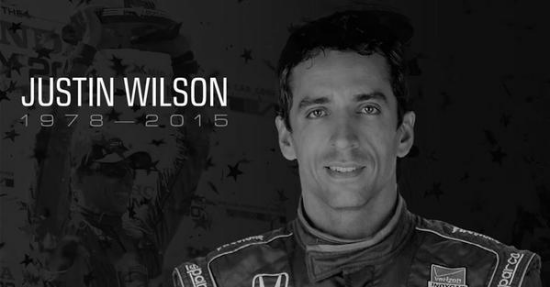 IndyCar driver Justin Wilson has died of injuries sustained in an accident during Sunday’s ABC Supply 500 at Pocono Raceway. He was 37 years old.

Though I never met him, I got to see him race in person three different times, including a fifth place at the 2013 Indianapolis 500. He was a talented and fair-minded competitor. His colleagues are tonight universally remembering him as the nicest guy in the paddock. I’ve read more than once on Twitter of people never hearing him say a cross word about anyone or anything.

I started following IndyCar in earnest in 2008. Justin Wilson has been right there the whole time, and every time anyone had occasion to say his name on a telecast, I’d immediately have to follow it up with “ooh he wondemous, I gua-ron-tee!” Heh. Nobody ever thought it was as funny as I did. Now it’s kind of special, though.

God be with his family (especially his two young daughters), his friends, and anyone he ever touched. RIP.

I’d call the AshleyMadison.com debacle a train wreck, but that’s not enough. It’s like a train carrying a tanker of airborne Ebola virus crashed into a trailer carrying an unstable nuclear warhead.

It’s now apparent that the average paid AshleyMadison.com user spent hundreds of dollars on the service, and some spent thousands. “What are they spending money on, exactly?” Lea asked me. “How should I know?” I replied. Heh. (I can remember someone asking me once what “the average hooker” charged too. Really?)

Well, the Wikipedia article is instructive (and though I haven’t checked the edit history on it, probably newly extensively so). Men have to pay to communicate with women. If a man wants to send a woman a message, that costs money. A woman can send a man a message for free, but the man has to pay to read it. After two members have established contact, further messages between them are free.

Ah, but there are wrinkles—big ones.

It seems 90-95% of the service’s members are men. Also, all of the women aren’t real. AshleyMadison.com routinely uses computer-generated female profiles to make it seem as if more women are on the service than actually are. Gets kind of hard to follow the lies, doesn’t it? How much outrage is appropriate for a customer seeking to be systematically dishonest finding out the organization he sought to do so with is also systematically dishonest?

Well, two Canadian law firms think $576 million of outrage is about right. I wonder what the number will be on the eventual American class action suit?

Happy Monday. I promise I’ll post about something else tomorrow.