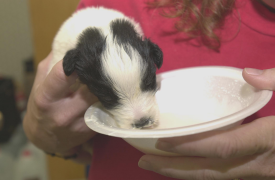 I introduced this post series last week. And now I’m going to give you something of an extended introduction for Part I before I go to extended treatments of single topics in Part II next week.

As I considered it last week, I became steadily less pleased with what I hadn’t said in my introduction. You see, I am hoping for some skeptical readers over these next several weeks. I’m going to say some controversial things. It’s critically important to me that my readers understand that these are the thoughts of a reasonable person. You don’t have to be out on an ideological limb to nod at what you’ll read. You just have to consider the motivations of those battling for your minds, hearts, and (mostly) pocketbooks.

So thanks for your patience, and please stay with me.

Part of how I got to be 42 years old without ever sustainedly considering animal welfare issues is that I assumed it was one noise I heard. I assumed that when someone espousing what I considered to be ridiculous beliefs about the environment (for example) said something about animals, that it was probably equally ridiculous. I further assumed that horror stories about farming, for example, had to be overstated or badly misrepresented. After all, it’s in a farmer’s interest to ensure the health of his livestock. Why would he act counter to that?

I think there is deception in degree—some inherent, some actively cultivated—when we consider these issues. We can understand a lot of what is happening with animals under our control by using rather less controversial beliefs and sentiments as context.

For example, few people who become truly informed about how most veal is produced continue to eat it without consideration. Veal calves are horribly crowded and often spend their entire lives indoors. They are tethered in crates, almost unable to move at all. They have lives most of us would never consider giving any companion animal, like a dog or a horse.

And yet, some heinous practices dominate our mass production of livestock now. We raise farm animals in conditions that are plainly inconsistent with basic definitions of humane treatment. Then, we administer many tons of drugs to the animals to improve their survivability in these conditions—drugs we then get to eat later. So you get a twofer with your meat:  animal welfare concerns and health concerns.

How about for our pleasure? Civilized people don’t support dog fighting or cockfighting. That’s a no-brainer, right? Setting animals upon each other solely for human entertainment is barbaric and cruel, particularly when the death of the loser is all but guaranteed. I’ll go ahead and include bullfighting here, too. Though it continues legally in some places, defended wanly as “cultural heritage” and what-not, it is clearly in severe and unrecoverable decline.

And yet, though we don’t generally stage fights between them, we freely and openly use our dominion over animals solely for our entertainment. A prominent example arrives at the Von Braun Center next week (and yes, you’ve now got an excellent idea of next week’s topic).

With zoos, there is a genuine and positive difference. There are horrific disasters attached to gas stations, and there are valuable educational and research facilities that also support tourism.

I don’t want to tell you what to do in this series. I think there are enough parties doing that in our lives already. I am, however, highly interested in disseminating, as dispassionately as possible, accurate information on many of the animal practices that have settled into our sociocultural narrative as normal. See what’s there for a rational person to absorb.

All right, I promise that’s the last bit of dedicated introduction. Next week:  the circus.