Lea didn’t go to stained glass class Wednesday night, which meant that she didn’t need me to put the Technical Writing Express in the garage (involving maneuvers around other vehicles with which she is not comfortable), which meant that I forgot to take the garbage cans to the street (which I habitually do at the same time).

So our week’s worth of garbage wasn’t picked up, because they won’t break into your garage to get to it.

So I decided to drive the truck yesterday so I could get rid of two bags.  I had to wait much later than usual to leave, because Nathan had thrown up overnight, and I needed to stay with him while Lea took Aaron to school.  Then, the truck just barely started.  It needs a battery.  It was pouring down rain, so doing it at lunch was out.  Unsure of how many more starts I had, I decided it’d be prudent to drive it home at lunch and swap it for the TWE.  I did so, thinking I’d get up early this morning, drive the truck to O’Reilly (which opens at 7), and swap it in the parking lot.

Then, after being fine for just under 24 continuous hours, Nathan threw up again last night.  So I’m watching him again, and leaving late again, and the truck has been relegated to Sunday afternoon.  It probably won’t start by then, necessitating either a) jumping it off; or b) ferrying the old battery, then the new, in the TWE.  Probably I’ll go with b) if it comes to that.

Waaaaahhhh.  What big problems I have.

Nathan seems fine, except for the periodic involuntary projection of his stomach contents.  The boys were H1N1-misted on Wednesday, and he may be reacting to that.  Or, could be just poorly-timed gastroenteritis (as if there’s a good time for it; yeah, that was a dumb thing to say).

Anyway, weekend’s almost here.  Hope you have a good one.

I’ll tell you, the list of things I wish I’d thought of only gets longer.

If you want to wow them at the Halloween dinner party, serve them a hand: 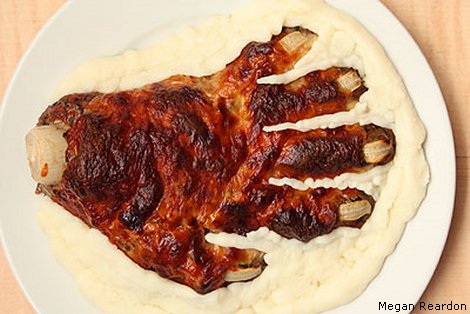 I love the attention to detail—the fingernails, the bone stump, and so forth.  You can get the recipe/assembly instructions, for this and other variations, here.  (It’s meat loaf.)

Finally, I am delighted—and a smidge titillated, frankly—to inform you that an adorable young woman did this.  That detail took me by surprise.  Love it!

Generally speaking we get the joke. We know that the free market is nonsense. We know that the whole point is to game the system, to beat the market, or at least find someone who will pay you a lot of money because they’re convinced that there is a free lunch. We know this is largely about power, that it’s an adults only, no limit game. We kind of agree with Mao that political power comes largely from the barrel of a gun. And we get it that if you want a friend, you should get a dog.

If this is your philosophy, then congratulations.  You’ve got your man in the Oval Office, and he’s assembling your team.  The destruction of American values you desire is going swimmingly.

But let’s not bleat any more shit about our esteemed president governing from the “center left,” m’kay?