About ten years ago, at a more bad than good job, I met Brent.  We were never close friends, but I traveled and worked with him enough to get to know him a bit.

Brent was, and is, an imposing fellow.  I’d guess he’s 6’3″ and perhaps 240 lbs., but not at all overweight—just a big guy.  He has classically attractive chiseled features, and a big booming voice that brings instant credibility to anything that comes out of his mouth.  I’m (thankfully) not wired for a lot of envy, but I envied that.  Brent could tell you the weather forecast, and you’d pay it more mind than you would the president talking about a nuclear attack.

He occasionally played it for laughs, which is closing on my point (promise).  Once Charlie and I were out on the sidewalk discussing a project.  He came up behind us, put a hand on each of our backs, and said “gentlemen, I’ve been doing a little research.  I’ve examined the findings, and I’ve talked to upper management.  I think there just might be something to this World Wide Web thing.”

So this was also right around the time our esteemed president decided it was a good idea to place his penis in Monica Lewinsky’s mouth, and Brent loved that too.  He’d come up and say “you know, for me, 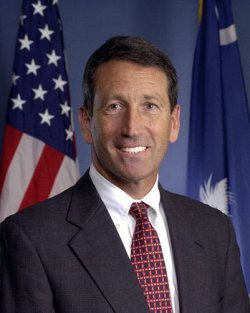 the tragic thing that’s being lost in this whole Monica Lewinsky scandal is that it’s just all so terribly romantic.” Heh again.  It was good for a laugh because it was so ridiculous.

Funny how the humor of a decade ago becomes the reality of today.

We know, thanks to an excruciatingly lengthy hand-wringing press conference, as well as multiple embarrassing emails, that South Carolina governor Mark Sanford has had an Argentinian mistress.  I applauded his wife’s absence at the press conference, and greatly appreciated what she has had to say about trying to put her family back together, and screw his political career.  That’s awesomely good sense about what really matters, and it’s too rare anymore.

Except Rush was talking today about how gaga some folks are about the dear governor’s love letters.  “The man was a real romantic with a knack for writing,” gushes “romance coach” Leslie Karsner.  The Associated Press can’t wait for you to know that “South Carolina Governor Tells AP that Mistress Is His Soulmate.”  Any words from anyone about the sanctity of marriage (well, besides his wife)?

Well, the usually-wise Mona Charen did ask “how about avoiding adultery?”  But I mean, hell, she’s a fringe lunatic conservative.

I was pushing hard to finish a project at work tonight.  I doubted that I could put it all the way to bed before I left, but if possible, I wanted to face just housekeeping (cleaning up unused files, that kind of thing) when I went in tomorrow morning.

Well, it didn’t work out that way.  Best laid plans, and all that.  About 20 minutes before I was planning to leave, my project threw me a curve.  I wasn’t happy about it, but it didn’t upset me to nearly the degree it would have ten years ago.  Tonight, I recognized it as something that I didn’t know how to solve immediately, but for which a solution would emerge.

And indeed, I’ve got it now, barely an hour later.  I know exactly what I’m going to do with it when I go in tomorrow.  The best part is that I didn’t have to do anything but see it as that kind of problem—one that my subconscious would nibble at until I got it, rather than one that would respond to primary mental horsepower.

No one taught me to do that, and I didn’t explicitly teach myself to do that.  I don’t know how I could if I wanted to, really.  It’s just something that has come with age and experience.  It’s having a taste of a problem, realizing that it’s that certain flavor, and walking away from it.  It’s one of the things that keeps me from saying I’d like to go back in time and relive childhood or young adulthood when those questions pop up on pass-arounds.

Apart from the obvious things, like watching my boys grow, it’s also the kind of thing that makes me think the best years really are ahead.

…and a lot of us have been there, during youthful days of limited discretion.  They were times of saying stupid things to women, running into walls, and public emesis, and hopefully they were long ago.

And then there’s sleeping in a garbage can drunk. 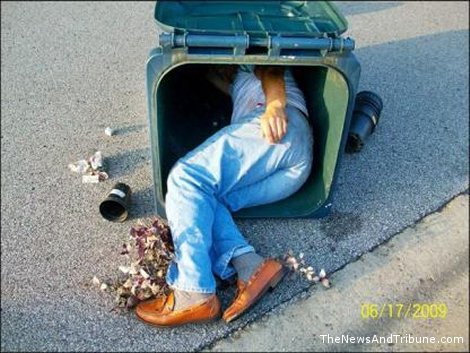 Jeffersonville (IL) City Council attorney Larry Wilder has resigned after a photo of him sleeping it off in his neighbor’s garbage can was made public last week.

Local police took the photograph as part of their documentation of the scene, which was consistent with department policy.  Its release to the public, however, was not, and remains under investigation.

Wilder will continue his private practice.

Our next door neighbor Heather called us about seven this morning, warning us to stay away from the area between our houses.  A skunk had entangled itself in a lawn chair of theirs (in the garage), and her husband Jeff had used a fishing pole to drag it out in the yard while he decided what to do next.  He succeeded in doing this without getting sprayed, so I was already impressed.

I stepped out with binoculars to have a look.  It looked to have only one leg caught.  Tail and head were up and free.  I closed our garage door, which suddenly looked like inviting cover to a potential newly freed skunk.

You know, skunks really are attractive animals.  I understand their appeal as pets.

I finished getting ready for work, and stopped by to speak with Jeff on the way out.  He was trying to determine whether there was anyone to call.  (The ultimate answer was “no, not outside city limits.”)  Then he said “Yeah, my neighbor over here on the other side has killed nine so far this year.”

I bade him good luck and went on to work.

So then Lea called about a quarter of ten.

“There’s a dead baby skunk in the dog pen.”

“Are you sure?  Maybe it’s a piece of that other one the dogs had squirreled away.  Can you get close enough to it to tell me what you see?”

We wrapped up the call, and I headed to the parking lot.  I didn’t like the sound of “baby skunk” at all.  That means there’s a den close by.  That means I’m going to have to do some very unpleasant poking around when I get home.

After putting on some might-have-to-throw-these-away clothes, I headed back there, and was somewhat relieved to discover it wasn’t a young kit.  It was small, but I think large enough to have been on its own for a while (maybe a foot long).

It was perplexing, though.  My dogs just flat ate the last one.  I didn’t look very closely, but this one seemed intact.  What the hell?  Our best guesses are that in the middle of the night, a) a bird of prey dropped it; or b) it was .410ed two doors down and got that far before it died.  By the time the dogs found it, it was carrion and not a fresh kill, so there you go.

After disposing of that, I began my detailed property inspection.  I’m now 99% certain there is not a skunk den under our deck or in our crawlspace.  I found no evidence of digging, no tracks, and no animals.  (I forgot to check the back shed; I’ll look there in the morning.  I was concerned with living quarters today.)

While I was cleaning up, Heather called back to let us know that Jeff had “taken care” of their skunk, and that the chair was gone too.

Wow, what a skunky summer so far.  And it’s so early yet.