Earlier this year, Lea was the fifth caller into a local radio show and won a “We’ll Take Half of the Gland of Your Choice” contest!  Woohoo!

Lea had a hemispheric thyroidectomy yesterday.  She complained of a sore throat about two months ago, and this lab and that confirmed that she had a cold nodule on the left side of her thyroid gland.

We had expected that a fine needle biopsy was next, but her doctor said the calcification on the nodule concerned him and that he typically just took them out, making a malignancy determination in surgery.  (Her initial appointment with her ENT was March 31, and he said “how about April 29 for surgery?”  My immediate thought was “uh, how about 3:00?”)

Oh, goody!  A whole ‘nother month to scare the shit out of myself on the Internet!

The on-the-table pathology was that it was benign, so her doctor took only that half, didn’t see anything untoward in the other half, and sewed her back up.  Something could still turn up in the complete pathology report, but it’s not at all likely.  Lea’s sore, of course, and she can’t drive for a week.  But she’s otherwise fine and feeling like herself.

Had the nodule been cancer, he’d have taken her whole thyroid, and she’d have spent an extra night in the hospital.  She’d have also had to do a 24-hour quarantine radioactive treatment in a few weeks, and (naturally) she’d have gone on lifelong thyroid medication.  We’re thankful to have avoided that path.

All of the hospital personnel were terrific, and as hospital stays go, I suspect it was about as good as it gets.  We certainly weren’t thrilled to be down there when swine flu turned up in the area, though.  We weren’t at all far from the pediatric ER.  (I did witness irrational behavior, but thankfully not on a large scale.)

Thanks so much for all of your thoughts and prayers.  They were, and are, much appreciated. 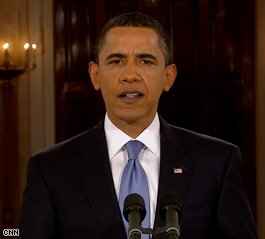 I had a vision in my mind of this post being a lot more than it is.  I even talked it up a time or two.  It was to be rigorously cited and ambitious in its scope.

However, my motivation to write/assemble such a post is lower than I expected.  For one thing, thanks to charisma, ceaselessly favorable mainstream media, poor Republican stewardship (both real and perceived), and (let’s face it) wanton ignorance of the U.S. Constitution, there is not yet any significant movement in Obama’s approval rating.  For another, this has been an exceptionally exhausting day (more on that tomorrow).

So a bit of semi-organized bitching will have to do.

First, Obama’s unfathomably massive spending and nationalization of the economy are complete disasters.  Folks, degree matters.  As distasteful as losing your hand in a combine would certainly be, it beats the hell out of losing your head.  I didn’t like the Bush administration spending either, but did it ever guarantee car warranties?  Does anyone doubt that GM’s “managed bankruptcy” is code for “don’t hurt the union constituency”?  Y’all nearly ’bout set for the Chevy Pelosi?

Second, Obama’s foreign policy—the “restoration of the standing of the United States in the world”—is, so far, thoroughly tasteless and potentially dangerous.  In 100 days, the Obama administration has repeatedly insulted our closest ally; bowed at the waist to the Saudi despot; “reached out” to “the Islamic Republic of Iran,” as if that never occurred to anyone; shared a handshake and a chortle with Hugo Chavez (as well as accepting the gift of a viciously anti-American history of Central America); and so forth.

Feel safer?  Well, I suppose you can hang your hat on Obama keeping the PATRIOT Act, the wiretapping, and all of those other things that were to be the undoing of western civilization at the hands of Satan Bush the Younger during the campaign, but that clearly seem like pretty nifty ideas from the Oval Office.

(Incidentally, let me know when there is any discord whatsoever among his fawning sycophants for these breathtaking betrayals.)

When President Obama was elected, we seemed to have a person who has never run anything before in his life, and who hasn’t the slightest idea where a dollar comes from (or, perhaps even more troublingly, what a dollar really is).  Nothing in his first 100 days has dispelled these notions.

He has no genuine appreciation of U.S. and world history.  (His memory for good American behavior is nonexistent; for bad or ambiguous behavior, meticulous.)

His political instincts seem shockingly poor.  Shall we look at his selective release of CIA memos as an example of his much-ballyhooed “bipartisanship”?  Or perhaps we’ll just hold up that smug “I won” as evidence of same?  The decision to refuse one-issue pro-life voters even a single semantic bone is a serious error, and one I’m surprised isn’t getting more press.

However, he is a handsome fellow, and he is a skilled orator.

In other words, a talented college student is the leader of the free world.

So goes the babealicious Frances Townsend‘s description of the low-flying 747/F-16 “exercise” in lower Manhattan yesterday.  I concur. 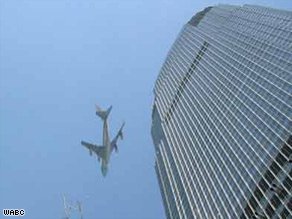 President Obama has ordered a review.  His aides have insisted he was “furious,” and he says he found out with the rest of us.

That may well be.  However, Louis Caldera, director of the White House Military Office, has already identified himself as the stooge responsible for the exercise.  Said “review” needs to conclude right now that his resignation is in the best interest of the country.

I don’t live in Manhattan, but I know people who do, and folks who live and work there walk around feeling like 9/11 was just about three weeks ago.  This was inexcusable and unconscionable.

No way around it.

I was going to try to keep it business as usual, but it’s not going to happen.  I don’t like it, either, because ordinarily I try to turn this crank pretty hard.  However, it’s not to be.  I apologize.  I’ll do what I can, when I can, and I should be back to a normal schedule by the weekend.

However, I have been at this since October 2006, and there are probably hundreds of posts you haven’t read, particularly if you’re a recent reader.  Please, have a look (click a month to the left).  Or, check out the Bo’s Favorites category.  I don’t add to it lightly.  As of this writing, it contains about 2% of my posts.

Thanks for reading, folks.  I appreciate you.

I’m not having much fun right now.

I know that worry is all but worthless in a practical sense, but as comparatively easily as I can now jettison it over quotidian nonsense, I’ve got a lot of it tonight that won’t go away.

Heaven forbid I have to pee in the middle of the night right now.  Awake is bad.  The harder I try not to think about things, the more vigorously I do.

I hope to be able to blog about one component of it late this week.  The other is more delicate and has been a lot more difficult for me to give to God, though my efforts continue.  In no possible interpretation of either situation am I directly responsible for anything that has happened, and I’m trying hard to remember that.

I had only ever heard the motivational poster version of the serenity prayer.  I found a longer version a little while ago.  I like it:

God, give us grace to accept with serenity
the things that cannot be changed,
courage to change the things
which should be changed,
and the wisdom to distinguish
the one from the other.

Living one day at a time,
Enjoying one moment at a time,
Accepting hardship as a pathway to peace,
Taking, as Jesus did,
This sinful world as it is,
Not as I would have it,
Trusting that You will make all things right,
If I surrender to Your will,
So that I may be reasonably happy in this life,
And supremely happy with You forever in the next.