I was about 8. I had been riding my bicycle in the cul-de-sac, and my dad was calling to me from halfway up our persimmon tree, where he’d been doing some pruning. I rode into the garage and came out with an old mayonnaise jar.

“Perfect!” I handed it to him. He was poking and prodding somewhat gingerly with a stick on a branch a couple of feet in front of him. I moved to the side to get a better view, and saw a creature so weird it looked plausibly extraterrestrial. He plopped it in the jar and put the lid on. It was about 4 inches long, as big around as a quarter, and mightily pissed.

Meet the hickory horned devil, the caterpillar of the regal moth.

Of course, we didn’t know what it was then. This was most of two decades before the web could have told us what it was, and trying to look up “weird huge caterpillar” in the Funk & Wagnalls doesn’t work nearly as well as Googling the same thing. 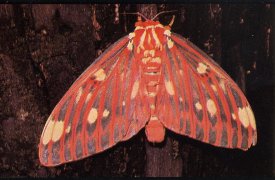 But the county agent, Mr. Robertson, lived two houses down. So we took it to him. He said it was a “pack saddle,” and asked if we’d touched it. (We had taken substantial care not to; do you see that thing?) We said no. He said “good, because it’ll put a welt on your arm the size of a golf ball.”

Looking back, I’m guessing he had a wire or two crossed and had inaccurately accessed a memory of a saddleback: another strange, large caterpillar (though not at all similar in appearance) that is venomous. Turns out the hickory horned devil is completely harmless.

I wish we’d known what it really was, so we could have held it and let it go when we were done looking at it. But alas, Mr. Robertson had told us it was the heinous and venomous pack saddle. So we drowned it in the mayonnaise jar in the garage sink. Hopefully I’ll see one again sometime.

Thanks to the University of Kentucky for the photos.