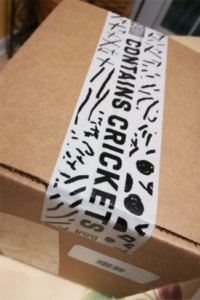 The first thing to know about these EXO Protein whole roasted crickets is that they taste much better than the protein bars. (But that’s a low, uh, bar.) 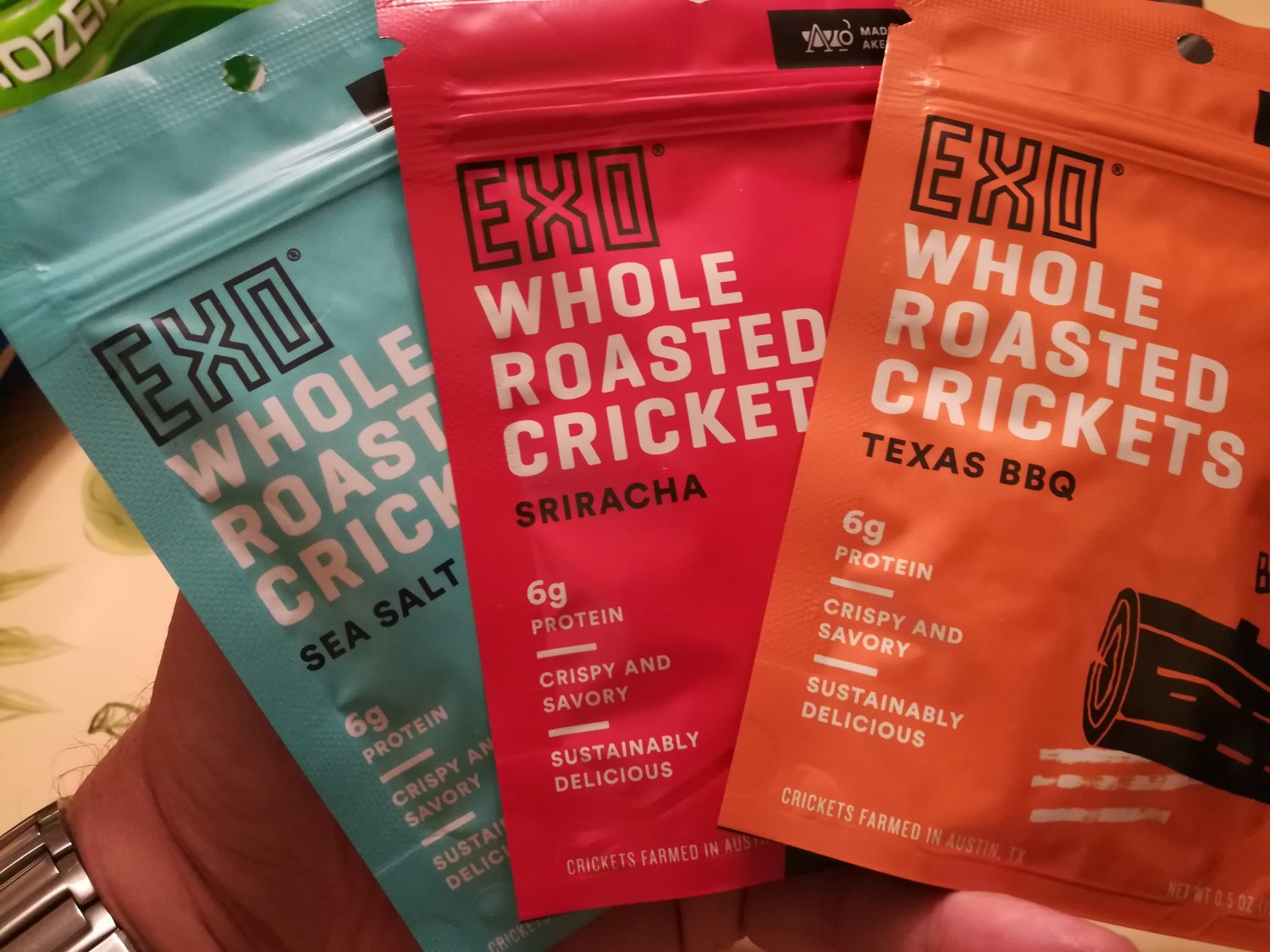 I said in the earlier review that I had no particular hang-up about eating insects, and I don’t. But there’s still a non-negligible creepy factor that I can’t pretend isn’t there. I mean, it’s a bag of dried-out bugs. 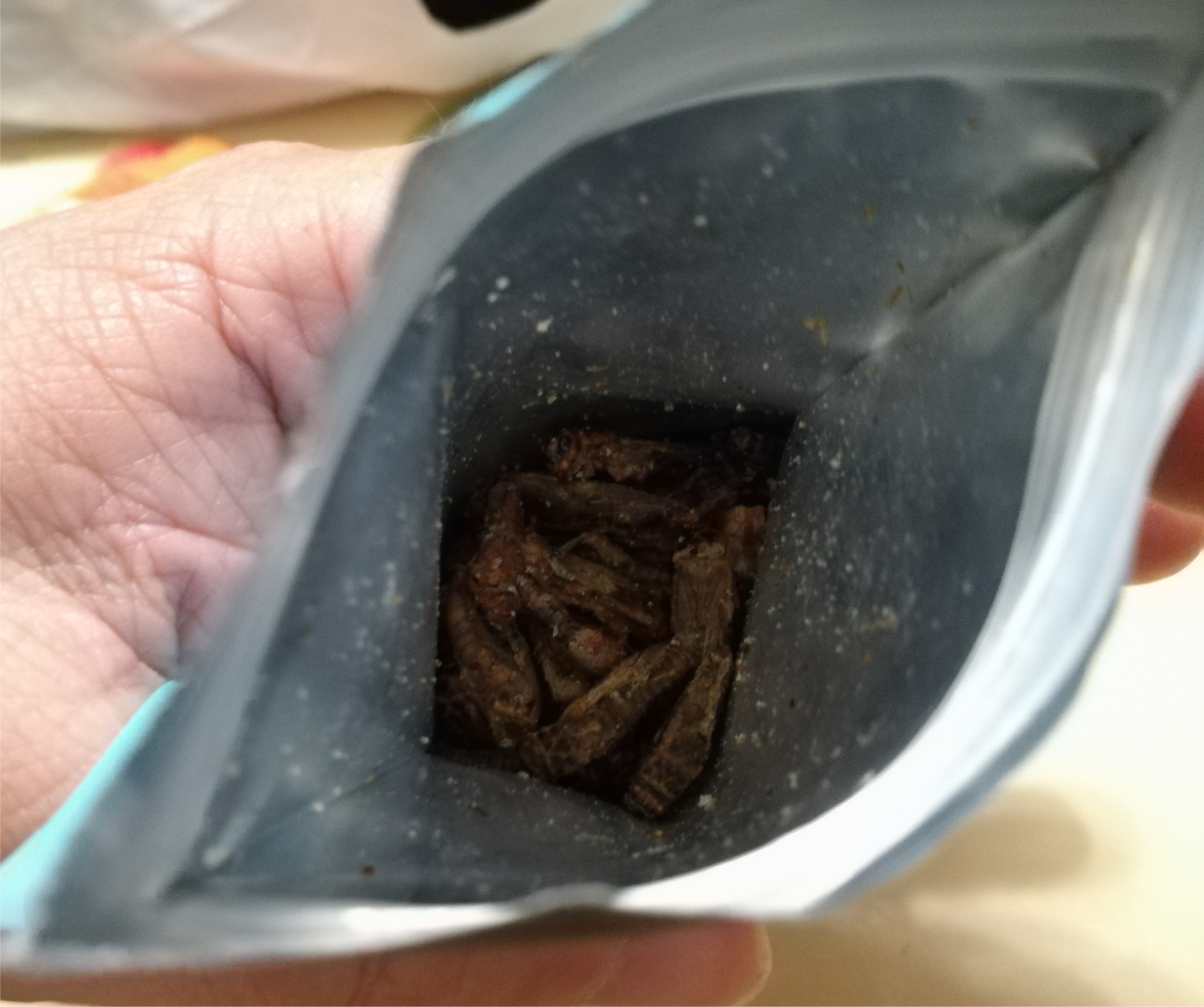 Shake ’em out in your hand, and it looks like you’re about to eat the spoils of a big outdoor light fixture’s annual cleaning, or maybe a badly neglected screened window. 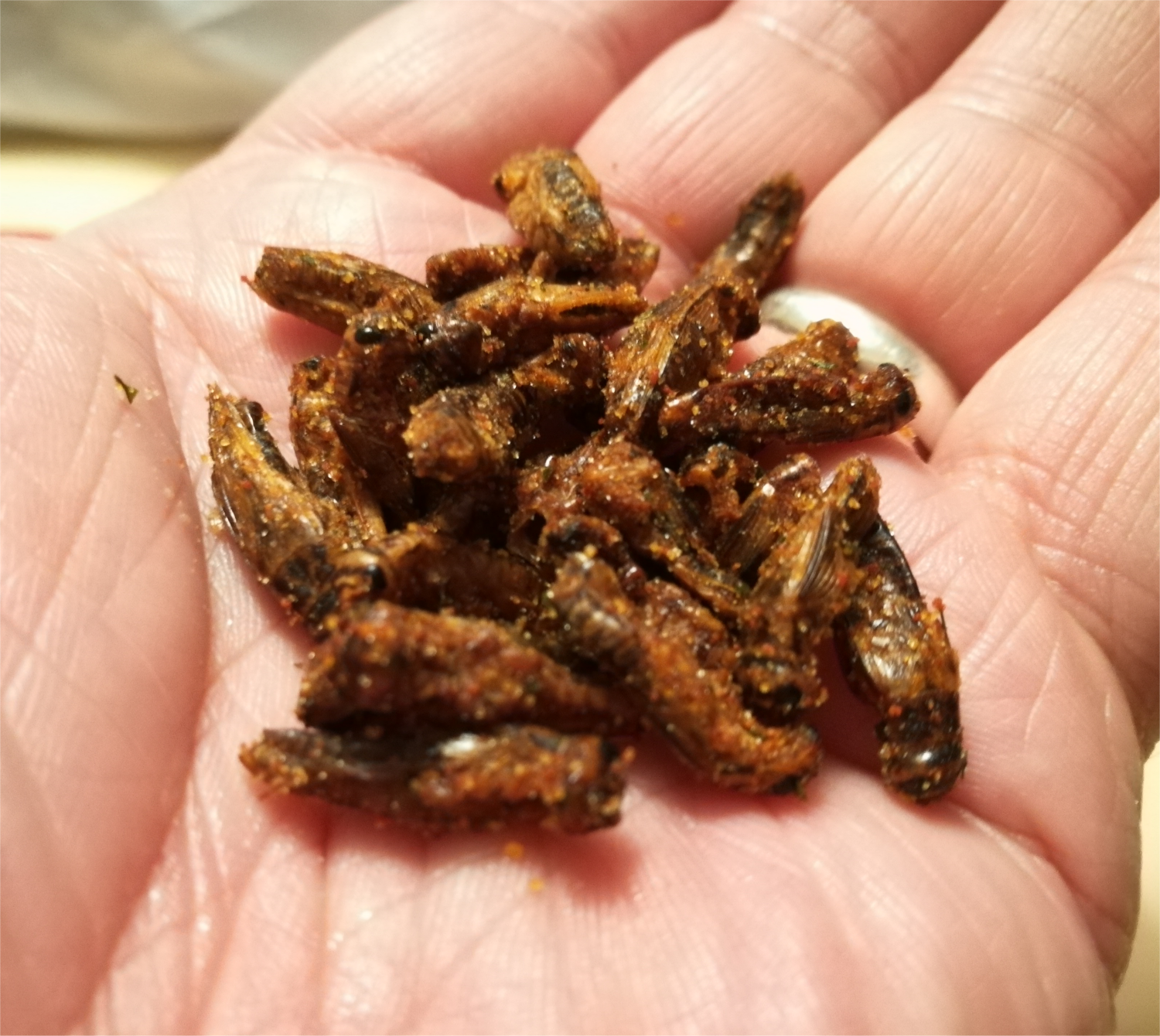 Honestly, not bad. The flavor names generate expectations that turn out to be reasonable. The roasted cricket gustatory vibe itself is kind of nutty. The crunch is a satisfying, snacky one. There’s a slight but noticeable smell, which I’d call innocuous (but it put Aaron off trying them, because he’s familiar with the smell from keeping crickets for his pet gecko). I was the only one in the house who would try these. That’s OK. I’ll eat them all as part of lunches and what-not, which definitely isn’t going to happen with the protein bars.

Apart from the creepy factor/cultural taboos, the big problem with eating crickets right now is cost. This sampler pack was $8 for 4.5 oz. of food, or maybe four times what a comparable snack with a more conventional composition would cost. EXO Protein is candid about this on the site and in correspondence, acknowledging that this must get cheaper to have any chance, and actively working toward it.

So, even if you try them and love them, they’re a little dear to make a sustained habit of. The economic ball is in motion, though!

So these cricket protein bars started showing up in my Facebook feed. Producer EXO Protein presents cricket-based nutrition as an idea whose time has come, and from a resources-in-food-out perspective, it does make a lot of sense.

The cricket used is the house cricket—Acheta domesticus. They’re cleaned, flash-frozen, roasted, and then pulverized into a powder called cricket flour.

Now I don’t have any particular hangup about eating insects. I really don’t see it as all that different from eating shrimp or lobster. However, I know what those taste like, and I know the ways in which they are commonly prepared. I have no comparable experience with crickets.

I got the four-pack sampler—that’s peanut butter and jelly, cocoa nut, blueberry vanilla, and banana bread—to my house for $9.

It seems to me that crickets are a bit down the (otherwise unremarkable) ingredient lists here—there are fruits and nuts ahead of them—but according to the FAQ, there are approximately 40 crickets in each bar.

Aaron and I tried the blueberry vanilla and banana nut flavors last night. Each bar had a crumbly and slightly sticky texture, something like a particularly caky brownie maybe. They smelled more inviting than not.

But they’re certainly not much to look at. 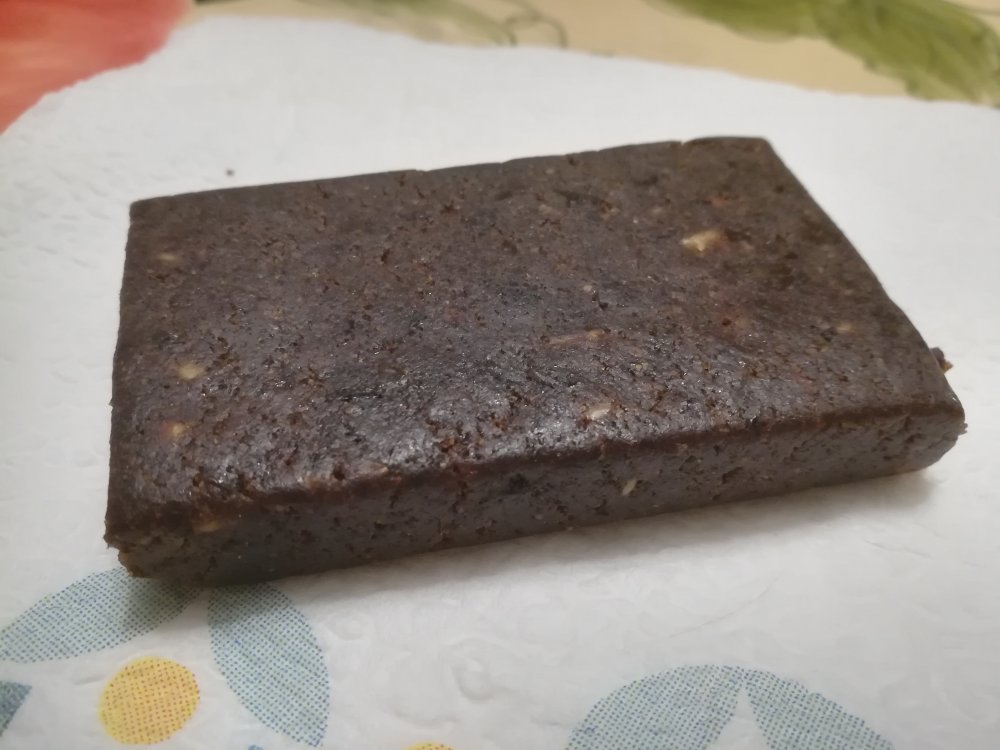 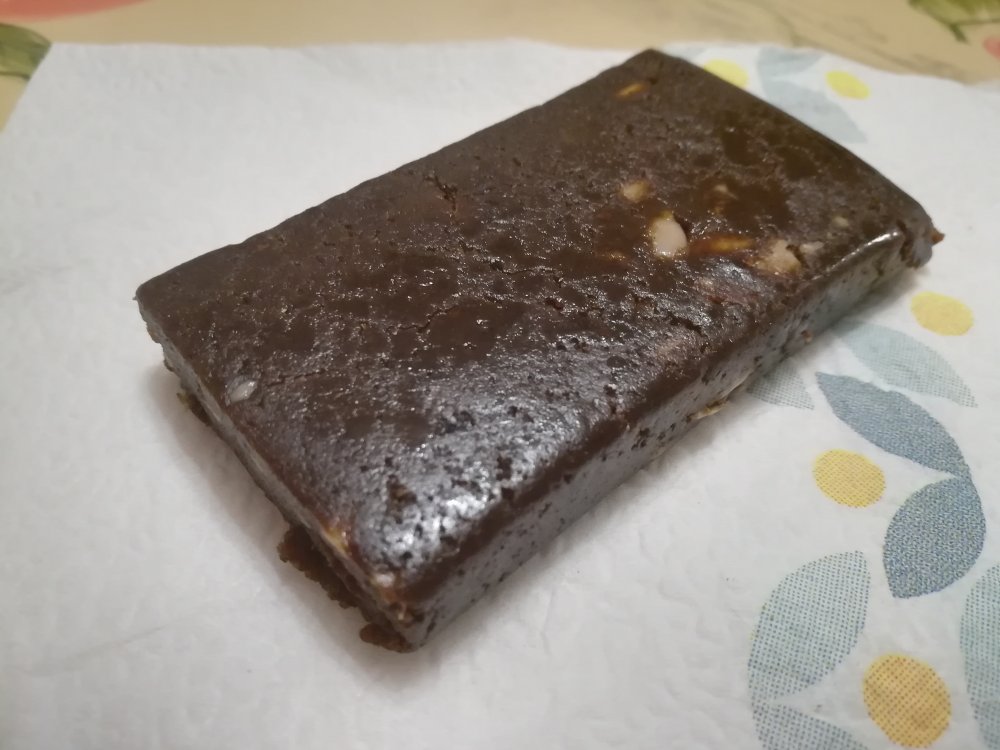 So how do they taste?

Bluntly, we didn’t like them. The texture is appealing enough in the mouth, but the tastes only sort of hint at what the ostensible flavors are. (I couldn’t really say that we “tasted the crickets.”) There’s an unpleasant aftertaste. It’s not an intolerably bad experience, but it’s not one you’d seek to repeat either. Neither of us had a third bite. 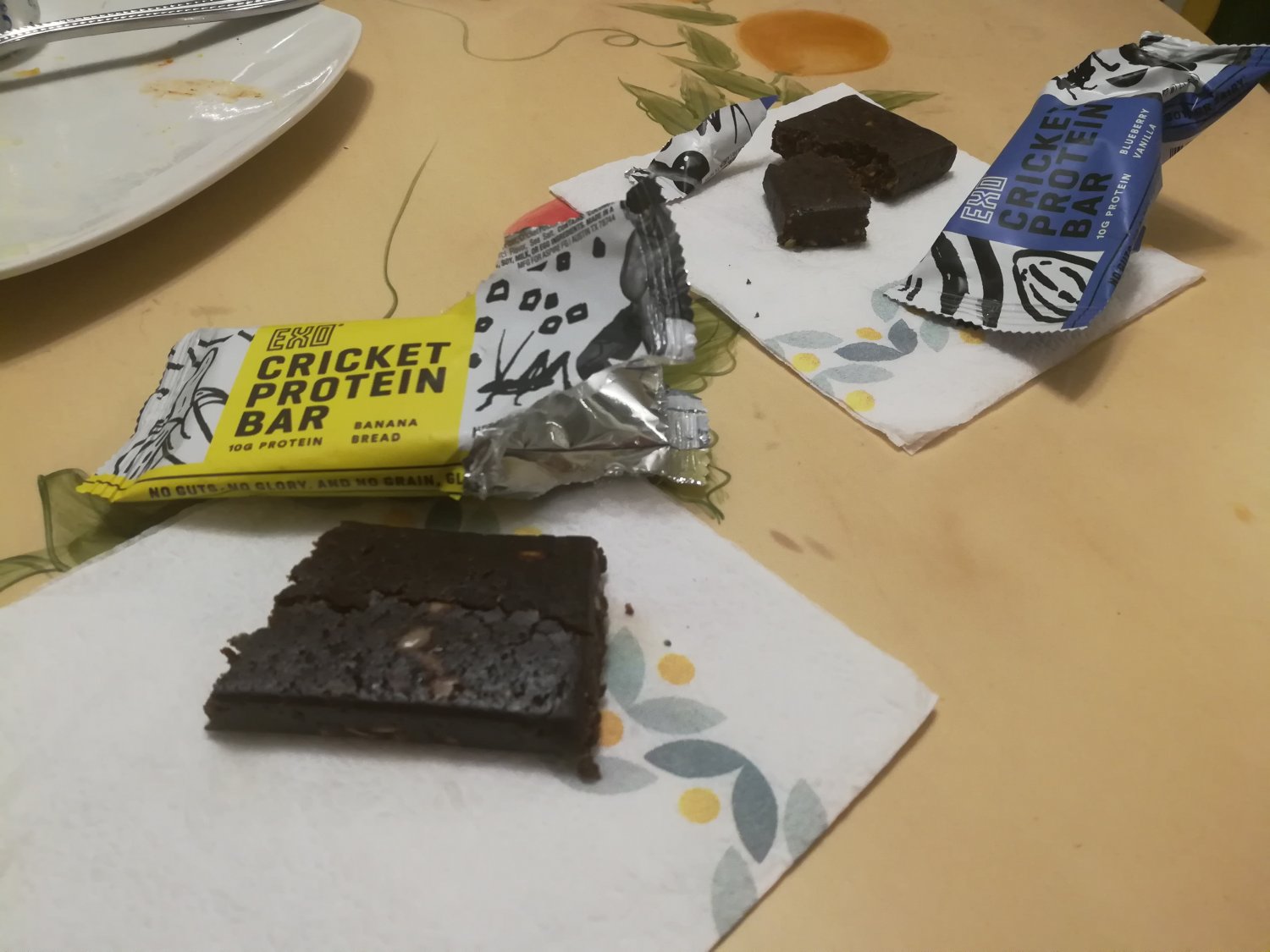 Now I am not an experienced protein bar consumer, so I don’t really have any baseline level of expectation for such a product. For all I know, these are delicious in context. Lea eats protein bars from time to time, so I asked her if she would try a small bite and offer her thoughts.

She got close—she held it to her lips—but then said “nope, I can’t eat this.” (No worries, dear. You got closer than I thought you would.) 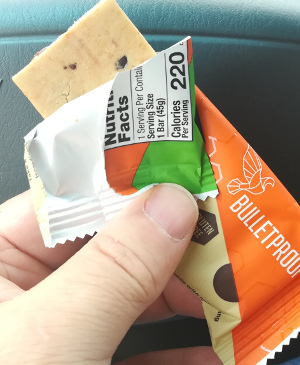 So I purchased a “normal” protein bar for comparison. (It wasn’t a very close specified flavor analog of either EXO bar that I tried, but I didn’t have a large selection.) Guess what? I didn’t love it, but it was significantly tastier than the EXO bars. I ate it all. So, make of that what you will.

I’m not going to formally rate the EXO bars, because even with the late introduction of a control, I don’t have enough experience with protein bars to have an informed opinion. I could have finished an EXO bar, but I didn’t want to. That’s about the best thing I can say about them.

I do think I want to try the seasoned whole roasted crickets sometime soon. Stay tuned.

Just as I moved in more closely for a she’ll-probably-fly-away-but-I’m-gonna-try shot, she decided to pose for me.

A friendly little jumping spider was hanging out at the back door last week. Sometimes they’re on the blind like this, but they really like the space in between the door and the jamb. There are thousands of described jumping spiders with no good, quick way to research one from a photo, so I don’t […]

So we watched the Alabama-Arkansas game from the seventh floor of Gulf Shores Plantation, with the balcony door open to admit the delightful breeze of a 66º fall evening on the Gulf. We also admitted this dragonfly. There’s nothing here to indicate scale, but this is a huge insect. It’s easily 5″ from head to […]