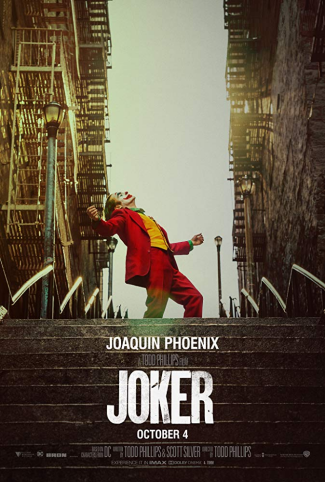 The boys and I saw Joker at Bridge Street yesterday morning. It is another story of the titular Batman villain and how he came to be, set in a well-done Gotham City in which it seems to be about 1984 judging from cars and TV sets, but there isn’t particular rigor for anachronisms. You know how comic book movies are.

That said, this is only marginally a comic book movie. It didn’t have to be a Marvel or DC story to be effective. This is a tale of the beauty and the horror of the human animal. The trappings of the universe are secondary.

There haven’t been many films that have generated as much cautionary rhetoric as this one has. I wasn’t overly concerned about my well-adjusted teenage boys seeing it, but I wondered how over-the-top the violence might be. I thought it might tack borderline parodic—something like Natural Born Killers or Kill Bill.

It is a violent movie, and the depictions are graphic enough that I certainly would not want young children to see it. But at the same time, I think it stops well short of gratuitous. There are no cheap or easy shots. Everything we see advances the plot effectively.

Speaking of the plot, what is it? Well, there is a basic one, but it almost doesn’t matter. This is a character study, not a story. Every bit of exposition serves the transformation of Arthur Fleck into Joker.

That transformation is moving, electrifying, and bar-raising. Just empty your cabinet of superlatives for Joaquin Phoenix’s performance. It’s one of the greatest turns I’ve seen in years. The power and emotion of this portrayal are so effective that I found myself a little teary-eyed. This is not a remotely emulable character, yet you will empathize with him. You will feel sympathy for him.

And that performance, not Joker‘s depictions of violence, is at the heart of what unsettles us. Though they are very different films, Joker is disturbing for the same reason Apocalypse Now is disturbing—it comments so poignantly and accurately on the human condition that we are forced to consider our lots. How did we get to this place? What could we have done better?

Most frighteningly: how much can we change our trajectory, even if we want to? Is there some significant level on which we are simply at the mercy of our natures? I won’t try to answer that question, but I believe this movie asks it repeatedly, from several different directions.

Joaquin Phoenix wins Best Actor for this, or it will be one of the most heinous misses in the Academy’s history.