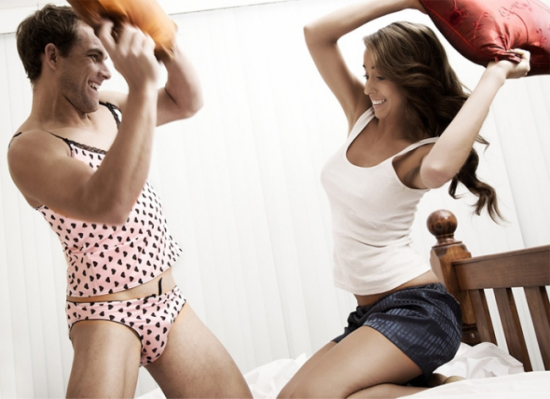 The company stresses the underwear is not “just for gay men,” but I didn’t have that thought anyway.  I suppose there are cross-dressing applications, but don’t most gay guys prefer and wear underwear that is unambiguously designed for men?  (I mean, I confess I’m operating almost completely on pop culture depictions here, but that’s one I’d think Sex and the City would get right.)

No, this is for straight men who get their freak on wearing ladies’ unmentionables.

Now it seems to me there’s a fundamental problem here.  I do not have a fetish for wearing women’s underwear, so cannot speak on the subject with true authority.  But wouldn’t you think the soul of the fetish would be the fact that they’re women’s underwear?  Women’s underwear for men is, by definition, men’s underwear, right?  I would think saying “here, this is for you!” to a man who likes to wear women’s underwear is about as effective as saying the same thing to a teenager about the new “teen center” in the neighborhood.

If I like to wear women’s underwear, and this is underwear for me, then well, where’s the kink?

I doubt this feeds the freak.

Today is the second anniversary of one of the worst tornado outbreaks in recorded history.  In the space of a few horrible minutes here, there, and yonder, large swaths of my favorite state were destroyed, and hundreds of her citizens perished.

Superficially, things look back to normal today.  There’s a tree line near where Browns Ferry Rd. crosses I-65 that’s not going to look right for the rest of my life.  But for the most part, if you want to see tornado damage in northern Alabama two years later, you have to go looking for it.

However, I still have no trouble summoning the chaos and hurt I felt, and my inconvenience was minor indeed.  Please keep those who lost much more in your prayers today and always.  For some, April 27, 2011 will never be all the way over.

Here are links to everything I wrote here at the time:

Scholar’s Bowl was one of my favorite extracurricular activities in high school.  Today, I got to experience it for the first time as a parent.  I don’t think anyone played in elementary school when I was growing up, but they do now.  I took the day off today and watched Nathan’s team sweep the tournament (7-0) and become county champions.  Congratulations, all!

So the basic format is question-answer.  For a toss-up question, the first person to buzz in and answer correctly wins the point for the team.  The team then gets an opportunity to answer a bonus question, which they can discuss for up to 30 seconds before giving an answer. That’s another point, if correct.

That enables a rather severe exploit.  If your team has an 8-point lead and there are 7 toss-up questions left, you can ice it starting at question 14 (in a 20-question game) by simply buzzing in really early on every toss-up.  Say whatever and miss it, giving the other team a chance to answer it.  But without the bonus available, they can score at most 7 more points, so you’re guaranteed a win doing that.

Now that’s not very nice, but the rules permit it, so…?  You know?  We didn’t see it happen today, but I’m curious whether that rule change is present in high school, too.

Aaron asked late last week if we could do something fun together. Talked to Mom, and we decided we’d get Here Comes the Boom and watch it together. (Meh. It’s all right.) Fun family time, though.

So he came back to me Sunday and said “Dad, the movie was good, but it wasn’t really what I had in mind.”

“Yeah? What did you have in mind?”

“Well, I was thinking just you and me could get sushi or something.”

Ah. He meant one-on-one time. I’m glad he came back and gave me another shot at it. He’s a more subtle kid than Nathan. He’s not obfuscatory; just more nuanced about some things.

He asked for sushi and miniature golf, just the two of us. You got it, man. Looking forward to it.

And I’m sorry I missed it the first time. I’ll work on that.