Way back in 1998, I ran into my friend Paul Robichaux on the square in beautiful downtown Athens, Alabama.  This was right around the time that personal digital assistants (PDAs) were going mainstream, and by that I mean you didn’t have to be a tremendous nerd to have one.  (All right, yes, they were still pretty nerdy.)  Almost without exception, even the nicest mobile phones were still just phones. 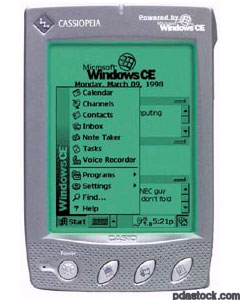 I had purchased and used a clamshell electronic organizer a little bit, but the first honest-to-goodness PDA I owned was the Casio Cassiopeia E-11.  They wanted you to call it a “palmtop PC.”  It ran what was then called Windows CE, with mini-versions of Word, Excel, and so forth.

Paul had a PalmOS PDA.  About my Casio, he said “I like the built-in capabilities, but I think cascading menus are a horrible UI convention to try to bring to a three-and-a-half-inch screen.”

And so they were.  I used it for most of a year before dumping it on eBay and getting a Handspring Visor Deluxe, and was amazed at how much more readily the Palm operating system plugged into my life.  It was so intuitive, it almost felt anticipatory.  Stayed with it until I got my first smartphone.  In fact, I carried my Palm TX everywhere as recently as two years ago.

I have that “plugged into my life” feeling with my current phone.  I have a few nits to pick with the Windows Phone operating system, but it is really good at enabling what I want to do with minimal fuss.  Microsoft has done an excellent job with this mobile operating system.

I think the biggest factor is simply that Microsoft is so late to the game.  Both iOS and Android are familiar and work well, so there is little incentive for folks to change horses when it’s time to re-up.  It takes a technophile, a contrarian, or both to even give Windows Phone a shot. 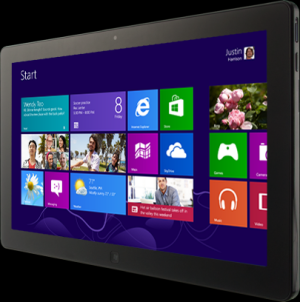 I think there are other things going on here too, though.  I think Microsoft has made a couple of major mistakes rolling out its current Windows ecosystem.

For one thing, the Surface tablet came to market with a price that was much too high.  Many analysts suggested before its release that a highly aggressive price in the $200-250 range would be important to increase adoption rates.  Instead, it languishes at twice that.  With a keyboard cover, you can knock on $630.  That’s absurd for a device that needs so badly to make friends.

For another, I think Microsoft is guilty of the opposite UI paradigm problem I described at the beginning of this post.  The live tile motif is fabulous for a truly portable device.  But I think Microsoft has badly underestimated how conservative users are about their primary computing devices, whether they be desktops or full-boat bagged laptops.  Hmmm.  These tiles look great on my phone and on that tablet, but do I really want them on a 24″ screen?  To what end?  What are they doing for me?  What was wrong with my taskbar and Start menu?

I’m sure Microsoft has excellent, well-researched answers, but I also suspect they are scientific responses to what are essentially religious questions.  It’s just too much change at once, and the benefits aren’t obvious.  I know what the point of the paradigm is, and I still think it’s a little chintzy on my “real” machine.  Furthermore, I think they’re guilty of trying to dictate the moment when users don’t think of mobile and non-mobile, but just of computing.  I remain unconvinced that moment is inevitable.  But if/when it happens, I doubt it will have been particularly responsive to actions as deliberate as Microsoft’s attempted forced convergence.

Windows 8 is in serious trouble.  I think there are probably only ugly ways out on the full-strength computing side, a limp-along until the next Windows undoes the damage perhaps being the least so.  I think Microsoft still has a chance in the mobile world, but they need a different plan, and right now.  Get very aggressive with pricing, perhaps coupled with a little frankness and humor in advertising?

Microsoft, do you appreciate that you need hearts, not just minds?

2 Responses to “Windows 8 not yet terminal, but definitely has a fever”