I have reservations about Mitt Romney because he’s demonstrably supportive of government-run medicine.  It’s also relatively easy to establish that his positions have been rather more fluid than those steady tracking movements likely to be informed by increasing wisdom.  (That is such a horrible sentence, but I got in the middle and couldn’t stop.  Forgive me.)  Finally, I don’t necessarily think it’s a good thing that he is so “electable.”  This, so far, seems to translate as “utterly without passion.”  You don’t have to go all the way to velvet robes, goblet of wine, and turkey leg to have a little spunk about you.

I am not bothered in the least that Mitt Romney is a Mormon. 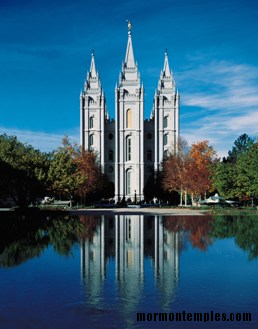 You know, Mormonism is a cult.  Such is a claim with quite a lot of traction in Southern Baptist churches, anyway.  I got that at least twice that I can remember during my adolescence in such a church (which, despite its shortcomings, was more good than bad for me).  I’ve had two people express that concern to me about Mitt Romney.  One is still gaga for our dear Barack, so her vote isn’t in play anyway.  However, she wondered about what kind of effect that might have with Southern religious voters, to which my response was a hearty “none.”  Think about it:  wouldn’t folks who think Romney’s in a cult be the same folks who think Obama’s a stealth Muslim?

So where are they going to go anyway?

And to anyone who’s genuinely, first and foremost put off by Romney being a Mormon:  seriously?  Can you really find anything in that narrative that’s any more objectively ridiculous than any other major religion?  Now I know it’s trendy and probably metrosexual or something to be a jackass loudmouth atheist.  But good luck finding a major presidential candidate without a Judeo-Christian profession.

So within that framework, you’re going to excoriate a guy because there’s a bit more to the story of his faith than that of a “normal” Christian?

The day of the Florida primary has arrived.  I guess there might be 20 minutes tonight between the last poll closing and the call for Romney.

A couple of Rush’s callers yesterday were stoking the narrative that the damned liberals were hijacking the polling and that Newt still had a great chance today.  Rush didn’t stoke with them, but he didn’t throw cold water on the idea either.  We’ll know soon.

I stuck a NEWT 2012 sticker to the Technical Writing Express yesterday.  Might as well.  It’s difficult for me to see from whence it would come, but I’m trying to remain hopeful that February will bring some excitement to this race. 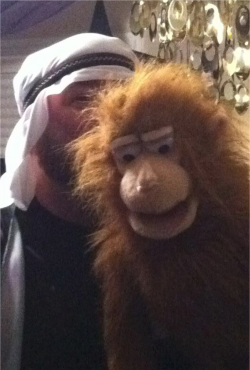 I was whisked away to Arabia last night.  Beth hosted a murder mystery dinner party set in a market in the kingdom of Ardalan.  I was an entertainer named Nihad, with a pet monkey named Sinbad.  (Terri snapped this photo.  I suspect others shall surface.)

Have you ever attended a murder party?  I can access a vague memory of playing a drug dealer with slicked-back hair for one of these with an old girlfriend, but that’s been 20 years ago now.  Further, I’m confident the scope of this one dwarfed the other, both in the game’s design and Beth’s quest for total environmental immersion when decorating for something of this nature.  (Wow, what an effort, too!)

I’m really a pretty smart fellow, but to play this game well requires a degree of mental plate-spinning of which I’m apparently incapable.  It’s necessary to keep up with three or four times the amount of information than I can manage.  This manifests as a) one character asks me about trading information or items; b) I put him off so I can flip through my packet and see what he’s talking about; c) I figure out I need to do what he said; d) I go back to him and say let’s do it; and finally e) he’s already gone a different way.  This happened to me at least twice.  (I had most of what I needed to know well in advance, but the pacing and the amount of simultaneous interaction buried me.)

It concerned me enough that I pulled Beth aside and told her I was worried my ineptitude was messing the game up, but she assured me there was enough flexibility designed in to accommodate such.  (You know, I can also generate some guilt thinking about the fact that she gave me an extroverted character that I never really did enough with because I was having to try too hard to keep up!)  She’ll swat that down too, because she’s gracious and she’s my friend.  Then she’ll say that she just hopes I had a good time, which I certainly did.  It was food, drink, and lots of laughs with folks I enjoy very much.

If we do it again, though, I think I should probably tend bar.

Thanks so much for all of the trouble and the invitation, Beth.  It was a blast!

Our longtime friend Alex is an architect.  As systematic as he is, he may be better suited to his occupation than anyone else we know.

So six or seven years ago, we were visiting over a beer, and he was telling me about his Saturday morning.  He had a backyard construction project going, and he told me “so yeah, I thought I’d try it this way, and if it didn’t work out I’d just Undo it and try it another way…”

See what happened there?  He spends his days mostly in software, where a mouse click or two wipes away a mistake.  That mindset momentarily invaded his real world convincingly enough to plant an absurd thought.

I’d remembered that as an interesting anecdote and nothing more until today, when I realized technology had similarly compromised my thinking.  I was listening to talk radio at lunch and wanted to hear something said, but hadn’t been listening closely enough.  My immediate thought was “well, I’ll rewind it and…”

My DVR, and probably to some degree online video, have apparently wrecked my attention span.  My default level of attention is now less than it ever has been, because I’ve been conditioned to believe that I can simply rewind if I want to truly listen to something.

You know, everybody worries about nuclear holocaust or environmental calamity as the cause of humanity’s potential extinction during its ontological adolescence.

What if it’s just that we’re eventually going to be unable to listen for thirty damned seconds in a row?