I write and eat right-handed.  I throw left-handed.  I kick left-footed.  This is known as mixed-handedness, or cross-dominance.

Now please note that ambidexterity—considerable fine motor skill with either side—is a rare form of cross-dominance, but it’s not what I’m talking about.  I mean I write with my right and can’t with my left.  I can’t tell you how many times I’ve said to someone “I write and eat right-handed, but I throw left-handed” and the person has replied “Oh, you’re ambidextrous!”  Uh, no.

(Before we leave ambidexterity, speaking of it—and tremendous mental capacity, I’m sure—did you know that President Garfield could write Latin with one hand and ancient Greek with the other simultaneously?)

Okay, then.  I discovered today that I have a colleague who is also mixed-handed (exactly opposite from me, though).  That I can recall, she’s the only other person I’ve ever known who is mixed-handed.

So then that got me to wondering how rare it is.  Turns out it’s uncommon, but not particularly hard to encounter.  There are millions of us.  Know who else was mixed-handed, though?  Check out this list:

I suddenly believe that I have, to date, massively underachieved.

The Restoring Honor rally, headlined by Glenn Beck, was held at the steps of the Lincoln Memorial on Saturday.  The most pessimistic, and ridiculed, attendance estimate comes from CBS, who said 87,000.  Most other estimates are considerably higher.

In any case, a bunch of folks, dig?

Now there is much to be said about the rally’s content, and it will surprise no regular reader of this blog that I find a lot of agreement with this crowd.  I have never been more concerned for my country, and I’m thoroughly confident Mr. Beck, Mrs. Palin, and their supporters have a lot more of the answers that will genuinely restore America’s greatness than do Mr. Obama and his supporters.

So there’s a post in that, for sure.  However, I’m not going to write it.  Tens of thousands of bloggers already have, and as I mentioned above, there is no shortage on WmWms of what I think about the current state of things.

Many have also posted about the level of trash left by the Restoring Honor attendees, and I am going to join that chorus, because it ties in with something I discussed previously.  Have a look at the Mall, post-rally:

Wow, what a bunch of careless swine!  Can you believe that enormous mess they left?  But what else would you expect from that slack-jawed drooling bunch of hicks who pray to invisible men in the sky and hate black people, right?

I really enjoyed this little data point, because it reminded me of when I posted about how surprised “everyone” seemed at how well-behaved the Obama inauguration crowd was.  Didn’t surprise me at all.  By and large, the folks who would cause a scene with base or boorish behavior were happy.  It’s no more complicated than that.  As then, so now.

Now I’m certainly not saying to my liberal friends that, solely by virtue of their politics, they’re disruptive slobs.  I am, however, asserting that a disruptive slob in such an environment is likely to be liberal.

Oh, and I’ll throw a link back to this post in for good measure, in case there’s any nonsense about “poisonous rhetoric” or similar.

How long until November 2?  Here we come.  Boo! 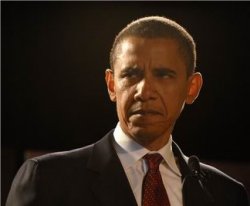 Everyone remembers Barack Obama railing against the “bitter” who “cling to guns or religion.”  But the “antipathy toward people who aren’t like them” was also part of that gem, and in my view it’s shaping up to be a presidency-defining quote.  Charles Krauthammer wrote a great column on that forgotten part of it yesterday.

His thrust is that whenever this administration loses an issue in the court of public opinion—you know, like just about anything it ever supports?—it inevitably shrieks bigotry.

You see, the Tea Party movement can’t possibly be genuinely concerned about the administration’s economic policies.  No, they don’t like that Obama is black.  Supporters of the Arizona immigration law are not concerned about national security; they’re xenophobic.  Prop 8 supporters?  Raging homophobes, every one.  The Ground Zero mosque cannot be opposed on a basis of anything other than religious persecution.

If you’re throwing from left to right, you might as well toss a charge of bigotry at your opponent.  There’s rarely any significant penalty for it, and if the perception sticks, then you don’t have to argue substance anymore.  Well, hell, he’s a racist.  Who you gonna believe, me or a racist?

I’m really angry.  I thought I’d been politically angry before, but it’s shaken out kind of like the first time I thought I had my heart broken.  I described that as a sad time, and then I really got my heart broken a few years later.  Put the faux “first time” in perspective.  Turned out I’d just had my feelings hurt a little bit.

As with that, so with this.  Oh, my goodness, what I wouldn’t give to merely be “angry” at Bill Clinton’s boorishness again!

But no, turns out I really get angry when it becomes conventional wisdom (or all too close to it) that the articulation of a political position I hold, whether I or someone else does it, is really just code for the bigotry polluting my foul soul.  Doesn’t matter how often I say that Barack Obama could be white, red, or purple, and I’d feel exactly the same way about him.  See, now that’s exactly what a racist would say, isn’t it?

The Democrats are going to get beaten badly in November. Not just because the economy is ailing. And not just because Obama overread his mandate in governing too far left. But because a comeuppance is due the arrogant elites whose undisguised contempt for the great unwashed prevents them from conceding a modicum of serious thought to those who dare oppose them. – Charles Krauthammer

Thanks to my always-thoughtful brother-in-law Russ, my sister Jenny and her friend Sarah are enjoying Kiss in Virginia Beach as I type.  I’ve been getting from-the-show text updates on ridiculous stage banter, effects, and what-not.

In their honor, here’s a recent pass at my favorite Kiss song.  The handheld video is a bit shaky, but the audio sounds like it’s from the board: