I’ve been in a major Sass Jordan mode for the past several days.

It’s kind of bittersweet, because I think part of it is that I’m making peace with the fact that musically, she’s pretty far down a road now that I don’t much care about.  (Not that being a Sass Jordan fan in Alabama isn’t lonely enough.)

I blogged favorably about Get What You Give, and I still enjoy it some, but it hasn’t burned in with me long-term like her earlier stuff has.  From Dusk ‘Til Dawn, which came out late last year, feels like a continuation of that record to me.  It’s a James Taylorish place that, when I listen to it, constantly reminds me that it isn’t what she used to do.

For me, the four-album run from 1988’s Tell Somebody through 1998’s Present is the heart of her excellence.  It’s power pop, then roots rock, then pissed-off roots rock with a splash of grunge, and finally a mellower turn, but still with enough guts to reverberate.

I found this killer “Make You a Believer” on YouTube this afternoon.  This is the first track on 1992’s Racine, performed at a Toronto festival in 2003, with the inimitable Jeff Healey (RIP) absolutely wailing on a solo.  Enjoy. 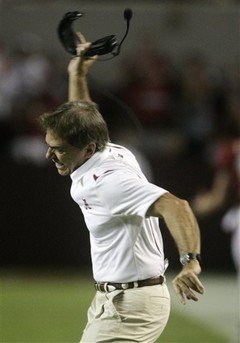 Apparently Mal Moore has jumped all over the need for a Nick Saban statue on the Walk of Champions.  It’s in progress now.  It could be ready as soon as A-Day.

I’m not so sure about the photograph after which they’ve chosen to model the statue, though.

Roll Tide to you, my friends.  Apparently we may drop as far as third or fourth in the recruiting class rankings this year.  Try to keep your chin up.  I’m sure we can stay above .500 this fall.  Heh.

(Pause for a moment with me.  Do you feel that?  Do you ever just stop, and drink it in, and enjoy being all the way back?  I sure do!)

The cold rain (as currently forecast) has initiated cancellation of both boys’ basketball games tomorrow morning.  So far, I’m still on for a three-hour volunteer stint at our church’s breakfast and lunch counter tomorrow afternoon.  They’re saying it might get treacherous tomorrow, but hell, they said that about tonight.  I guess we’ll see.

You don’t have to go far north of here at all to get into genuine winter nastiness.  We’re being just spared.  You know, given that it’s on a weekend, I don’t much mind.  It almost doesn’t count for me if it’s not disrupting the workweek.  Heh.