BamaDan and I boarded the Technical Writing Express at 1:20 yesterday afternoon and set out for Chickenfoot at the Tabernacle in Atlanta.  After bisoning ourselves up, we settled into our seats with about 15 minutes to spare.

Opening act Davy Knowles started promptly at 7:30, and played a 30-minute set of competent blues/arena rock, with a bit of an Allmanish, the-jam-never-ends vibe.

Chickenfoot took the stage at 8:40:

There was a piece of “Immigrant Song” hanging off either “Get It Up” or “Turnin’ Left,” as well. 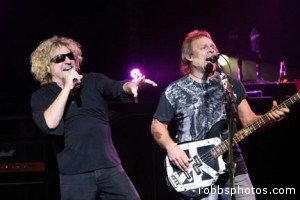 I was complimentary of the album, so I’m going to be pleased with a set list in which I get to hear almost all of it, including all of my favorites.  As you’d expect from a band with résumés this storied, they played excellently.  The precision was impressive.

Joe Satriani is really something else.  He’s a lick machine, of course, but would there be a difference making it happen in the studio and pulling it off in front of 2600 people?  It would seem not.  That guy went and made his stuff exactly like he wanted it on the record, and then coolly dispatched it on stage last night.  I loved how well he preserved the subtleties in the “Down the Drain” and “Future Is the Past” intros. 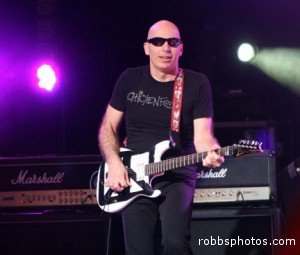 Thing” and “Turnin’ Left” live, and he didn’t disappoint.  He’s like this band’s secret weapon, almost—they’ve written a lot of songs on which he can really show off.  He and Chad Smith made a formidable rhythm section.

Sammy was Sammy.  I’ve seen him several times, and he’s one of the most fun, engaging, and talented frontmen in the business.  He had it appropriately dialed back just a click to suit the environment—this wasn’t a Wabos show, after all—but he’s a guy who clearly loves being who he is.  He even strapped up for “Bad Motor Scooter”!

Speaking of, that was really my only wish.  There was so much musical history on stage, and “Bad Motor Scooter” was a cool stroke, but it was the only stroke in that direction.  Seems to me there’d be plenty of set list room for just a little from each guy’s background.  Oh well. 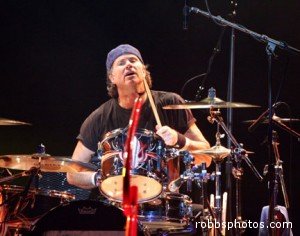 There were pro camera crews all over the place, as well as an automated rig on a 30-foot boom.  So who knows?  Maybe we’ll end up on a DVD.

I had said a couple of rather complimentary things about the venue to Dan, having remembered a near-luxurious Tabernacle experience seeing Paul Stanley three years ago.  Well, I believe they’ve installed new seating aimed at getting a piddly ‘nother hundred people or so in the place.  It was disappointing.  The seating was cramped, and the air conditioning couldn’t keep up.  I may have taken my last trip to the Tabernacle.  When it’s 485 miles going and coming, it’s particularly tough to take not being comfortable at the show.

And in and amongst our section: 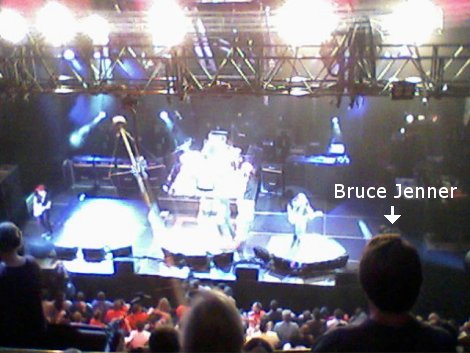 It was a fun outing, with a healthy slab of rock ‘n’ roll flanked by a side of film conversation, and a little sprig of sociology.

Finally, I’m glad to be off today.  The spirit remains willing for silly late nights out, but man, it sure does hurt longer than it used to.

For two Saturday mornings now, we’ve enjoyed the company of some remarkably friendly butterflies at Nathan’s soccer games.  Locals:  we encounter these in the east central part of Palmer Park, on the field colloquially known as “lower lower north.” 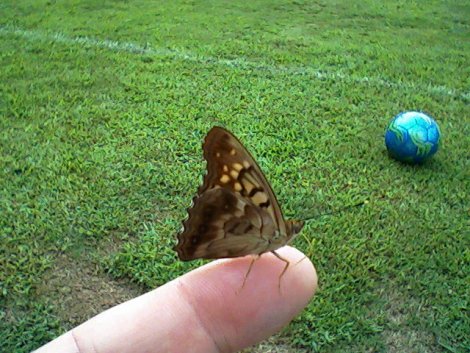 These aren’t fleeting, lucky shots.  These butterflies land on you as soon as you sit down and hang around as long as you let them, pretty much.  There are never very many of them; there seem to be four or five around at one time.

These are cell phone shots.  I’m taking my SLR next time. 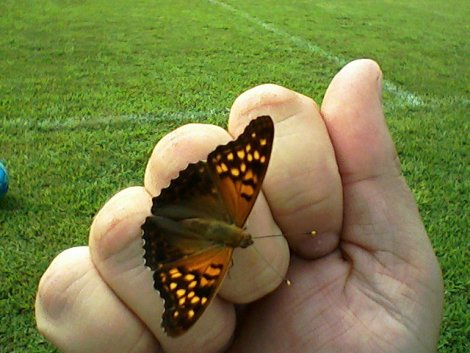 I poked around for more than a few minutes looking for positive identification, and never came up with anything solid.  Best I can tell, it looks like it might be a species of Painted Lady.  Is there a lepidopterist in the house? 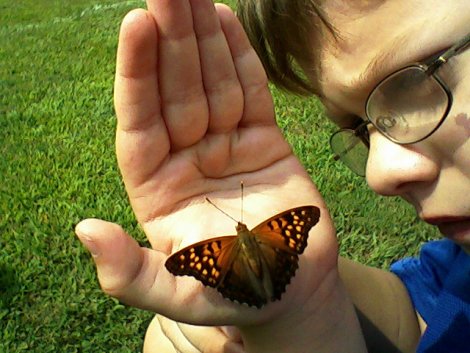 Hope you’re having a good weekend.

How about this one:  Let’s turn Heathers into the next Buffy.

Dear young, hipster Fox television professionals who are currently shepherding this concept:  I’m sure you’re very talented, but this is really a rotten idea.  Heathers was and is genius, and it deserves to be undisturbed.

And has it not occurred to you folks that a primary plot-advancing device in the film was murder?  Going to be tough to keep a cast, isn’t it?  Or are you going to just have Veronica and J.D. get into standard sitcom hijinks and capers instead?

Heathers burned fast, hot, and out.  Please don’t try to relight it.

It’s a good idea, Mark.  Go home and never come back.  Perhaps if you contritely and completely surrender to your wife’s mercy, y’all can put it back together.  You remember your marriage, right?  That little greatest-earthly-promise-you’ll-make thing?  Okay.

We Americans stay hungry for political destruction, particularly of the sort driven by penile gratification.  However, we don’t often see a fall so slow and agonizing.  Perhaps it was the fact that he couldn’t shut up about how incredible his mistress is that prolonged it.  Or maybe it was when he said he would “try to fall back in love” with his wife.

Hey, maybe he’ll steal a page from the (alleged) John Edwards playbook next:  reveal he has a child with her, and move her into the neighborhood!

Actually, Sanford seems defiant, which would be 100% consistent with his to-date stupidity on the whole thing.  He may well end up impeached on misuse of travel funds.