There seem to me to be some interesting, and potentially sickening, questions about the behavior of heavily armed agents in the president’s motorcade in Bristol, Virginia two days ago.

I had a longer post up on this, but I think I’ll just point you to Breda’s instead. 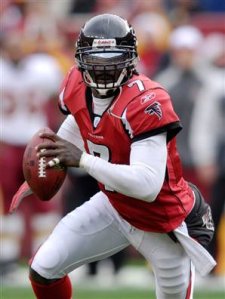 Michael Vick was conditionally reinstated to the NFL today.  Essentially, if there is a team that will sign him (of course there is), he is eligible for all team activities except actual games, and he could potentially play in those as early as October.

And I think he could have killed a man and generated less outrage.

I never much liked him, always having found him a thuggish product of a thuggish Virginia Tech football program.  He had his share of trouble before he bankrolled the systematic and ongoing abuse and death of dogs, you know.

But, dig:  he was convicted and has served his sentence.  Heinous as his crime was, what is it about it that makes it (apparently) unforgivable?

He happens to be a professional football player.  On what legal basis should he be prevented from earning a living?

I’m pulling for him, at least partially because I’m entertained by the hysterically excessive reactions of his detractors.  Let’s put his balls through a meat grinder.  He needs to be attacked by dogs to get him straighten up! [sic]  Michael Vick should be killed. You know, something tells me that if we watch these same quarters for outrage when prominent people commit heinous crimes against human beings, we’ll find none.

What is that about?