I like hot sauces quite a lot.  They’re a great way to add healthy excitement to food.  In that interest, I decided to have my grilled chicken breast marinated in Tabasco Habanero Sauce tonight.  (I had a little on hand.)  Heh.  It’s the hottest of the Tabasco sauces. 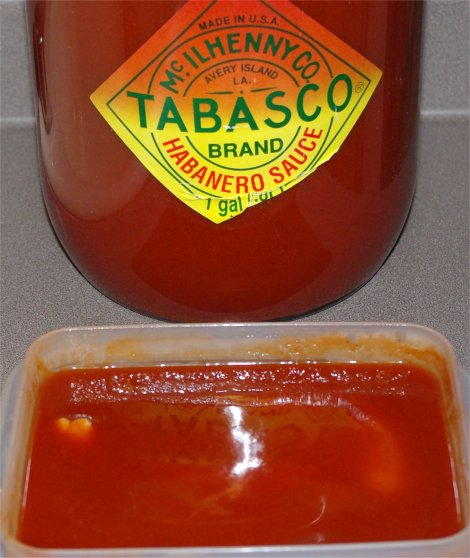 Don’t let the name intimidate you.  Tabasco Habanero is a splendid little sauce, its heat carried in a spicy fruitiness.  It’s my favorite mass-market sauce, and my standard go-to when I’m not in the mood for a blow-the-back-of-my-head-out boutique product.  It’s somewhere between 7000 and 8000 Scoville units, so it’ll ring your bell about like a jalapeño will, or maybe a bit more.

(That’s Lea’s and the boys’ on the left in Dale’s, and mine on the right.)

The hot-sauce-as-marinade experiment was largely successful.  It is sweet enough that it caramelized a bit, and it adhered to the chicken well.  The tangier aspects of the sauce were enhanced, and the heat took on a cumulative quality that I’ve not noticed when shaking the sauce on food.  I broke a bit of a sweat near the end. 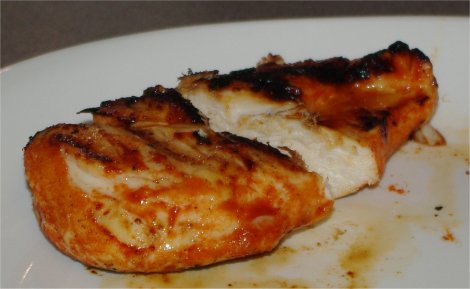 I did make a mistake in letting it marinate too long.  It was in for about three hours, which was long enough to “cook” it a bit and make it drier than it should have been.  However, that’s easily corrected next time out.

Finally, I can’t finish such a post without mentioning fellow blogger and net acquaintance Scott Roberts.  Scott’s blog is a nationally-known and entertaining resource for spicy food reviews.  If you like hot sauces, go spend an hour or two catching up on all you’ve missed, and then bookmark him.

Barack Obama recently nominated Sonia Sotomayor, who has a vagina and was born to poor Puerto Rican immigrants, to the Supreme Court.

The coverage of and conversation about her nomination is full of two thoroughly obnoxious language errors.  (One is from her own mouth, so that’s understandable.)  Dig:

Well, now.  Look what the Obama regime quietly floated yesterday while we all spun our wheels on Sotomayor and GM’s imminent bankruptcy.

Ladies and gentlemen, please, for the love of all that is holy:  start the avalanche of faxes, letters, and phone calls to your representatives right now.  A value-added tax must not be allowed to roost in the United States.  It is pernicious and forever (hence the title of this post).

A national retail sales tax might not be a bad idea, but it must come only with the abolition of the income tax, which would mean the repeal of the Sixteenth Amendment.

(Naturally the VAT discussion includes no such provision, and I suspect it’s comical to hope for any prospect of such.)  Actually, you know, come to think of it, I’m sure it won’t happen.  Why, Obama said only the rich would see their taxes go up, right?

Folks, enough.  Let this be when you finally get sufficiently pissed off to raise hell.

Or maybe these are really far away: 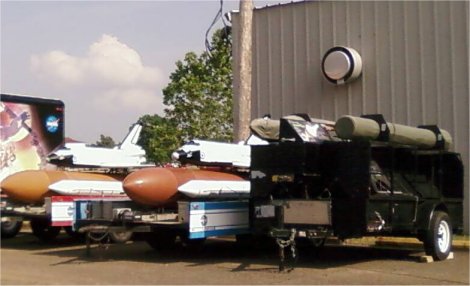