I saw something cool today—the second-biggest airplane in the world in flight. I was treated to the sight of a Lockheed C-5 shortly after takeoff. (An ex-Air Force guy identified it for me. All I knew is that it was waaaaaaay bigger than a C-130.) I watched it make a lazy turn to the north and gradually vanish. 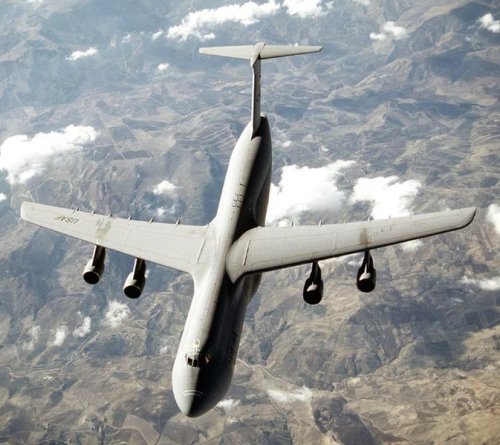 Wikipedia tells me that the airplane I saw today weighed at least 400,000 pounds, and had a wingspan just short of three-quarters of a football field. It’s so freakishly huge it doesn’t look real in the sky.

I’m fair at estimating distance along the ground, but I’ve never been worth a damn at estimating altitude (and the unusually large size of the aircraft messed with my perspective further). That said, I don’t think it could have been any higher than 2,000 feet when I saw it. When it turned just so and hit us with the noise full force, it was absolutely unbelievable. You could have screamed at the top of your lungs standing right in front of me, and I wouldn’t have been able to hear it. I swear my sternum was resonating.

It was one of those increasingly rare moments during which I felt like a kid again at the pure wonder I experienced. “Look what we can do!” I thought, giddily and unreservedly.

I deeply hope we can find our way past our technological adolescence without exterminating the human race.

Because that would suck.

I can’t say I’ve never been a slob, because small children are universally and thoroughly disgusting, and I used to be a small child.

But I’ve been fastidiously neat since about 1975. I was never the kid whose parents rode his ass all the time about keeping his room clean. I always knew where my coat was.

As a teenager, my music was always alphabetized by artist, and further organized by order of release. My class notebooks were color-coded. (History was yellow, English was blue, science was green, and math was red.) As an adult, the living room to my apartment always looked exactly the same when I came home from work, because I had put everything back in its place. You want to know what kind of mileage I got for a tank of gas two years ago? No problem; let me check my log. My first PDA magnified and dramatically enabled my tendencies. (I’d give up my cell phone before I’d give up my PDA.) You get the idea.

More than one person has half-kiddingly commented that I might have OCD. You know what? I just might. But it’s never affected my ability to lead a fruitful and productive life, so I’m not interested in a professional opinion on the subject. Just put “Died With Undiagnosed OCD” on my headstone. (Except I’m not going to have a headstone.)

Anyway, when Lea was pregnant with Nathan, several of my slobbier friends (you know who you are) delighted in informing me that I was going to have to relax my neatness standards a lot. “All kids are slobs,” they’d say, chuckling and doing a poor job of concealing their enjoyment. They were right. I knew they were right.

I’m putting up with a much messier living room and kitchen as a matter of course. It has nothing to do with Lea’s housekeeping skills, apathy on either of our parts, or anything of the sort. It has to do with the fact that young children are walking, talking entropy bombs. Most of the time, if no personal injury or property damage is occurring, then I’m good. (Sometimes I’m even all right with the latter, as long as it’s reversible. I don’t intend to systematically patch the drywall until 2010 at the very earliest.)

So far, almost six years into parenthood, my organizational appetites have been effectively sated by what I like to call “pockets of order.” I can’t do much about the living room floor consistently, but I’ve got the top of my dresser: 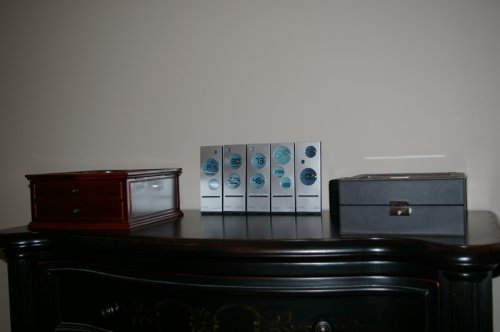 That’s watches to the right, the weather station in the center, and my dresser valet to the left, containing all manner of pocketables (wallet, handkerchief, pens, pocket knives, and the like). The terms “enpocket” and “depocket” are in my vocabulary. What of it?

Here is the driver drawer of my tool chest: 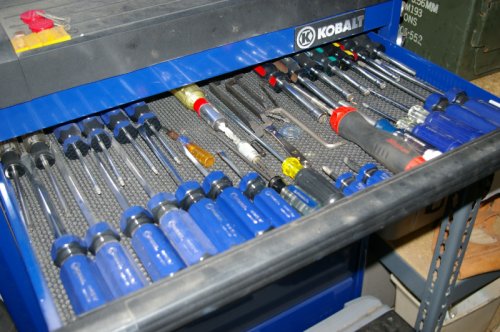 I’m trying to head off chaos here as the boys grow by building each of them a tool chest of their own. My dad had (maybe still has) a killer #2 Phillips stubby red-handled screwdriver that I was eternally borrowing (and not returning). It was a great tool, so he was missing it all the time, naturally. I hope to bypass that kind of thing with my plan. As the boys wish to use tools, we’ll have father-son moments at Home Depot or Sears, talking about what to look for in a tool, how to safely use it, and the like. And they’ll get another drop in each of their respective personal tool chests, courtesy Dad.

You know you’re dying to know what my fuel economy was like two years ago, as mentioned above: 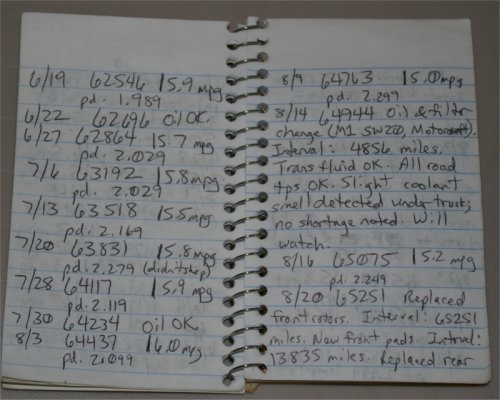 I see that at that time I was even taking the extra step of noting what I paid for each tank, as well. (My truck has almost 97,000 miles on it now, by the way.)

My pockets of order have worked well for me so far. Perhaps one day even all of these will be invaded, and I’ll be reduced to enjoying the hierarchy of directories on my computer, or delighting in the a-place-for-everything-and-everything-in-its-place philosophy in force in my daily driver’s glove compartment.

But I’m delighted to report that if I were going to snap, it probably would have happened by now.

Portable and scalable affections are a blessing. 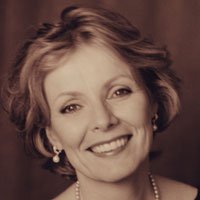 Not really, but after I came up with the title I couldn’t let it go.

In her column this morning, she gave voice to a relationship I’ve also given some thought to: wealth enables connectivity, and connectivity enables rudeness. My favorite passage:

Technology has not helped in this area. Cellphones are wonderful, but they empower the obnoxious and amplify the ignorant. Once they kept their thoughts to themselves. They had no choice. Now they have cellphones, into which they bark, “I’m on line at Duane Reade. Yeah. Ex-Lax.” Oh, thank you for sharing. How much less my life would be if I didn’t know.

BlackBerrys empower the obsessed. We wouldn’t have them if the economy weren’t high and we weren’t pretty well off. Once, a political figure in New York invited me to a private dinner. I was seated next to him, and as the table conversation took off he leaned back, quietly took out his BlackBerry, and began to scroll. It occurred to me that if I said something live in person, it would not be as interesting to him as if I’d BlackBerryed him. It occurred to me that if I wanted to talk to him I’d have to BlackBerry him and say, “Please talk to me.” And then he would get the message.

The current state of the American economy is the greatest story never told. We have a president who is admittedly and inordinately easy to pummel on any number of issues, and what’s getting by in the whole process is that things are great in the pocketbook right now. We have record low unemployment, a record high Dow, a housing bubble that never quite seems to burst, favorable interest rates, record revenue into the treasury, and so on. $3 gasoline is a much smaller deal than it would be were all this not the case.

The proliferation of hyperconnectivity would be impossible without this strong economy. Many of us carry incredibly sophisticated communications devices with us everywhere we go, and give it little thought. If your wish is that you can’t not be reached, it’s trivially easy to fulfill. Such has led to some abhorrent social behavior. Do you not realize, ma’am, that thumbing away at your BlackBerry in a meeting for an extended period is no less offensive than pulling out a magazine? Do you not realize, sir, that there is no need for you to speak any more loudly into the mouthpiece of your cell phone than there is for you to speak for a person sitting across the table from you?

I think wealth envy is silly, and that’s not what this is. Dude, it doesn’t bother me that you’re rich—it bothers me that you’re rude. I assure you, nobody in Viet Huong gives a rat’s ass what your portfolio is doing, who your assistant is banging, or about the level of your disbelief at what an oil change for your Lexus costs. (You think it’s unnoticed that you don’t talk nearly as loudly when you’re just chatting with your wife about what she needs you to pick up at the grocery store on the way home?) Shut the fuck up and eat your pho, and I’ll do the same. You can talk on the phone at the top of your lungs all you like on your drive back to work. (Naturally, that won’t happen; no audience.)

I’ve only just started carrying my cell phone with me everywhere—as in I wasn’t doing so even six months ago. I’m still getting used to it, though it’s been mostly all right. (I do always set it to a Quiet profile in restaurants.) And I have no desire to check my email any more often than I do. As it is, I hit my various inboxes no less than hourly, continuously, for nearly two-thirds of my life. That is accessible enough. I could easily have a BlackBerry, an iPhone, or any other omnionline combo phone/PDA, tomorrow. I don’t want one, and I sincerely hope I’m never asked to carry one. I like that my phone and my PDA are two different things.

These are tremendous conveniences, but there is nothing magical about them that supersedes decorum.
Thanks to kepplerspeakers.com for the Peggy Noonan image. Thanks to discoverblackberry.com for the BlackBerry image.

So this guy was looking for a cure for cancer, and accidentally discovered that saltwater would burn. Real hot-like, even.

Can we solve our dependence on foreign oil and eliminate concern about rising sea levels in one shot?

If this is a hoax, it’s expertly perpetuated.

Hey there! I’m glad you found me. I’m sorry for the inconvenience, but it ought to be the first and only of this nature. I think we’ll be settled in here for a good long while.

Been meaning to move WmWms anyway, but it got kicked way the hell up my priority list when blogger.com locked my blog last night. A bot decided it was a spam blog, so I couldn’t post anymore. Nice, eh? Worse, I got an email a little after lunch today telling me it was unlocked now, and guess what? It isn’t.

I still have a few things to tidy up—minor behaviors I don’t understand; “how do I…” questions; a second, more-informed pass at a theme sometime in the future; and the like. WordPress is a different world, but I don’t think I did too badly with it for an afternoon of fumbling about. Thanks to Saintseester for her encouraging email.

(I did finally give up trying to make the old page redirect to this one. I don’t think blogger.com permits it, any way I know how anyway. Add that to the list of annoyances.)

But take it all ’round, these are minor things for me to sort out when I’m a bit fresher. For now, welcome. I’m glad you’re here.