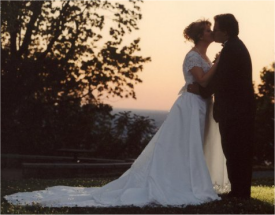 About five years ago, I was among several men waiting in a conference room for a meeting to begin. First, the conversation was a little work. Then it was a little football. It finally settled on talk of wives. You know, they’re balls and chains. They whine. They nag. Nothing’s ever good enough for them. They just don’t get it. Marriage is a trap.

After the meeting was over, a guy I’ll call Neal waited around, which was good, because I had something to say to him. (Turned out he had the same thing to say to me.) We had each noticed that the other didn’t participate in the wife-bashing. We shared a word about how much we thought of our wives. We started becoming friends that day.

Now if you’re having problems in your marriage, it might well be appropriate and helpful for you to discuss it with a friend.

But we all know “this ain’t that.” This is a category of guy talk that is supposed to be something we can all relate to, so it’s a good standby. Moreover, this was the milder version. If there’d been beer, or isolation (boat, camping), or both, it might well have been much more vulgar, with talk of “the ol’ sperm bank” or even that c-word which is one of the only words you’ll never see on BoWilliams.com. It’s just settled into the narrative as something men do – certainly not all men, but too many men – when they’re on their own.

Most of the time I say something pretty direct now when I encounter it. “Yeah? Wow, that sounds terrible. Why are you still married?” That usually shuts it down quickly. Sometimes I even get a “what are you, one of those?” kind of look. Yeah, I am one of those. I’m one of those men who loves his wife.

Are there bad wives? Of course. My long observation is that there are many more careless or even downright disrespectful husbands.

I told a younger professional not long ago that she was someone’s exemplar. “What do you mean?” she asked. I told her that if you do something for a while and you get good at it, someone is almost always watching you to see how to be. Most of the time you won’t know it. But if you’re a professional of any accomplishment whatsoever, someone is modeling behavior to some degree based on yours. Someone is using decisions you make as input into his/her moral compass.

I believe that about personal relationships, and particularly marriage, as well. Look, I know it’s a slog sometimes. If it were never difficult, then the divorce rate wouldn’t be at 50%, and I would never have written a ten-post series on it. If I’m out there for even one person who decides not to quit because I haven’t, then I’m very grateful for that. And God bless every husband and wife making it work and passing on the bashing sessions. If you wouldn’t say it in front of her, then don’t say it to anyone else either.

Who else are we modeling behavior for? Gee, any future wives or husbands living at your house? If I ever get cocky (which, believe it or not, is not often with this), then all I have to do is consider that every time I interact with their mother, I’m showing them how a husband treats his wife. That’s heavy. That straight-and-narrows me in a hurry.

(Of course, Lea is also showing them the kind of woman they should select. But she just has to be herself, so surely that’s not as stressful. Heh.)

Whether they’re doing it consciously or not, our boys are thinking “OK, Daddy tells Mommy he loves her, and Mommy tells Daddy she loves him. And this is how they act. This is what it means to be married. This is how people who love each other treat each other.” That’s what we’re carrying. If you have little folks living at your house, then that’s what you’re carrying, too. The future of the institution of marriage is there. If we are ever to save it, it will be with sending well-equipped, sensibly taught young people into it.

Now tell me how critically important it is that you bitch about the dishes again.

Back when I spent a lot of time playing and studying chess, I tried to analyze, as deeply as I could, at least one famous grandmaster game per week. I would try to understand what each side was thinking; what his/her plan was. Though I would frequently miss subtle connections between something in the opening and the endgame (until I read the analysis), I could usually understand what a player was trying to do.

This was consistently hardest for me with the games of Anatoly Karpov. One of the greatest players of the past 100 years (or really, ever), Grandmaster Karpov usually played a patient, positional game, accumulating small advantages while he waited for his opponent to make a mistake.

And when that mistake came, as it almost always did, he methodically and mercilessly squeezed the life from his opponent. It was brutally effective, but hard for a young chess enthusiast to appreciate. It was easier and more fun to follow swindlers like Frank Marshall, or brutal attackers like Alexander Alekhine.

Karpov embodied (past tense not because he’s passed away, but because he doesn’t play much anymore) the beauty and maturity of biding one’s time. He appreciated that the best progression of events wasn’t always the obvious one, and that patience would reward him, more often than not.

Are there lessons here for marriage? There certainly are for me.

It was hard for me to grasp those games because I wanted to see the point as quickly as I could. I wanted the game resolved. And, though I’ve improved, I still bring that attitude to parts of my life, most notably my relationship with Lea.

Lea and I are thinking people, living and making decisions together. We are going to disagree. Most of the time we get along beautifully, and even when we do disagree, it’s short-lived and we handle it maturely.

When we disagree or are upset with each other for any length of time, all too often I have an unfortunate habit of trying to inflict my timeframe of resolution on her. If I’ve got it resolved, then I want her to have it resolved too—right then. I have an answer, Lea, so here it is, you say yes, and we go back to where we want to be, which is not upset with each other. Go!

Yeah, that doesn’t work so well most of the time. Whatever we’re disagreeing about, that failing is pretty much all on me. Even when I know—especially when I know—that she’ll get to where I am, I need to back off and allow it to happen. (Believe it or not, the active isn’t always indicated.) It’s something I need to continue to work to eliminate.

For one thing, it’s selfish. Different people resolve different kinds of problems in different ways. My way is not better; it’s just mine. It’s easy for me to see how unpleasant my impatience is after the fact. I need to work on seeing it when I’m in the middle of it.

For another, in a way, it’s disrespectful of our marriage in general. If we’re signed up to be together forever, and I believe that, then why I am behaving as if it’s a massive tragedy for us to be unresolved for four hours instead of three? No, it’s not fun to fight, and minimizing those times should be a continuous goal. But desire for resolution shouldn’t trump reasonable work-it-through time for your spouse, even if it’s not quite the same as yours.

I’m fond of saying that the most tragic thing about loss of youth is that it takes more and more to impress you. My logic is that the older you get, the fewer opportunities you have to see something for the first time, right?

I’m revising that a bit, though. One thing you appreciate more with age is the beauty of restraint. Some problems just don’t respond to bigger-better-faster-more. Some require a nudge. Some just need you to go away for a while.

I’m better than I used to be at this, but I’m still not where I should be. It remains a growth opportunity.

(Warning:  This post contains explicit sexual content.) Lea and I attended a performance of Rock of Ages last year at the Von Braun Center. It was well attended by our demographic of Generation X, but also by many considerably older people. I presumed they were vested in the Broadway Theater League in some way or […]

One of the most glorious naïvetés of my adulthood was how I thought—hoped—Generation X would approach divorce. Our parents were the first generation who divorced without significant social stigma, so they did it a lot. We, their children, got a good, solid look at more broken homes and stepfamilies than anyone previously had. I thought […]

Chances are excellent that the most intense fight you’ll ever have will be with your spouse. S/he knows just where to hit you, for one thing. For another, the consequences of a major mistake are potentially graver than with nearly any other relationship you could have. When you fight with the person you’re married to, […]