I happened to catch a Jonah Goldberg column comparing and contrasting Mitt Romney and Newt Gingrich only today, though it’s most of a week old.  Goldberg is generally a good writer, but he excels at funny and illustrative imagery.  I’ve laughed all day at this (laughing now, even):

It’s quite a matchup. Romney has been brutalized for having too little personality, Gingrich for having way, way too much. Romney looks like the picture that comes with the frame. Gingrich looks like he should be ensconced in royal velvet as he gestures at you with a half-eaten turkey leg in one hand and a sloshing goblet of wine in the other. Romney seems terrified of fully committing to any idea. Gingrich speaks as if he just text-messaged with God.

Oh, the velvet, turkey leg, and goblet of wine is a scream.  Times like this I wish I was better at Photoshop.

Look, whether it’s Mitt Romney, Newt Gingrich, Herman Cain, Eminem, or a quart jar of organic applesauce, I’m voting for whoever/whatever runs against our esteemed president.  So Romney would get my vote.  I wouldn’t be excited about it, but he’d get my vote. 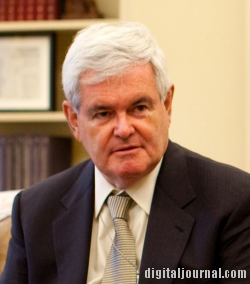 But I could vote for Gingrich with—dare I say?—a bit of gusto.  I’ve been eligible to vote in five presidential elections, starting in ’92.  My votes have been Clinton, Dole, Bush, Bush, McCain.  I was probably most excited about ’92.  I was just out of college, and I believed there was such a thing as a “different Democrat.”

Since then?  I suppose Sarah Palin energized my vote a bit last time, but I’ve never really had any punch about it.  I might could muster some punch for Newt.

Love or loathe him, he really does tend to be the smartest person in most rooms.  (Wouldn’t you love to see him dismantle Barack Obama in a debate?)  Of the current plausible results, he seems like he might have the best chance of getting some traction on rescuing the republic.  Indeed, I’ve spoken of him favorably before.  I’ve also said he’s too damaged to be electable.  He’s made some questionable personal decisions, and in case you haven’t noticed, he’s just a tad arrogant.  Heh.

I wonder, though, if he might be bringing enough humor and modesty to it this time around to skate juuuuust enough.  I think his response to his current success will say a lot.  The old Newt would react too self-importantly and blow it.

But let’s watch the 2011 Newt for a couple of weeks and see what happens.

I’m an assistant coach for Nathan’s Upward team this year.  We just came back from our first practice of the season.

Honestly, initially I signed up to help, but also significantly because I wanted to ensure that Nathan got this particular coach of whom we think an awful lot.  But it’s also become partially because I’m considering volunteering to be a head coach next year and want to learn.

Now mind, I’m getting more exercise now than I ever have in my adult life, but most of it is walking.  Tonight’s exertion was relatively brief but definitely vigorous, and I didn’t prepare enough for it.  Even now, when I got up from my office chair, there was a slight twinge in the backs of my calves.  It was neither comfortable nor all the way to painful.  I think it’s foreshadowing, though.  I distinctly heard my calves say “ooooh, I’m gonna get you in the morning, you stupid son of a…”  Maybe I’ll put some ibuprofen and a glass of water on my nightstand, take them when I wake up, then snooze for 20 more minutes.

It’s good timing for me to get more active, really.  I’ve not full-on regressed, but part of me has apparently decided he’s just delighted with languishing in the upper 260s instead of going hammer-down and starting the major loss again.  I won’t call it a plateau, because I know why it’s happening.  (Isn’t it a plateau only when you really are doing all of the same things but not losing?)

I was so fortunate to be up only a half-pound at this morning’s weigh-in, when it was a fairly undisciplined four days preceding.  Time to build on that unexpected blessing.

I think “they” are a bit touched.

I am well pleased with the final score of the 2011 Iron Bowl.

Alabama’s domination of the line of scrimmage was severe and relentless.  Auburn was never a threat to win the game.  I’d have loved any victory, of course.  But I really love being in a position to pick style nits, like arguing about whether and to what degree Auburn’s touchdowns were gifts.

And oh, my, was that final Trent Richardson run a jewel. 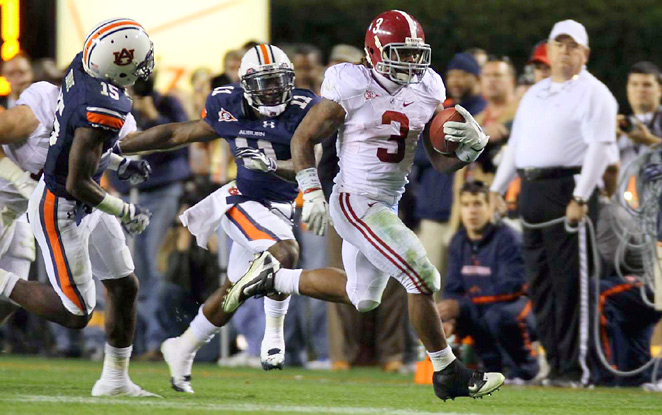 Now, unlike far too many Auburn fans who honk like geese whenever their team manages to claw its way out of mediocrity for a year or two, I’m not much of a rubber-inner.  Superficially, this makes me appear polite.  Except then you learn that I’m not making a big deal of it primarily because I regard it as restoration of the natural order, which might make me one of the biggest jackasses of all.  (I don’t lose much sleep over you thinking that, by the way.)

This evening I have very much enjoyed my Twitter feed filling with #WDE coulda-shoulda-woulda.  (I’m particularly savoring the bloviations of one who is on and on about how Alabama plays dirty, when she sounded ready to have Nick Fairley’s children last year.)

As to whether Alabama should get a rematch against LSU:  ladies and gentlemen, the way it works is the way it works.  Is the BCS authoritative, or not?  If so, we all have to be beholden to it and quit picking at it.  And clearly we’re not, and clearly we haven’t.  Wrote about that before.  Fortunately, “they” are deciding pretty much as we speak how it should go in the future.  I do find it incredibly ironic that all this talk is going around about the voters essentially deciding for or against, when one of the big selling points of the BCS to start with was reducing human subjectivity.

I also think it’s quite clear that this year, there is LSU, Alabama, and everyone else.  Do you put the two best teams in, or not?  If not, what’s your rationale?  Spite?

Wherever Alabama goes, I’ll pull for them mightily.  If it’s not the title game, I shall do so without grousing.  (It does, after all, still remain that had they not lost, there would be no such debate.  More importantly, the terms are known, and those terms have a big human factor.)

Roll Tide, my friends.  Auburn, ‘preciatcha.  What say we do it again next year at our house?

I haven’t been out.  I have no plans to go out.  If you know me even a little bit, that doesn’t surprise you at all.  I don’t like normal crowds, much less day-after-Thanksgiving insanity.  Amazon Prime is a beautiful thing.

Cut my hair this morning.  Watching some football.  Got some shrimp I need to do something with for dinner.  And that’s about as complicated as it’s going to get.

Whether you’re wading in the cacophony, staring at the wall mouth-breathing, or something in between, I hope your Friday is going to suit.