Other Inglehoffer mustards remain available in my area, but the Sweet Hot variety has vanished from store shelves for some reason.  It’s definitely systematic.  I don’t know whether it’s regional, or the start of a discontinuation, or what, though at least one other person has complained of its absence on Facebook.

I’ll probably ultimately write a letter or make a phone call.  As you can see, though, it’s pretty much solved for me for a good while.  Found these on Amazon.com (hat tip, Jenny).  They have a best-by date of August 24, 2012.  I don’t know if I’ll use all of this by then—a little goes a long way—but even if I don’t, I’m sure it’ll remain fine.  Mustard is made of things that tend to keep well.  Happy times!

To me, the debt ceiling joke has served as the strongest indicator yet of just how bizarre this presidency is.

I no longer believe, even slightly, that Barack Obama has any sort of articulable philosophy of governance.  He takes a lot of criticism for being vague in these debt ceiling “negotiations,” but I am now convinced that he can’t be any other way, because there isn’t anything there.  It’s not that his proposal is a secret, or that he’s “playing it close to the vest.”  It’s that it doesn’t exist.

Imagine you’re in a burning office building. Obama’s plan for getting out alive: “Okay, you guys break up into different groups and come up with a series of proposals about how we get out of the building. I will then negotiate with each of you separately and then together, and then separately. Then I’ll get on Skype and tell the world what I think of your respective plans and criticize you for their lack of seriousness. I will insist that we have balanced approach of applying both water to the fire and opening the windows, which some say will only provide more oxygen for the flames. But my base says window-opening is essential. Oh and I will blame all of the gasoline I threw around on the lower floors of this building on the guy who moved out two years ago. And I will veto any plan that requires we have a new plan should we get stuck on another floor. And, did I mention this mess was created by the former tenant and….ahhh what’s that smell?

I think that when Obama is away from the comfort of prepared remarks, he must bottom out at vague reassurance as his guide.  To the extent that he thinks at all, he must think that well, there are a few million people around anyway who think this hard left thing is a good idea, so it must be defensible, and also all the correct people wail when I do it, so onward.

For all of the ridiculous insinuations about Reagan’s or W’s lack of intelligence, has a sitting U.S. president ever said anything more boneheaded than “don’t call my bluff”?  Is that the statement of a man who understands anything about persuasion or negotiation?

Earth Fare opened in the old Circuit City location a bit more than a year ago.  Never been before today, but I heard they had bison steaks, so I wanted to check it out.  Saintseester, Terri, and I all went together, for three times the laughs.

So this is the story of the three knuckle-dragging conservative rubes descending upon the natural foods grocer.

Earth Fare has a cafe area up front, with sandwiches and stuff, as well as a large salad bar.  Salad is $7.99/lb., which may sound a little high, but remember it’s all super-duper produce, without steroids and with no little kids picking it for fifteen cents a day and stuff.  Plus, despite my initial fears, everyone sitting near us seemed to have bathed recently.  So that was a nice bonus.

After we ate, we went exploring (and I’m delighted to report, no one tapped us on the shoulder and whispered “I really think it’d be better if you three left.”).  Here’s Terri checking out the wine.  Conservatives are lushes: 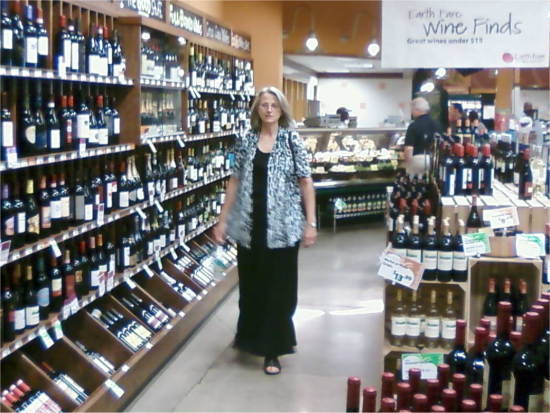 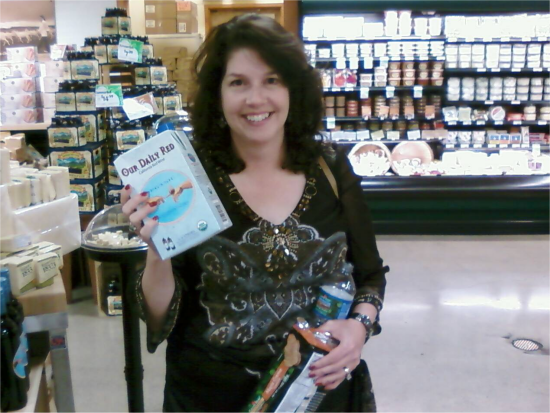 Bison New York strips on the right.  Definitely only an occasional treat, at $18.99/lb.: 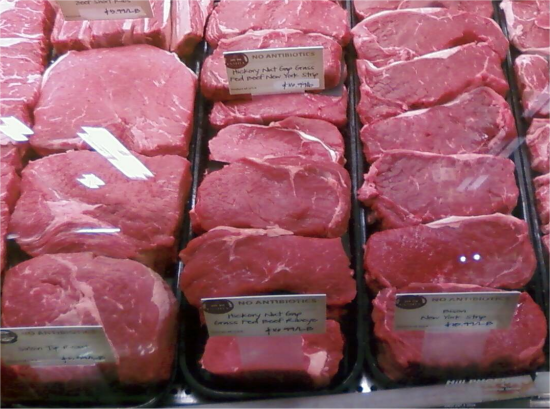 Terri and ‘seester trying to make some sense of the spices: 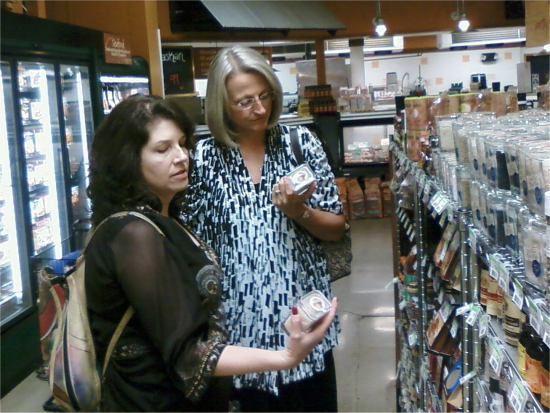 This was an unfortunate bit of RAAAAAAcism we found: 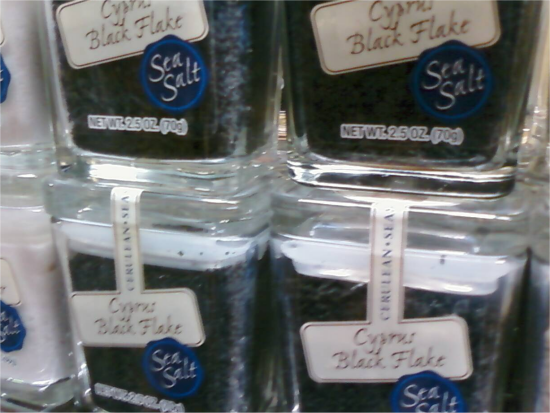 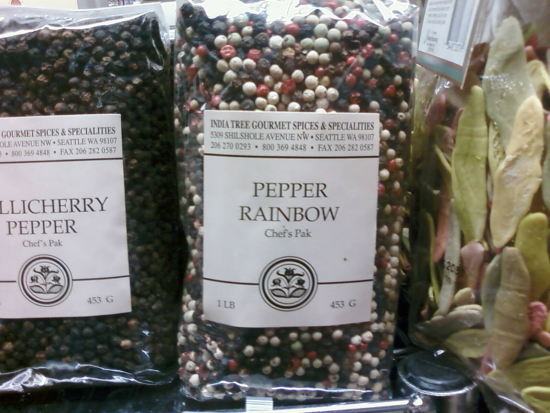 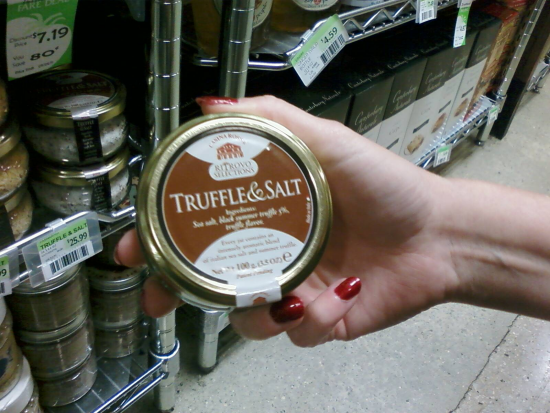 My normally delightful companions wondered aloud about the possibility of making a paste of this: 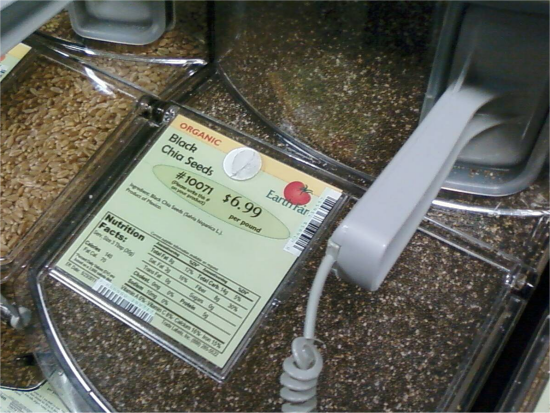 And smearing it on this, for an all-natural Rogaine: 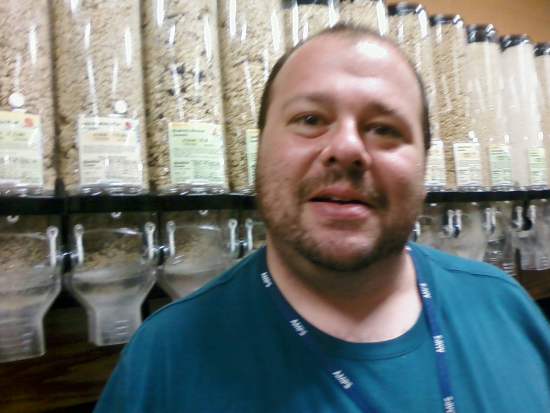 I’ll go back.  See you soon, Earth Fare.  I want grilled bison NY strip in the near future. 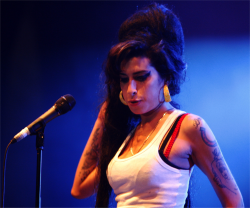 Singer Amy Winehouse was found dead in her home Saturday.  She was 27, so much is being made of her consequent inauguration into the 27 Club, which includes Brian Jones, Jimi Hendrix, Janis Joplin, Jim Morrison, and Kurt Cobain.

An autopsy is scheduled for today.  There are all sorts of disturbing potential causes of death that, in Winehouse’s case, would only generate an “oh, of course.”  The only shocking finding would be one not directly connected with the merciless ravages of substance she inflicted upon her body.  (You don’t casually happen upon an emphysema diagnosis at 24.)

I’m heartened to see a bit more prudence and common sense in the coverage of Winehouse’s death than I remember in Cobain’s.  Now by and large, we’re not going to get all the way to a straight “this could happen to you if you don’t straighten up, young people,” because well, that’s judgmental and moral, and you know, God forbid.  We are seeing, though, a sustained lack of surprise that’s getting some traction.  Perhaps this is crass nonchalance, or perhaps it’s as close as we’ll get to a good societal lesson from this.

About 6 hours ago from Bo Williams's Twitter via BoWilliams.com