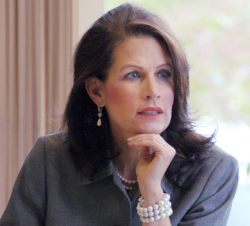 So Michele Bachmann’s in.  She’s running for President of the United States.

By the way, she has a vagina.

Oh, and Sarah Palin has a vagina, too.

Now, because both Michele Bachmann and Sarah Palin have vaginas, they can’t possibly both run for the Republican nomination.  Right?  I mean, I missed the directive.  I am 40 now, and a little slow on the uptake sometimes.  But it’s clear that it’s there, because probably two-thirds of the time when I read about Bachmann officially declaring, there’s some sort of coda along the lines of “hmmmm.  This is intriguing.  Will Sarah Palin run, now that Bachmann is in?”

What is that?  Could it be a liberal media obsessed with identity politics?  When do we see the editorial that pines “you know, it’s a shame one of them isn’t a little butch or something so we can tell them apart”?

Or “how can the Republicans be expected to choose between two girl candidates?”?

Jerry Gray taught me world history when I was in the tenth grade at Oxford High School.  He’s one of the first people I remember meeting who had a truly staggering amount of knowledge in his head and at the ready.  He never used a written plan or a book when lecturing; he just talked.  It was conversational, but slow enough for you to take notes.  I did very well in his class; better than in any other history class I ever took, I think.  It was a pleasure to listen to someone so enamored and in command of his subject.

I was pleased to run into Mr. Gray again on Facebook a couple of years ago.  We exchanged messages, and I was delighted that he remembered me fondly.  It was satisfying to have an adult relationship with him, however casual.  I’m certain I’d have enjoyed hanging out with him once in a while, had we been more geographically convenient to one another.

He was a warm, witty man, who never left anyone he touched with anything but positivity.  He raised two beautiful and accomplished daughters.  On Saturday night, he got married.  And Sunday morning, he didn’t wake up.

You know, some things just suck, and that’s one of them.  I will never be convinced that there is any sense to make of such.  It just is.  I don’t struggle with this kind of thing being part of “God’s plan” any more than I struggled with my father-in-law’s brutal, undeserved decline being such.

I wish comfort and peace to his wife, his daughters, everyone else close to him, and the many thousands Mr. Gray touched as an educator and friend in his 69 years.  RIP.

We officially joined our church, and the boys were baptized, this morning.  (Actually we’re pretty bad “joiners” in the usual sense of the word—took us four years of nearly-every-Sunday visiting, though also in our group this morning was a family who’s been attending regularly for fourteen.)  Today was the result of much thought and prayer, and I’m absolutely delighted to be here.

I am much more interested in identifying as Christian than I am a specific denomination, and I consider it mostly incidental that Good Shepherd is a United Methodist congregation.  What I am mostly deeply attracted to, and proud to be part of, is that this vibrant body of Christ demonstrably believes in being His hands and feet for the community, both locally and around the world.  A strong second is our church’s lack of concern with a lot of the peripheral issues that serve mostly to divide us, and to no real constructive purpose.

In essentials, unity; in non-essentials, liberty; in all things, charity. – Methodist maxim

So how cool is this?  Here is my father-in-law posing with an example of one of the most iconic and socioculturally charged road signs in the world.  Lea and her family put this between 1961 and 1964.

Marvelous!  Wish he was still here for me to ask him about it.

About 14 hours ago from Bo Williams's Twitter via BoWilliams.com