(Number of levels is revealed in this post; no other spoilers.) 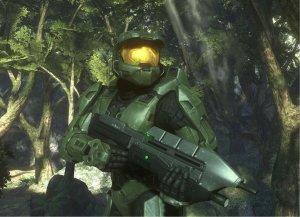 One of the only complaints I had about Halo 2 was that after the first level or two, I never had any idea how far along I was in the game. (Actually it probably would have bothered me about Halo as well, had I not been so drunk with the whole experience.) I never sought any online illumination on the issue because I didn’t want to risk a spoiler, which meant that its somewhat controversially abrupt ending hit me extra hard.

I paused my Halo 3 play today and considered all that had happened in the game so far. I estimated I was somewhere between halfway and two-thirds of the way through the game. Hmmm, how to find out? I decided to gamble on Googling a walkthrough, and glancing at chapter headings for the answer. (This was still risky; I read at what I have learned is an extremely rapid pace, and it requires a bit of effort to avoid doing that.)

I pulled it off without spoilers. To my slight disappointment, this evening I learned that I am just starting the eighth of nine levels. So I’ve finished about 78% of the game. The mistake I made was starting on Normal difficulty. I’m hardly ever dying, and as badly as I want to look around, I want to know how the story ends more, so I’m pressing a bit.

I should have played through the first time on Heroic difficulty.

I could rhapsodize about this game nearly endlessly. The visuals, the setups, the enemy AI, the drama…it’s all fabulous. There are multiple scenarios I’m looking forward to playing through again at a higher difficulty, and with more of an eye to exploring every square inch of the joint.  I’ve found a few entertaining side bits already—some humorous, others creepy—and I’m looking forward to finding more of them.

If I must muster a complaint, I’ll make it the music.  Halo 3 seems like it mostly uses the stock pieces, with any new stuff built around what we heard in the Halo 3 “the way the world ends” trailer.  As marvelous as the music for both of the first two installments was, this is a little disappointing.  I own both Halo and Halo 2 soundtrack albums, and I suppose I’ll buy the Halo 3 soundtrack when it’s released for the sake of completeness.  But I don’t expect much soul-stirring from it.

This is such a masterfully done franchise.  It evokes a lot of the same depth of wonder I felt at the first two Star Wars films. 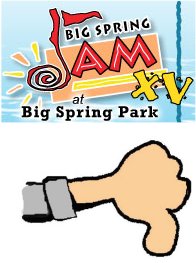 Last night we decided we weren’t going to attend the Big Spring Jam this year.

It was a tough call. The Big Spring Jam is a sentimental event for us. Lea and I started becoming a couple at the Jam in 1994. I had met her two months earlier at my girlfriend-at-the-time Jennifer’s birthday party, and was smitten with her then, and Jennifer had decided to move to Nashville in the meantime. By the time the Jam came around, Jennifer and I had removed the feeding tube from our relationship, even if it hadn’t quite expired yet.

So, fueled by liquid courage and a warm feeling at seeing her again, I opened a flirtation with Lea about 15 rows back from the one and only Webb Wilder, she reciprocated, and here we are 13 years later.

Plus, I’ve never missed one. This is Big Spring Jam XV, and I hate to end my streak.

Our original plan was to go tonight. But objectively, what it added up to was $80 out-of-pocket for walk-around dinner while we see and listen to Cracker and Seether. That’s at least twice what I’d spend for that opportunity under other circumstances, and the veneer of the Jam shouldn’t, and doesn’t, close so large a gap.

It’s an anemically weak ticket this year. A usual Jam lineup includes a first-tier star act or two, a second-tier star act or three, a few up-and-comers, a few local acts, a few old-timers, and a few old-timers using a storied name with an often only tenuous connection to the personnel who made the name storied in the first place. It’s generally not difficult to come up with four or five folks you wouldn’t mind seeing, with one or two for whom you make some effort.

Uh, not this year. Check out the lineup here and see if you see anybody who makes you say “oh man, I gotta see them.”

Also, I hear from a friend who is a prominent local musician that the Jam doesn’t have any local acts this year because they didn’t want to pay them, which is just sorry. This may be part of why they’ve compressed the hours, as well. The Jam has always been Friday evening through Sunday night, with the gates opening around noon on Saturday and Sunday. This year they’re opening at 4:00.

Thank you in advance.

Last night our across-the-street neighbors hosted a large party for their 14-year-old. She is a sweet, responsible girl who looks adults in the eye and speaks in complete sentences. They’re good folks.

At the party’s height, there were a couple of dozen vehicles present, none of which were parked inappropriately. There was a baseline din, but nothing approaching excessive noise. The party was considerately executed, generating no reasonable basis for complaint.

But boys will be boys.

Our doorbell rang about 11:15. We had gone to bed, but weren’t yet asleep. We got dressed and went to the door, and—surprise—no one was there. Ring ‘n’ Run lives in 2007. I was once the predator; now I’m the prey.

Revenge would soon be mine.

I was all the way back to full awake, so I decided to stay at the front door and look out the window for a bit. (Stealth mode; all lights off.) Sure enough, it wasn’t but a minute or two before five or six boys assembled in the front yard across the street to make more nefarious plans.

They schemed about thirty seconds, then moved to the driveway of the next-door neighbor to the south and had yet another meeting. At that point all but two of the boys peeled off and started ambling back to the party. The remaining two walked up the sidewalk to ring up another victim.

I waited until they got on the top step, three feet from the bell. Then I quickly opened my door and yelled “Y’all get back to the party right now!”

I will forever relish the memory of the ensuing frantic scramble.

You know how in cartoons, when a character tries to run and his legs just spin in place? Heh, heh. Once they got traction, they returned to the correct backyard in about seven seconds, perhaps with a little tinkle spot or two drying on the fronts of their shorts.

We went back to bed chuckling, my unambiguous presence on this side of the parenthood line further cemented. 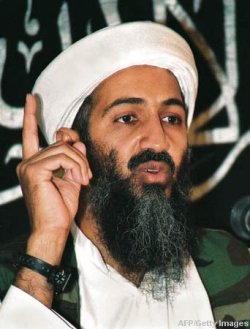 Columbia University today announced it has invited Osama bin Laden, esteemed leader of the international alliance of Sunni groups known as al-Qaeda, to speak to a group of ancient culture students.

“Doubtless he is an influential figure, and we can learn much from giving him an intellectual forum in which to express himself,” Dr. Igdupbenefa, professor of international affairs, said. “Moreover, this a marvelous affirmation of the First Amendment. No matter how distasteful we may find Mr. bin Laden’s views and alleged actions, it is important that he—and the world—understand that on a university campus in the United States, all views are worthy of an audience.”

Mr. bin Laden is expected to speak at the university’s fall conference. His speech will follow a psychology department-sponsored speech from some guy who lives down by the railroad tracks and likes to suffocate kidnapped children in an old refrigerator. 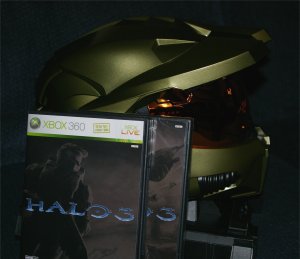 The Legendary Edition of Halo 3 is in my possession.

I won’t attempt any sort of comprehensive review. There are plenty of those out there if you want them, and I’d bet 100 new ones a minute are going up as I type. Some folks have actually played the campaign all the way through already, including a (middle-age, productive member of society) guy in my office who Halo 3ed from dusk to dawn nonstop.

Such is the power.

My primary advice to any new Halo 3 owner is to budget a good 20 or 30 minutes to look around before you try to play for real. The visuals can only be described as spectacular. The lighting, textures, and attention to detail must be seen to be believed. I savored the introductory cinematic and then tried to play, but it took me a good while to get past stumbling about with my jaw on the floor.

There are a moderate number of gameplay changes from the earlier Halo games. To me (and keep in mind I’ve only just dipped my toe in, so my opinion may change), some add value, and some don’t. However, to Bungie’s credit, the feel is there. It took me all of two minutes to feel comfortable putting the Master Chief through his paces, even with a couple of control changes. Kudos for keeping that; judging from the relative infrequency with which it’s delivered, it’s not easy.

I’m just two and a half levels in, but so far it’s looking like another grand slam. I’ve played literally thousands of video games, very few of which I would describe as genuinely special. The Halo games are the top of the top.