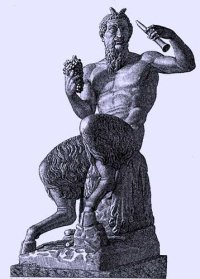 None of the churches I attended in my youth in Anniston had significant anti-rock ‘n’ roll/pop culture contingents, but several of my friends at Greenbriar went to private school at Trinity, which was substantially more conservative. So I got to hear about all of the anti-rock ministries coming in and around. We would go to the presentations recreationally–a practice I continued at least once more after we moved to Huntsville. Several friends and I went to see this guy about 1990 or so.

These passionate crusaders were (and are, I presume) a scream. We’d blast the music all the way out to the church, and then howl with laughter all the way back at the things we’d heard. We saw one guy who gravely warned that the Smurfs were Satan’s most insidious instrument yet for eventual world domination.

At some point, I had an opportunity to buy some books. I can’t remember exactly when or from whom, which bugs me, because I generally have a good memory for that sort of thing. They’re all from the famous/infamous Chick Publications, publisher of tracts sitting on a toilet tank near you:

I understand there’s a collector’s market for older Chick stuff, so three 20-year-old Chick anti-rock books are probably worth something to someone (even given the highlights and notes I scrawled throughout one of them as if I were responding to literary criticism, which I find equal parts of quaint and pathetic today). It’d have to be a whole lot before I’d consider parting with them. As funny as I thought they were at 15 years old, they’re nearly inconceivably comical today. For example, in The Devil’s Disciples: The Truth About Rock, we learn (and I swear I’m not making this up):

Most Rock tunes are in 4/4 time, four beats to the measure. This coincides exactly with the time signature of the human heartbeat. Thus, Rock music hits ALL listeners right in the guts, oozing its way like a ravenous leech into the most basic systems of the human body.

Ah. Gotcha. Sheesh, I’m never listening to or singing “Onward Christian Soldiers” again, because that’s in 4/4 as well. On AC/DC:

Widely thought to be a tribute to the late Bon Scott with its entirely unadorned, black cover, (sort of an LP in mourning for the fallen singer), “Back in Black” also can be taken quite another way. As all occultists know, to be “into the Black” is to hunger for evil and aggrandizement, to shun the light of all good works. In this sense, “Back in Black” means “Returned in full force with the power of Lucifer behind us.”

These books go on for hundreds of pages just like this.

And it’s not just AC/DC, Kiss, Judas Priest, and the like that gets it. Paul McCartney, Elton John, Heart, Cheap Trick–you name it, they’re all card-carrying agents of the prince of darkness. Who knew?

Stairway to Hell goes beyond rock. It hits it, of course, but it also hits Dungeons & Dragons, homosexuality, smoking, and all kinds of other stuff guaranteed to make you a crispy critter forevermore. The author of this one is seriously (fetishistically?) into describing hell to you, to be really damned (sorry) sure you get it. To wit:

“Oh God! No! No! No! This can’t be happening to me! Total blackness! Terrifying screams! God! Please get me out of here! I’m on fire! The flames are sizzling me! The smoke is choking me! The stench of burning flesh is turning my stomach! I can’t stand this pain. Somebody get me out of here!” – This is a gruesome description of one more teenager who just took the last fatal step down the eternally damning stairway to hell. This poor sap discovered a little too late that he had been deceived by someone who hated him and had devised a plan to make him suffer forever.

These little descriptions are scattered throughout the book.

It depresses me to think about how many people might be out there who would take these books seriously. To be sure, a minor part of these books’ content is straightforwardly positive (respecting your parents, studying diligently, and so forth). There’s probably a decent book in there. But it’s far easier to impugn rock music and make a lot of weird racket about demons and goblins than it is to take some genuine responsibility for the people your children are becoming. I thought that then, and I think it now. 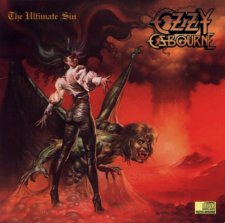 That I can recall, my dad made exactly one comment on my music during my entire adolescence. He had come in my bedroom to talk to me about something, and as he was leaving, my poster of Ozzy Osbourne’s The Ultimate Sin album cover caught his eye. “That’s kind of creepy, Bo,” he said. That was it.

I never got grief about my music because he knew who I was, and he wasn’t overly concerned about that person. Given that, what I was listening to was a mundane detail. That’s exactly where I’ll be trying to put my head with our boys in another five or six years.

Thanks to mlahanas.de for the image of Pan. 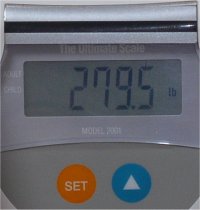 Here I go! There’s the starting number, in all its ugly glory!

This time, all I’m doing to start is counting calories and fat grams. I’m going with the government numbers of no more than 2000 calories and 65 fat grams daily. (Yes, I know those aren’t dieting numbers, but be assured they are substantial drops from my usual consumption.) I’m at 17.5 grams of fat and 971 calories for the day headed into a dinner of skinless baked chicken, so today is looking like a successful first step.

I’ll add an exercise regimen next, but I want this to take for several weeks first. If my history holds, I’ll drop 15 pounds nearly immediately, at which point I’ll get a lot more excited about getting more active. For now I’m only taking the little steps, like parking far from the door when shopping, taking a walk around the building on the way back from the restroom at work, and the like.

I’ll stay with just these changes until they quit working, and given how atrocious my unchecked eating habits are, that’s likely to be quite a while. Then I’ll add another change, and repeat.

I’d really just dearly love to have my shirt off at the lake for Independence Day, 2008. I don’t know what that number is, but I’m guessing it’s 200 or so. That’s a long way away, but it’s doable.

And I promise not to yammer about this all the time. I know it’s boring. I do appreciate the accountability, though.

My friends, for weeks now, the Internet whispers and rumors have tantalized us. Kraft, of course, has remained maddeningly tight-lipped: always polite, but never truly informative, in their responses to my many phone calls, emails, faxes, and letters.

Indeed, I’ve had to remain tight-lipped with many of you as well, though not by choice. Many of you consider me an insider in the hot, always-changing world of mass market sauces, so you’ve naturally sought any tips or inside information I might have had. Alas, I’ve had none to give you–until today. At last, I have solid confirmation.

When Lea returned from Publix and set it on the counter, I thought “this is the kind of day that it’s great to be alive.” Tearfully, I grasped the bottle, still not fully believing I was holding it in my hand. But there it was. It was real. It had finally happened.

Unfortunately, I had to go out and get some more, because I got so excited that I drank the entire bottle on the spot. There’s nothing like 18 ounces of more BBQ flavor in one shot.

To be sure, the exact more BBQ flavor formula is a closely held secret, and why wouldn’t it be? It’s worth millions. So it’s tough to tell what the exact change is, but for what it’s worth, here is the new ingredient listing:

It’s days like these–and products like these–that make me realize that Kraft is not simply a faceless multinational conglomerate, but a company that truly and deeply cares about making a positive difference in peoples’ lives. Thank you, Kraft, and kudos to the fine sauce artisans who made more BBQ flavor happen.

I was never much of an open-wheel guy, but I was a pretty big NASCAR fan until about age 12 or 13. It was hard not to be, growing up 20 minutes from Talladega (then called AIMS–the Alabama International Motor Speedway). Dad and I went to the Winston 500 and Talladega 500 several times (and I know these races are now probably called the Federal Express Gorton’s K-Y 500 or somesuch, but I’m a traditionalist).

We got over to Atlanta a time or two as well. I always preferred Atlanta to Talladega because it was large enough for decent speeds, but small enough to see everything. Talladega is so godawful huge that from the grandstands, the cars are just specks on the back stretch. From the infield, they’re slightly larger specks just about everywhere.

I lost a lot of interest as I entered adolescence, and I quit paying attention altogether when Neil Bonnett was killed. I’m thoroughly bored with what NASCAR has become today, though Nathan has some Cars-generated enthusiasm for seeing a race in person one day. So we may go sometime. 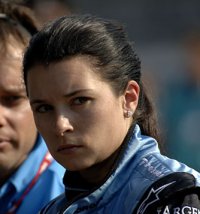 So why am I watching the Indy 500 today? Well, I’m excited about Danica Patrick’s chances and would like to see her win. Even someone as vastly ignorant as I am about current pop culture knows who she is. It’s tough for a guy to miss a woman who can model lingerie, then go drive a race car at 224 mph, and be a top-tier participant in both. More importantly, she consistently and firmly defines herself as a driver first and a woman second, discounting the novelty of her sex the media continuously tries to inject into her coverage. It reminds me of Tiger Woods similarly waving off his race. I respect that.

I also love that my sons haven’t “noticed” that the driver Dad’s pulling for is a woman. That is genuine progress. 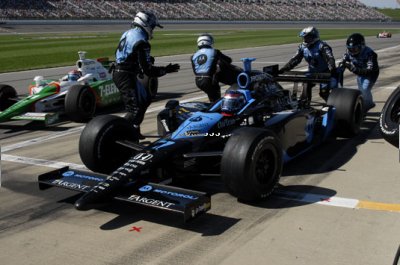 Thanks to danicapatrick.com for the images.

What’s that, you say? The federal government has finally recognized the grave security threat posed by the nearly completely open southern border, and is taking proactive steps to close it? They’re going to vigorously enforce the laws already on the books instead of blowing smoke up the asses of their fellow legislators and the American taxpayers? 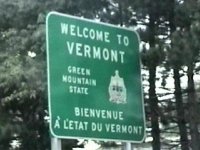 No. But they’re all over the hotbed of illegal immigration and smuggling activity in Derby Line, Vermont (population 776). You see, there’s a library there that lies on the border between the United States and Canada. The three unguarded streets around it present a significant problem. Apparently as many as 21 illegal immigrants were caught there recently.

Worry not, dear reader. Just as soon as the feds get a handle on Derby Line, which is quite obviously a superhub of international crime, I’m sure they’ll get to work on that pesky Mexican border thingy. I feel safer already.

Thanks to citynoise.org for the image.