There are three movies I traditionally watch every Christmas, and none of them is A Christmas Story:

Mixed Nuts was one of the first dates my wife and I ever went on. It’s also one of the only movies I’ve ever been to where significant numbers of people were actually leaving the theater during the movie. We were laughing so hard we couldn’t breathe. I was so pleased it finally came to DVD.

National Lampoon’s Christmas Vacation. Save the neck for me, Clark.

Die Hard. Didn’t remember it was Christmastime in this one, did you?

It’s just a coincidence that two of my Christmas movies star Juliette Lewis.

Mike Shula was fired today after amassing a 26-23 record in four years at the Capstone.

I was sure this wasn’t going to happen, and I don’t think it was the right call. I would have preferred a 2007 in which Shula remained, but had substantially changed his offensive staff and relinquished play-calling responsibilities.

All of that’s true. But let me tell you what else is true. Mike Shula was not a typical hire. When he was announced, I was a bit underwhelmed (I wanted Croom), but I knew exactly what the university was thinking. He was a ‘Bama man, for one thing: responsible for two memorable last-minute scoring drives in 1985, including the one that led to “The Kick” in the Iron Bowl. The perception was that we needed that; these guys outside the family either cut and run (Franchione) or get drunk and behave questionably (Price). More importantly, Shula was young and had pledged loyalty at a time when Alabama desperately needed stability. He’ll be around through the probation and beyond. Marvelous.

His big negative was that he had no head coaching experience. That was a negative we accepted in exchange for the positives. And now that he’s through the worst of the storm and in a position to excel, he’s been fired so that the next guy can succeed with his recruits (see Bill Curry, 1989).

Don’t get me wrong: 6-6 isn’t good enough. And I was furious when Mississippi State knocked our teeth in at our house. But as close as we were all season, I think the university and the fans owed Shula one more year, making the adjustments he needed to make. That was the deal we made with him: your loyalty and youth for our patience and understanding about you needing a bit of on-the-job training. I was proud of the maturity I thought his hire demonstrated at the time. Now I’m disappointed in the university’s painfully short memory of How It Was. It’s like Shula accidentally went 10-2 last year and doomed himself with his own success.

But, it’s done, and here we are. No way around it now: we need an alpha stud, top-of-the-top hire. Such will help minimize recruiting damage in the short-term, but more importantly, it will restore the shine to the job in the long-term. A guy who wins 50 games in five years, with maybe a West title and an SEC title in there, essentially makes a new reality at Alabama and returns the job from the swamp of “damaged goods” it sits in right now.

Every ten minutes today someone sent me a new Steve Spurrier rumor. His wife’s shopping for real estate in Tuscaloosa. This plane went here; that plane went there. You know the kind of stuff I mean. Well, bring it. I’m all over that. We’re to the point where that’s what it’s going to take: an enormous contract to a bona fide superstar. We can’t risk anything else. It takes a Spurrier, a Stoops, or a Brown and probably $30 million. If we can spend $4 million to run a guy off, we can spend that for 90-100 wins over the next decade.

When I was in the tenth grade at Oxford High School, a girl I’ll call Diane liked me. I was vaguely aware of it, though never gave it much linear thought.

On what must have been my 15th birthday, she decorated my locker with balloons and a card. And I was relentlessly apathetic about it. I don’t think I was nakedly mean to her; just noncommittal. I do know that today I think back to her doing that thoughtful and personal thing for me, and cringe at my utter lack of appreciation for it. It is only with adult perspective that I realize how emotionally extended she was, and how badly I must have hurt her feelings.

I have no idea what I was thinking. In hindsight we seemed perfect for each other: both bookworms, both socially awkward with most of our peers, both drily humorous. But my attention was constantly divided between trying to break up the assistant band director’s daughter and her boyfriend, and carrying the same torch I’d carried for three years for a dance team member who was polite to me, but who was never going to return my affections. And such worthy pursuits those were.

Today Diane is a writer–a brilliant and prominent one–and a beautiful woman. She holds a liberal arts Ph.D., which is something I wanted but didn’t have the chutzpah to pursue. She was a younger version of that same person then. Didn’t see it; too mentally busy with what I couldn’t have.

Mind, this is not a lamentation. I’m blessed beyond measure, and though it’s tempting to imagine what my life would have been like without the bumps, bruises, and heartbreaks along the way, things are mighty fine today. And nothing could have lasted long with Diane anyway; my family moved to the Huntsville area four months after the locker incident, though I can’t remember whether I knew that was going to happen at the time.

I didn’t have a significant love life until college. Until very recently, I habitually recalled this “solo period” as involuntary. Ain’t the way it went. I had a great girlfriend in hand and rejected her. It’s amazing any of us are ever happy with each other for any length of time, as emotionally bumbling as we are for the first third to half of our lives.

When you thumb through your life, make sure you’re accurately remembering how things went down, whatever those “things” may be for you.

We tend to exonerate ourselves. 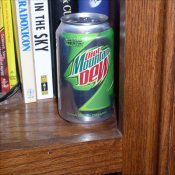 PepsiCo thought it would be a really keen idea to make Diet Mountain Dew taste all hyper-sweet and sports-drinky, so they changed the formula early this year. I was a serious, longtime Diet Mountain Dew consumer, so I put up a protest site. Jeremy at afterglide had one too. He had also started a petition a couple of weeks earlier that eventually accumulated 2,000 signatures. We were partners, in more or less daily contact, with plans to write a book after we became two kids from BFE who turned the gigantic international conglomerate around.

Didn’t work out that way. Oh, some cool stuff happened. We were each interviewed by a reporter with The Wall Street Journal. There were radio interviews, local news stories, and neat stuff like that. Ultimately, I emailed at some length with John Sicher, the editor of Beverage Digest. He shared some rough sales data with me that unambiguously demonstrated that PepsiCo had done the right thing reformulating Diet Mountain Dew.

We were prepared for anything except a sustained sales increase, which was unassailable.

It’s been strange since then. I got off caffeine completely, then trickled back on. Now I’m up and down day to day, with some combination of Diet Coke, Diet Dr Pepper, and Diet Sun-drop, with an occasional Diet Sunkist when I stop at a convenience store (which is no longer very often since I quit smoking). And, you know, there is the odd speedball or two on the weekends. Of course there isn’t.

I suppose I’ll pull the site down soon. It’s down to about 20 unique visitors a day, and the war was lost months ago (because too many of you like this nasty swill they’re calling Diet Mountain Dew now). It was a fine creative outlet for a few months there, and I got visitors from all 50 states and 60 countries. I’m still proud of a lot of the writing–I was REALLY PISSED, and strong emotion productively stimulates my right brain–so I’ll keep it available at my page somewhere. 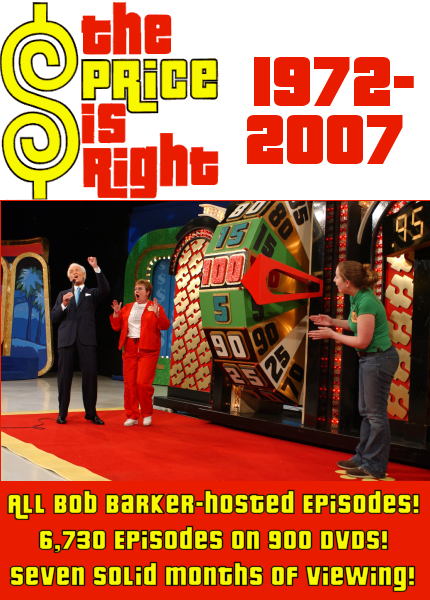 All 6,730 Bob Barker-hosted episodes on 900 DVDs! “Come on down!” and relive every turn in contestants’ row, every spin of the wheel, every pricing game, and every showcase for the past 35 years! This is enough The Price is Right to play continuously 24/7 for SEVEN MONTHS! Every episode painstakingly remastered and shown without commercial interruption!