I know you know the song—at least some of it, anyway, if you’re like me—but what do you know of its origins?  I didn’t know much.  Peggy Noonan’s piece is educational.

New Year’s Eve feels a little more arbitrary to me every year.  Any pressure to be doing something fabulous has been totally absent for years.  We’re spending some inside time with friends tonight.  Odds are excellent than when the new year actually arrives, I’ll be experiencing that state of greatly reduced consciousness, suspended sensory activity, and near-total inactivity of voluntary muscles known as “sleep.”  Hello, middle age.

If you’re going out, please be safe. 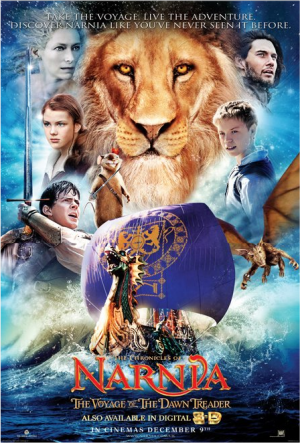 Lea, the boys, and I are just back from seeing The Chronicles of Narnia:  The Voyage of the Dawn Treader.  We took in a 3D showing at Monaco Pictures.

The Chronicles of Narnia series is precious to so many people, and doing the stories justice on the big screen is a tall order.  This latest installment makes it three successes for three, as far as I’m concerned.  I’ve stayed away from reviews because I wanted to go in fresh, but I’d picked up the impression that this film might be a step down from the two previous ones.

That wasn’t my view at all.  The acting, the writing, and the production design are all excellent, and bode well for the future of the franchise after the studio handoff.  The CGI is perhaps even more relentless than in the first two installments—understandable, given the subject matter—but it’s never gratuitous.  The effects consistently brought me into Narnia, rather than made me pause and marvel at what was possible with computers.

In a rich cast with several plausible candidates, Georgie Henley emerges as the lead.  This is quite a skilled young lady, and she does a marvelous job with Lucy’s triumphs and struggles.  I loved her quiet strength.  Other standouts include Will Poulter’s Cousin Eustace, who is fun to (first) detest and (ultimately) cheer on; and Tilda Swinton’s Jadis, who is back briefly but memorably.

I think my 3D verdict is in, as well.  This is the seventh or eighth film I’ve seen in 3D.  The boys like it, and I suspect we’ll continue to choose it when it’s available on movie trips, but it doesn’t add value for me.  After the short-lived gee-whiz at the depth, what I’m most struck with is how much darker it makes a film.  (I suppose it does give me some novelty to anticipate on the Blu-ray.)

As effectively as these films have brought the books to the big screen, there are a few deviations.  This film includes an element or two of The Silver Chair, for example.  Some purists have denounced these changes, but I don’t think they’re such a big deal.  It’s obvious the intention is to tell the entire story with clarity and purpose, and there is enough brute force talent on this effort to do so.

Given the source material, all three films contain Christian themes, of course.  I think they’re most overt in this one.  The film has much to say about faith, temptation, and redemption, and even a bit about heaven.  During an already tender scene, this teared me up a bit:

“In your world, I have another name. You must learn to know me by that name. This was the very reason why you were brought to Narnia, that by knowing me here for a little, you may know me better there.” – Aslan, to Lucy and Edmund

Bravo!  Bring on The Silver Chair!

All right, I’ve had enough.  With apologies to those I’ll disappoint, I’m for Oregon on January 10.

If the SEC’s national title streak dies with Auburn screwing it up, that’ll suit me just fine.  Just call it reaffirmation of second banana status.

National Review Online has a good editorial up today on what seems to be First Lady Michelle Obama’s primary pet cause, which is combating childhood obesity through extensive federal regulation.

As the editorial points out, Our Betters’ involvement in school lunches to this point has done just wonderful things for childhood obesity, such as heavily subsidizing the very sorts of foods that contribute to the problem.  But, as Dr. Thomas Sowell has noted in other contexts, these nanny-state programs are invariably judged on their stated goals, as opposed to their demonstrated efficacy.

For an administration prone to smug castigation of its predecessors for their allegedly insufficient deference to scientific expertise, the Obama team is here shockingly cavalier about a scientific question of substantial depth and complexity. If Mrs. Obama, between her undergraduate major in sociology, her minor in African-American studies, and her law degree somehow managed also to acquire a great deal of expertise regarding a medical issue that has proved remarkably difficult for actual scholars and learned authorities, she has not seen fit to share how and where she acquired it.

(Of course, you could also just say “where does a woman with such an enormous ass get off lecturing me about obesity?”)