You know the deal with this eBay crap these days. There are Virgin Mary crullers, and perfectly cervical kidney beans, and Colonel Klink-shaped pimientos. (You know, probably.)

Add to this list a corn flake that looks somewhat like Illinois that’s apparently worth a mortgage payment (and a car payment, in a lot of the country) to some flake (sorry) from Austin, Texas.

Yeah, and this isn’t his first attempted corn flake purchase either. 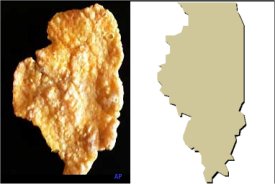 I would think that an Illinois-shaped corn flake, particularly one with a four-digit selling price, would follow a substantial percentage of the border’s contours. Nope. Indeed, the aspect ratio isn’t even right.

Also, and I offer this kiddingly, but maybe only half so—if some yo-yo’s got $1,350 for a single piece of breakfast cereal, how worried should we really be about the long-term health of the U.S. economy? I know it’s not fun to fill up right now, but, you know, just sayin’.

I remember Johnny Carson having some lady on one night who had saved all these potato chips that looked like things. I remember one looked like a sleeping bird.

So she’s going over her favorites, and Johnny is being super-gracious in that way he had (don’t you still just miss the hell out of him?). Then, his mischievous streak hit (see previous parenthetical comment), and he stuck a chip in his mouth and crunched it loudly. Of course, it was from a bowl of chips he had to the side. The woman’s look, Johnny letting her in on it, and the audience’s reaction all made for great television.

That’s the coolest kind of thing that used to happen to you when you had food that sort of looked like something. Now, it changes hands for four digits, and the new owner thinks he’s going to make a museum full of this kind of crap.

The sad part is that it may be a good plan. I’m certainly not begrudging any transaction participants here. Things are worth what someone will pay, after all. More power to the sellers of this corn flake, as well as the buyer who hopes to eventually charge other people to look at it. But it’s clear, and apparently consistently true over the long term, that many, many people dramatically overvalue coincidence.

I’ve not yet made any concerted effort to launch a BoCo, but maybe the business ideas I’ve been kicking around are all wrong. Maybe I just need to sift through boxes of corn flakes all day long.

8 Responses to “Corn flake shaped vaguely like Illinois sells for $1,350”