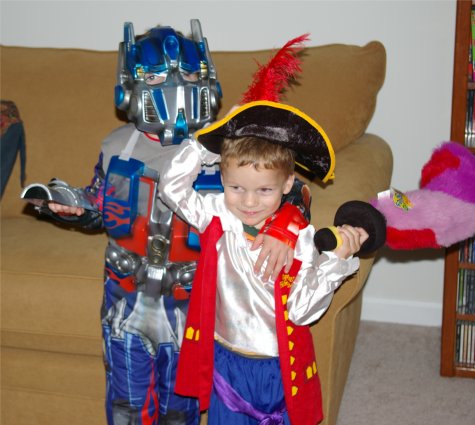 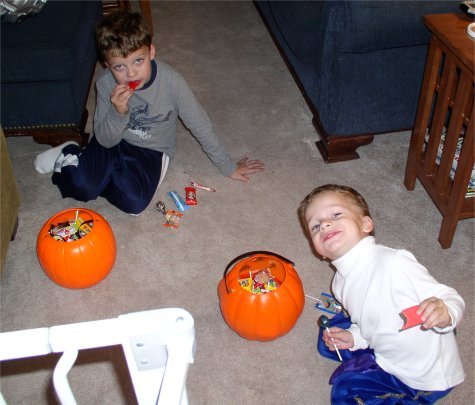 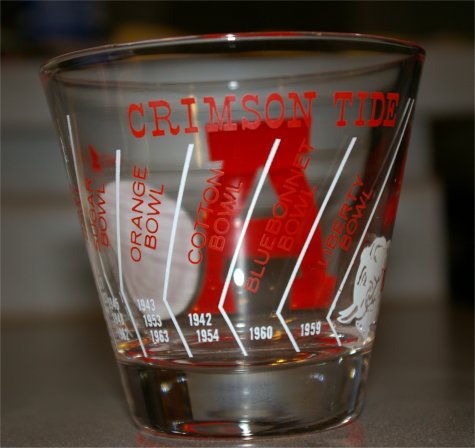 This is an Alabama Crimson Tide cocktail glass that belonged to my grandfather.  I have four or five of them.  I don’t drink from them often, but I make a point of it once in a while.  Look closely at this shot: 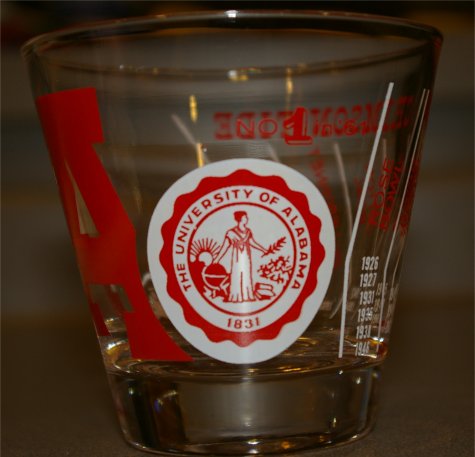 These glasses commemorate the 1961 national championship.  That’s 1961, as in Pat Trammell, as in Paul “Bear” Bryant’s first national championship team, as in the stingiest defense that ever played the game.  Alabama allowed 2.3 points per game that year, and shut out six teams:  Tulane, Mississippi State, Houston, Richmond, Georgia Tech, and Auburn.

I remember visiting with my dad once and gushing about the ’92 defense—a damned stout unit itself.  It looked like there were 15 guys on every play, so quick and intuitive they were.  Dad just took a tug on his ‘Turkey and said “yeah, they were good, but they weren’t ’61 good.”

I miss my grandfather.  My biggest regret is that he didn’t live long enough for me to give him a good chess game, but a close second is that I missed the opportunity to talk football with him and pick his brain on his friendship with Coach Bryant.

Nathan played his last game as a Red Flame Saturday morning.  They tied the Silver Dragons, 7-7. 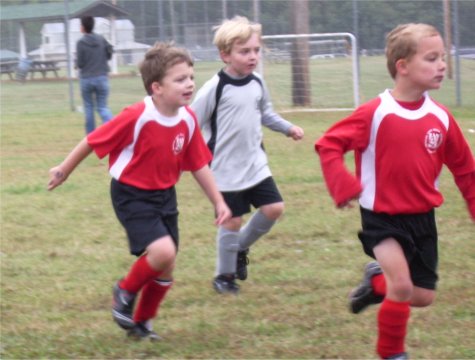 We had the end-of-season party and trophy presentation at Pizza Inn tonight. 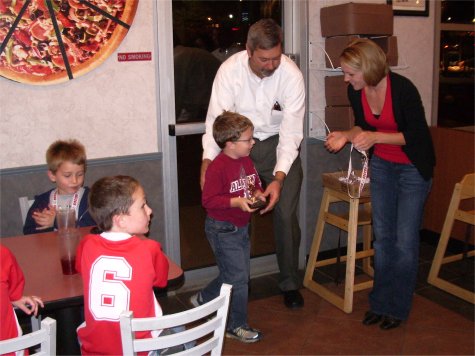 We had a wonderful time over the course of the season.  All of the boys had a blast.  Coach Chris and Coach Melinda were ceaselessly enthusiastic, and all of Nathan’s teammates’ parents were personable and involved.  Really, it couldn’t have been any better.  Here’s to many more.

After banishing the Xbox 360 and HD DVD drive to the lower bay in the interest of noise reduction, I got interested in just how hot it might be getting in there, so I collected a little data.  On the left is the room temperature, and on the right is the temperature in the lower bay of the entertainment center after playing an HD DVD for an hour:

This is with the main unit placed vertically, maximizing the open air exposure to the case vents.  I also tried to place the sensor in what I thought would be the coolest spot in the bay.

It’s about what I expected, and I think I’m going to let it ride.  The Xbox 360 manual describes an overheat error condition, and I didn’t trip that today after three hours of continual use.  So I think it will be fine.

It’s an entertaining little beastie, but if you get one, be prepared for the heat and the racket.

Saw Death Proof.  Loved it.  Off to Amazon.com for Vanishing Point.

Oooh, customers who bought Vanishing Point have also bought (the original) Gone in 60 Seconds.  Do I need that?  I borrowed it from someone already and liked it.  Do I need to start an “iconic car movies of the ’70s” sub-collection?

This chick Zoë Bell is killer sexy fodder.  Is she going to straddle me, or beat the shit out of me?  Or both?  Do I even care?  What else has she done?

Damn, that’s cool.  I might need “Twisted Nerve” as a ringtone myself.  Is that on iTunes?

Speaking of, why didn’t I ever buy the Kill Bill soundtrack albums?

Is Pulp Fiction out on HD DVD?

Lap it up, consumer-boy.  You know you love it.

RT @sammyhagar Future is bright for seeing The Circle live in 2020. Shades on for a big announcement on Monday. pic.twitter.com/NHB1…

@realmariamckee My advice is calm the fuck down and broaden the crowd you hang with. You're clearly in an echo chamber and have been for some time. It makes me sad. But, I am, yes, straight, white, male, and Christian, so you'll have that. I wish you peace, Maria.

@realmariamckee You are awfully pissed off, and I get that, but if you really do care about what you say you care about, you would do very well to channel your rage a little better. I presume you care whether you're effective? Or maybe not. Maybe screed replies like this is what you're after.