Veggie Booty snack food has been recalled because of a possible link with salmonella poisoning. So if you have any Veggie Booty in your house, please dispose of it and contact the manufacturers of Veggie Booty for reimbursement.

University of Alabama head football coach Nick Saban’s contract is available for review online here. As has been widely discussed and reported, the terms of employment Saban negotiated are impressive.

I have reviewed the contract in detail, and I must say, I was surprised by some of the provisions therein. Here are a few gems I found: 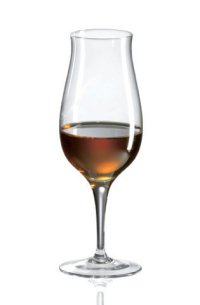 Saintseester’s enthusiasm for the espresso martini has inspired me to write about my own affections in that vein.

When it comes to the hard stuff, I’m a bourbon or Tennessee whiskey sort of fellow, with a non-small amount of affection for Canadian as well. I can drink Scotch in polite company, but it’s never my first choice.

I mix whiskey occasionally, but I usually have it either on the rocks in a highball glass (in the summer), or neat in a snifter (in the winter).

I keep several in stock, and have been exploring premium offerings from some of the folks whose “regular” spirits I generally keep on hand. Here are reviews of three I’ve tried lately (well, the last one is actually a years-old standby, but the first two are relatively recent):

Wild Turkey Rare Breed. Fire, fire, fire, and nothing but fire. I’m wholly underwhelmed with what is supposedly a premium bourbon from Wild Turkey. This starts off like downing a slug of acetylene, and finishes with all the subtlety of chewing up and swallowing a Bic lighter. It’s extremely disappointing, particularly given that run-of-the-mill Wild Turkey 101 is plenty hot itself, but with enough woody and spicy personality to make it all worth it. No character in this Rare Breed bottle; only heat. Hey, guys? I can get just as much heat for a hell of a lot less money than this. WmWms grade: F

Crown Royal Special Reserve. Much better. This is smooth, appealingly but not obscenely sweet, with a clean finish. Its main problem is that I find it absolutely indistinguishable from regular Crown Royal–itself no pedestrian spirit at $56 for the big bottle. I like Crown Royal a lot, but what am I paying for when I buy Special Reserve? Just a fancier bottle cap, it seems. WmWms grade: C 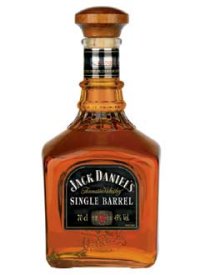 Jack Daniel’s Single Barrel. Oh, my. Oh, my my. One swallow is a bit smoky; the next, fruity, with a little maple note; the next, you just can’t tell, but it’s always a delight. Better keep drinking it to find out. I also quite enjoy the subtle variation from bottle to bottle. This is my drink. This is what I would be buried with, if I believed in taking earthly stuff with you (or being buried at all, for that matter). This taste is far beyond the relatively modest premium thay charged for it. I remember always looking forward to a sniffter of this to accompany Curb Your Enthusiasm, back when we had HBO a few uyears previosu. It’s just, um, really good, you know what I mean? I mean, like REALLY YUMMY. I realllly, really, REALLY like this….and stuff. I mean, I can’t hardlay talk and stuff tqylking about quite ahoauws much apoietuapiej i hoalkeja; eliea ahdgay.a dgancan AUI have ahgaontoher hone>? ahasdhawlheha, haskdlhreally agoahsahergabwsgal;ksdmf. ,dfmaiopjaom r’eikikikikikikikikikikikikikikikikikikikikikikikikikikikikikik

In 1982, Parker Brothers introduced an electronic accessory to supplement Monopoly called the Monopoly Playmaster (mentioned briefly in my earlier post on Monopoly). I got it for Christmas that year. My perception has been that it wasn’t that popular, but used units seem inexpensive enough today to make me question its relative rarity. 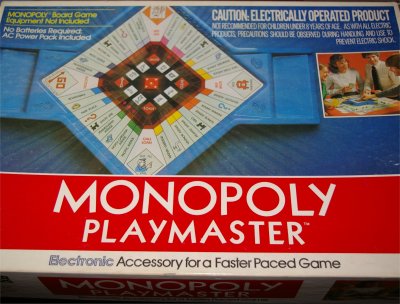 A lot of the net press is hard on the Playmaster. It’s frequently described as cumbersome, difficult, and sometimes even buggy. I’ll give partial credit on “cumbersome.” I never much cared for the cord exiting the board over the top of the Short Line Railroad vicinity, but I suppose it required too much juice to make it battery-powered.

But I don’t buy the rest of it. I think it does a good job of adding a few new excitements without changing the spirit of the game. And I guess our family didn’t get the word about it being difficult; we just read the instructions and started playing with it. We haven’t had family games of Monopoly in quite some time (really since my sister moved to Virginia, and my boys aren’t old enough yet), but when we did, we always used and loved the Playmaster. I can’t remember a time that it ever malfunctioned.

Superficially, the Playmaster automates dice rolling, keeps track of whose turn it is, and adds sound effects and tunes (a siren for going to Jail, “Charge!” for passing Go, “Merrily We Roll Along” for rolling doubles, and the like). It’s pretty basic stuff, with simple tone melodies and red LEDs. I’m not sure this end of it adds significantly to the experience, but I never found it offensive. 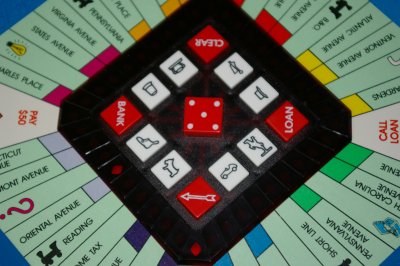 The real value of the Playmaster is in the three functional changes it adds, described below.

Auction
As long as there is unsold property, every few turns the Playmaster selects an unowned property to auction. Obviously this shortens the opening of the game, because all of the properties are owned more quickly. It also guarantees auctions in the game, which add some excitement.

After all of the properties are owned (and the Playmaster therefore doesn’t have anything else to auction), it switches to…

Buy Back
The Buy Back feature activates after all of the properties have been sold. It happens every six or seven turns. It randomly selects a property group, and if you own a minority of that group (or if they’re evenly distributed, like two railroads each between two players), you have to sell it back to the Bank. Then, whatever is sold back is auctioned as a unit. So if you own a single red, you have to sell it so it can be auctioned; two reds, you don’t. If a two-property group is split, both holders sell. If one player holds two railroads and two others hold one each, only the single holders sell. If one player holds three railroads, only the owner of the single railroad sells.

There’s a lot of fun strategy here. Obviously, if an entire property group winds up on the auction block as a result of a Buy Back, then the bidding can get blue-blooded quickly. But, it can also get wild if a single property winds up on the block (because another player has the rest of the group). How much are you willing to spend to keep her from having it? Might the player overvalue completing the property group? Can you exploit that? How far ahead is she thinking? Can you make her spend most of her cash to complete the property group and leave her no money with which to develop it?

Speaking of no money with which to develop it, if you find yourself in this situation, you might think about…

Loans
The only rules-sanctioned debt in traditional Monopoly comes from mortgaging properties. The Playmaster introduces a new one: the loan. If you own all of a property group and none of it is mortgaged, you can borrow the face sale value of the property group from the Bank. So for example, if you own Boardwalk and Park Place, you can borrow $750 on them, or if you own all of the railroads, you can borrow $800 on them. You can then use the money for whatever you want–to pay a big rent, to improve your group, or whatever.

Then, anytime after seven turns, the Bank can call the loan in. When it does, you have to pay back the loan amount, plus 10% interest. If you can pay, then you pay, and everything’s lovely. If you can’t pay (or choose not to pay), the Bank takes the properties you borrowed against. A property group can only have a loan taken against it once per game, even if another player took the loan and you now own the group.

If you enjoy Monopoly, you might pick a Playmaster up and see if you like it. There are usually a few on eBay, and they generally go for well under $20 delivered.

About 10 hours ago from Bo Williams's Twitter via BoWilliams.com