I have a square-cut nail. 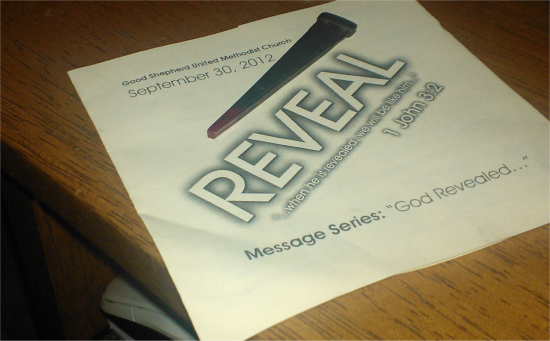 I got it this morning, right after I received the elements of Holy Communion.  I took it from a basket Brittany offered, like it was the most natural thing in the world.  She asked me to remember Christ’s sacrifice for me.  I said “Amen.”

There it is.  I’m not sure exactly what I’m going to do with it yet, but I’m confident the answer isn’t “put it in a drawer and forget about it.”

We would love for you to join us at Good Shepherd’s Reveal service.  It’s this Sunday, at 10:45.  Park in the Old Railroad Bed Road lot—on the east side of the church—and follow the signs.

On Tuesday night, Aaron usually goes with me to Nathan’s soccer practice, because Lea goes to stained glass that night.

This week Aaron and I threw the football on the sidelines.  It was the most fun I had this week.  I love being a dad.

In his annual speech to the UN, President Obama yesterday claimed that:

The future must not belong to those who slander the prophet of Islam. Yet to be credible, those who condemn that slander must also condemn the hate we see when the image of Jesus Christ is desecrated, churches are destroyed, or the Holocaust is denied.

Mr. President, you’re wrong.  The future must belong to those people as much as anyone else.  Sir, the First Amendment is mostly to protect speech that might upset someone.  You see, inoffensive speech doesn’t need protection.

Still missing it?  Let me help you.  Cavalierly tossing around one of our fundamental liberties as a bone of appeasement doesn’t get at the problem.  The condemnation properly belongs to murderous animals who slaughter innocents when they get their religious feelings hurt.

A truly honest mention of the phenomenon would also closely and accurately examine how often such is perpetrated by Christians and Jews.  Mr. President, in mentioning “hate” against such, but not properly accounting for how often said hate breeds brutal violence from Christians and Jews (which is never), you perpetuate the heinously false equivocation that religious violence is religious violence.  It’s that obnoxious “I think we all can agree…” construction that inevitably carries some gross distortion as its payload—in this case, that enraged, barbaric Muslims are one of many groups committing religious violence.

When, in fact, enraged, barbaric Muslims commit essentially all of the religious violence.

Here’s an interesting idea:  a city with no taxes on sales, income, or capital gains.  Construction commences in a few months.  According to the article, the Honduran government has stipulated that property taxes be collected, but that’s it.  Most of the rest of the legal system will be based on Texas state law.

After Katrina, a smart friend of mine floated the idea of a ten-year tax moratorium on the Louisiana and Mississippi Gulf coasts.  (You know, in the interest of getting large numbers of citizens, not just government officials, interested and invested?)  I’ve frequently wondered how that would have turned out.

About 4 hours ago from Bo Williams's Twitter via BoWilliams.com