So as I type, Lea and I are both online on different computers.  I’m also drinking a cold beer, and watching the race in HD.  Now playing:  Y&T’s “Summertime Girls.”  Talk about pretty much routine one week and fairly decadent the next.

Talk about marveling at how truly fragile it all is.

I hope you’re having a good weekend.

I visited BamaDan’s house today, where I tried hard to be supportive but was mostly useless.  (Tough to be anything else at a time like this, on both counts.)  This is the view from his sunroom, looking more or less west. 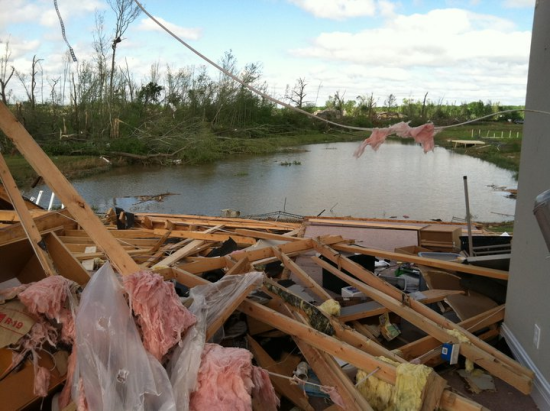 We believe the indiscriminate blob in the only remaining tall tree is the carcass of his pedal boat.

The photo, as dramatic as it is, doesn’t begin to capture the devastation.  You have to see it to believe it, and then part of you still doesn’t believe it.  The only time I ever had a similar feeling was walking through my mother and sister’s house after it burned, almost 18 years ago.  The jarring detail here is that his house went from perfect to destroyed in all of five seconds.

Make that, his whole neighborhood went from perfect to destroyed in all of five seconds.

(Updated:  here is a wide look at part of his subdivision.) 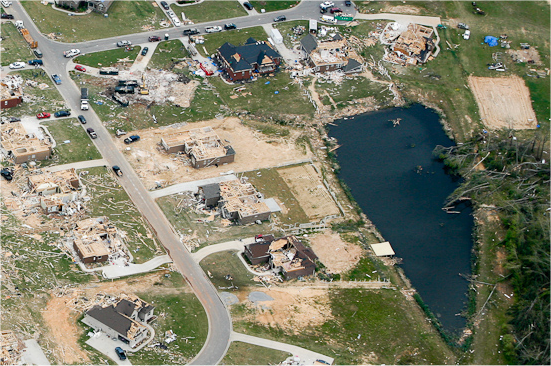 It’s heinously insensitive to walk around taking photographs when literally everyone you see is trying to come out of shock long enough to recover whatever bits of their lives they can, so I didn’t.  But I counted exactly two houses out of perhaps 80 that would qualify as even partially intact.  The rest have been violently spun to pieces.

Most depressingly, it’s so heartbreakingly widespread.  I am merely inconvenienced in the aftermath of this disaster.  Thousands are genuinely hurting, and will for some time.  Please, please remember to keep Alabama in your prayers.  Thank you.

My part of the world was severely pounded by thunderstorms and tornadoes today.  In my 40 years of living in Tornado Alley, I cannot recall a more relentless and harried day of weather.

Dozens have died.  I fear dozens more will be discovered.  A good friend of mine has lost his house.  Thankfully, he and his family are all safe.

Friends and family of mine:  everyone is fine at my house.  If you need me, please get me online.  All of the telephone networks are saturated, and I don’t wish to contribute to the problem.

All, please, spend part of the rest of your week with Alabama in your thoughts and prayers.  We need them.  Also, if you are so inclined, you can help here.  Thank you in advance.

I occasionally go around a bit on Facebook with an acquaintance who believes he is politically moderate.  (He’s actually liberal.)

Perhaps an occasional “moderate” knows he is liberal, but identifies as moderate in a conscious attempt to move the center.  However, I think it’s far more common that a “moderate” really does believe his/her views are centrist.  Don’t you love that smugness that often accompanies the claim too?  “My centrist positions have required a tremendous amount of considered thought and rigorous analysis,” the attitude seems to be.  “I am above the petty labels of the simple-minded.”

Mostly, I think claims of occupying the political center are silly.  To be sure, you can have a qualified position on an issue that makes you too conservative for a liberal ideologue on that issue, and vice versa.  But it’s silly to “average” these and decide you sit in the middle.  Given an issue, there just isn’t much truly defensible ground there.  It’s called a stand for a reason.

So today my liberal acquaintance was on about how, gee willakers, we’re just going to have to raise taxes on the wealthy again.  I went over what we’ve been over here many times:  right now the top 1% of taxpayers pay more than a third, the top 5% pay more than half, and the top 50% pay more than 96% of all federal income taxes.  Then I had an idea.

Bo:  “In your world, when is it reasonable for the entire earner base to pay something into the federal income tax system?”

LA:  “First answer my question. If the wealth isn’t supposed to “trickle down”, how is supply side economics supposed to create jobs and grow the economy? That is how it is sold by those who endorse it.”

Bo:  “I’ll be happy to get into what you believe ‘trickle-down’ economics means, but first I’d like to see if we can find a common framework from which to discuss. I’m using your words entirely in that attempt, btw.  So how can we tell “when basic necessities are met”?

Bo:  “OK, so you’re saying that when everyone is above the poverty level, then it’s reasonable to expect everyone to pay federal income tax. Is that correct?”

LA:  “Yes, a progressive tax rate based on net income levels after all deductions are taken and not a “flat tax”. Now, isn’t the premise behind supply side economics for the tax breaks to be investested back into the company, creating good paying jobs, thus creating a larger tax base?”

All right.  So I concluded from the above exchange that it would be reasonable, in LA’s view, for everyone to pay federal income tax as soon as everyone was above the poverty level.  (Never mind the plausibility of such; just follow that that’s what he said.  Got me?)  Then:

Bo:  “OK. So I may safely assume that you believe the condition you describe–the absence of poverty, if I’m understanding you correctly–is attainable. I may further safely assume that you believe this condition may eventually be brought about by taxing only the top half of wage earners at all, and a small percentage at the top of that half much more severely.  Is that correct?”

He didn’t care for that.  Too much of a jump.  I apologized for phrasing it absolutely:

Bo:  “OK, perhaps my error was in absolute phrasing on that particular point. My apologies.  You do, however, believe that some major part of eliminating poverty, which you see as attainable, lies in keeping the bottom half of wage-earners from paying any federal income tax (as it is today), and increasing taxes on high wage-earners, who already pay a large majority of federal income taxes. Correct?”

LA:  “No, I feel we should go back to the tax scale we had under Bill Clinton. I feel it was just the right balance and his tax cuts were directed at the right demographic. The economy did do pretty well under it…”

Bo:  “I’ve only used your words in putting this together. Did you not say the bottom half should continue paying no federal income taxes until poverty is eliminated?”

LA:  “No I did not. I never once talked about “eliminating poverty”. The whole premise behind the article I posted and my point is the top 1% can afford to pay 2% more of the tax burden…”

Bo:  “I asked you when it was reasonable for the entire earner base to pay something into the federal income tax system. You said when basic needs are met. I asked you how we would know when that was. You said you would “use the national poverty level and work from there.” I asked you if, when everyone was above the poverty level, if it would then be reasonable to expect everyone to pay income tax. You said yes.  What am I missing? Or are you now renouncing any of this?”

I’ll be charitable and assume that he genuinely misunderstood my first posing of the question.  But presumably I eventually communicated the question well enough.  Why couldn’t I get an answer?  I asked him to describe conditions he would find acceptable for the entire U.S. workforce to pay something in federal income tax.  He repeatedly told me this was a “loaded question,” I was being disingenuous, and so forth.

Couldn’t have possibly been that he genuinely believes that bottom 50% should never pay anything, but realized he couldn’t say that out loud.

What are the circumstances under which you’d find it acceptable for the entire U.S. workforce to pay something in federal income taxes?