I have an imminent date with a smokin’ hot blonde, so I’m recycling tonight.  This is the “25 things about me” note I posted on Facebook recently.  If it’s a rerun for you because we’re friends over there, I apologize.  If you remember when I blogged about some of these before, I apologize for that too.  If you have any other complaints, please write your representative in Congress.

1. I like brownies, and I like nuts, but I don’t like brownies with nuts.
2. I have never seen a James Bond movie or an episode of M*A*S*H from start to finish.
3. I have only one filling, and I didn’t get it until I was 28 years old.
4. I cannot roll my tongue. I can, however, turn it upside down most of the way (counter-clockwise, if you’re looking at me).
5. I’ve seen Cheap Trick 14 times, and my best friend Charles and I are visible in the audience on their DVD Silver, which is of their 25th anniversary concert in Rockford, IL.
6. I like peanut butter and mayonnaise sandwiches.
7. I was working on an internship at a paper mill in 1991 when I decided I wanted to be a technical writer.
8. I have never lost a game of Balderdash.
9. A year or so ago I subscribed to Playboy, because it was practically free, and I don’t even bother to open it most months. I think its readership is composed primarily of college kids and middle-aged men who each wish they were the other.
10. The first album I ever bought with “my own money” was Def Leppard’s High ‘n’ Dry. The first CD I ever bought was Yngwie J. Malmsteen’s Rising Force’s Odyssey.
11. I played trombone in my high school band in ninth and tenth grade. I had some of the best times of my childhood in that band.
12. I had a great great aunt who memorized the entire Bible. I occasionally think of her when I’m faced with some brute force task that seems insurmountable.
13. I have spent more than $20,000 on Diet Mountain Dew in my life.
14. Cigarette smoking gives me tremendous pleasure, and nothing stops me from doing it except for health concerns. Not expense; not smelling bad; not standing in the cold and heat; not anything else.
15. I am still in possession of every single penny that has made it to the end of the day in my pocket since February 1993. You know those blue tubs of Danish sugar cookies, a foot or so tall? It’s full. It weighs about 50 pounds.
16. I had a pet piranha for eight years.
17. I can put my entire fist in my mouth.
18. I was born on Easter, and my 11th, 22nd, and 33rd birthdays were also on Easter. I’ll have to make it to 95 to see it again. I wouldn’t bet on that.
19. I wish I liked sweet potatoes, because they’re such nutritional juggernauts. Periodically I try them, just to make sure I still don’t like them. Sadly, I never do.
20. The most useless mnemonic with which I walk around day to day is “Sally led the puppy to the court house.” Want to know what that’s for? How about the carpal bones: scaphoid, lunate, triquetral, pisiform, trapezium, trapezoid, capate, and hamate. Thank you, Mrs. Turner.
21. When I was selling cars, I once made $800 in 30 minutes. Of course, I also made $800 for the entire month of December, 1993.
22. I am highly intolerant of marital infidelity. It is also a concept around which I hold one of my only sexist beliefs, as I generally hold men more responsible for it than women.
23. In January 1996, an Alabama state trooper pulled me over for 117 in a 55. Because traffic was light, I hadn’t been drinking, and I hadn’t lied to him about not being cited for speeding recently, he wrote me for 75 in a 55.
24. That’s not even close to the fastest I’ve ever driven (147). Second-stupidest single thing I ever did.
25. I’m not publicly disclosing the first-stupidest single thing I ever did.

As I write, the House has just passed a “stimulus” bill that is advertised at $819 billion.  (It’s really closer to $1.2 trillion—that’s $1,200,000,000,000—because they’re not including loan interest in the PR number.)  Eleven Democrats cast “no” votes, but more interestingly (to me), no Republicans voted for the bill.

Perhaps this is the first step in a long march back to fiscal respectability.  (Let’s face it:  I don’t have any plausible hope of seeing a Libertarian or Constitution Party majority in Congress in my lifetime, so Republicans with spines is about as far as I fantasize.)

If you have not read The Wall Street Journal‘s analysis of this bill, you should.  Quoting (and summarizing) the article:

“This is a political wonder that manages to spend money on just about every pent-up Democratic proposal of the last 40 years.” 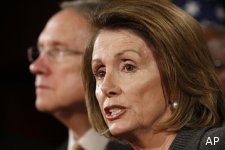 How about $50 million for that job dynamo, the National Endowment for the Arts?  How about three times that amount for the Smithsonian?  I like that we have a national museum of its caliber, but what has it to do with the economic health of the country?  How about $66 billion for the Department of Education—on top of the budget doubling under President Bush, and more than the department’s entire budget a mere decade ago?

The bottom line is that, even using the most generous definitions of the term “stimulus,” about 12% of this bill—not even an eighth of it—reasonably qualifies.

Mind, this is going to be law.  I don’t have any illusions about that.  As President Obama so diplomatically put it:  “I won.”

The only shred of encouragement I’m allowing myself is that Republicans may be rediscovering some semblance of principle in their copious wound-licking.  If they keep applying good sense consistently, and the Dems keep shooting the moon, perhaps 2010 will look like 1994.

Joe posted this on Facebook last night, and frankly, it’s the funniest thing I’ve seen online in quite some time.  This video’s creator had a wonderful idea and executed it perfectly.  Take four minutes and watch this one.  It’s worth it.