Wow, Thanksgiving was late.  Only three weeks to go at work before I’m off for Christmas.  Lea’s gotten most of the boys’ shopping done, and I’ve pointed and clicked here and there for them too.  I’ll probably finish up the rest of my shopping this week.

(Speaking of avoiding all of the damned retail traffic:  I thought to buy dog food last week, but I’m still going to have to get out for air intake filters at some point.  What time does Home Depot open?  6?)

The s-word has crept into the forecast for tonight and tomorrow.  It’s not nearly cold enough to cause any logistical problems (sorry, Melanie, though I’m sure you’ve parsed all of this already).  Nevertheless, I’m encouraged.  This is early for us, and it really has been a damned cold November, relatively speaking.  Perhaps we’ll get our overdue debilitating stay-home event this winter.

When I carry tension around with me (doesn’t happen as often as it used to, but still does sometimes), I generally do it in my neck and upper back.  I’ve allowed more than one person to deposit an excessive amount there over the past week, and I’ve decided to refuse to lift it again.  It will not be there when I stand up from the bed in the morning.  Buh bye, jetsam. 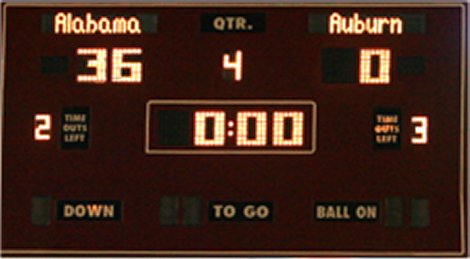 You may have heard there’s a football game in Alabama tomorrow. 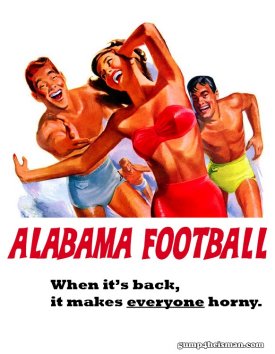 The annual gridiron meeting between the University of Alabama and Auburn University is known as the Iron Bowl, because for many years it was played exclusively with a 50-50 ticket split at Legion Field in Birmingham, a city built around large iron ore deposits.  It’s been a regular home-home game for a decade now, but the name remains.

The Iron Bowl is the fiercest rivalry in sports.  (It’s so adorable when someone claims some other rivalry is.)  The last time I watched Alabama win one, I was sitting in one of those godawful vinyl sleeper chairs in a room at Huntsville Hospital, with my not-quite-two-day-old son Nathan asleep on my chest.

Nathan had his seventh birthday two weeks ago.

We could be the 7-4 or 8-3 I thought we’d be at this point, or even well under expectations, and ending Auburn’s winning streak would be a big deal.  Instead, we’re 11-0, #1, and in full control of our own destiny for the national title.  So it’s a huge deal.

Alabama’s done a good job of playing one game at a time, and here’s hoping that continues tomorrow.  Of course I don’t want to lose to Florida, nor do I want to lose our bowl game, particularly if it’s the BCS title game.  But the Auburn streak must end, and if we’re 12-0 this time tomorrow night, I’ll pronounce it a great year no matter what else happens.

We’re not supposed to be here yet, and we are.  And that rocks.

All the best to you and your family.  Love.  Appreciate.

I’m also thankful that, here in the heart of hopelessly backward-ass flyover country, my kids aren’t subjected to insufferable malcontents who wish to inflict that Thanksgiving celebrations shamelessly glorify genocide, nor are they exposed to tortured, hand-wringing blather about restraint and sustainability, when the whole point of the holiday is its unsustainability.