We were right out of the comics at our house this year, though one boy was Marvel and the other DC: 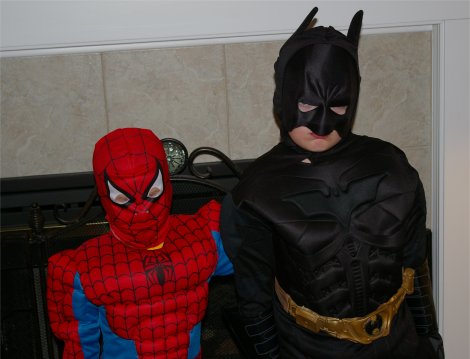 Next year I may start trying to steer Nathan toward something a little more creative.  These are cool costumes—Mommy knows where to find the good stuff, and they have substantial play value after Halloween is over—but they are exactly what Father Television tells us to want.  The best costume I ever had was a robot that Dad and I made essentially from scratch, with blinking lights and everything.  I might like us to head a bit more toward expressing ourselves in that way for 2009.

Our trick-or-treat traffic was way down this year, as in it might be off as much as 75%.  I don’t know if that’s because it’s a Friday night or what, but it’s an ominous sign.  Still, it’s just one data point.  We’ll see if the trend continues next year.

Really, I’m delighted that our children got to trick-or-treat at all.  I was sure the tradition would be dead by now, superseded by trunk-or-treat and walk-around-the-mall and so forth.  Even so, from talking to coworkers, though it lives, it’s highly location-specific.  This is our ninth Halloween in this neighborhood, and this is the first year that hasn’t been gangbusters (-5), which concerns me.  Like I said, check with me in ’09.

This balance ball set belonged to my grandfather.  I remember playing with it a lot sitting at his dining room table in Panama City. 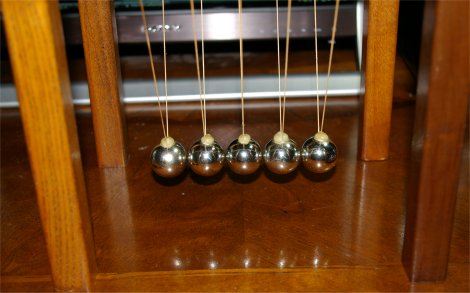 I got it when my grandmother died in 2003.  Now it lives in my study, and Aaron likes it.  One morning last week he asked if he could play with it, and I absently agreed, and by the time it occurred to me that he should be receiving close supervision, he had tangled all five balls into a huge mess and merrily sauntered off to something else.  My fault all the way.

You just really wouldn’t believe how knotted and twisted this thing can get.  The spatial perception required to trace the strings, figure out what’s knotted and what’s merely twisted, etc., is substantial.  I wrestled with it for about five minutes that morning and left it for another time.

Another time wound up being tonight.  I’ve have snapped a “before” shot, but as badly as it was tangled, I really thought there was about a 75% chance I’d end up ripping all of the fucking balls off, throwing them at (maybe through; they’re heavy) the goddam wall, and smashing the frame into splinters with my bare hands.

(Ten years ago, the chance of that happening would have been about 97%.)

See, this thing is at least 30 years old.  The strings are brittle enough to leave a slight smell on your fingers, okay?  To say that they are not particularly tolerant of a bunch of jerking and tugging around is an understatement.

Start to finish tonight:  35 minutes.  My grandfather’s balance balls have lived to see another day, their sparse elegance on my shelf a shining testimony to the inherent power of patience and restraint.

Dear readers, trust me:  this is one damned impressive photograph.

All right, dudes and dolls!  So far, in my discursive travels in these final weeks leading up to the election, I’ve been called a fascist and a racist (check comments at these links, not post bodies).

So nobody’s exactly said Nazi yet.  (Just throwing that out there if you’re looking to call me a name, and you value novelty.)

Of course I’m neither a fascist nor a racist, but that doesn’t matter!  This is the process, and ad hominem is just part of it!

Actually it matters a great deal, and no, it’s not just part of it.  In fact, to my thinking, most of the time it gets you excused from the grown-up table.

Folks, look.  I’ll get in there and go toe-to-toe with you.  Most of the time I can articulate reasonably well why I think something, and I’m delighted to tell you about it.  Furthermore, I’m delighted to hear why you think something.  I assume you are an intelligent and reasonable person, and that you have arrived at a position thoughtfully.  I want to hear it.  Disagreement has shaped many of my views.

And I never have to look far for disagreement.  I’ve encountered damned few people as far left as I am socially and as far right as I am fiscally.  Sure as shit, I think something that pisses you off.  Check here.

But we’ve got to have that basic mutual respect, and name-calling destroys it more quickly than just about anything else.  The arena for a mature and stimulating exchange of ideas is a mutual construct.

I’m not altogether innocent.  I think that, however, should you be bored enough to research such, you’ll find that on those rare occasions I’ve called someone a name, it’s almost always return fire.  I much prefer to keep our engagement intellectual and ideological, but if you’re going to make it irrational and personal, then I haven’t been above throwing it back at you.

(I’m offering that much more as disclosure than attempted justification.  There’s a rocking ton to be said for being big enough to walk away too, and there have been times that I haven’t been big enough.)

Concerned with the polling gap entering the final week of the campaign, this morning Sarah Palin, with a chilling screech, ripped herself free from her ovipositor.

Newly unencumbered, she can better utilize her speed, as well as her full complement of terrifying biological weapons.

The Palin creature explained to a reporter:  “These folks just need some more winkin’ and lovin’ to see it our way, and if that’s not enough, then we’ll…well, hold still, honey, and I’ll show ya.”  She then melted his face with a torrent of acid from the auxiliary jaws formed from her highly modified tongue.

John McCain was absent from this morning’s events.  The campaign is downplaying widespread reports that he has been incapacitated for later cocooning at the Palin creature’s leisure.

The Palin creature is a perfect organism, unclouded by conscience, remorse, or delusions of morality.