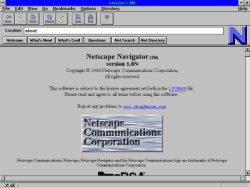 I didn’t see the birth of the World Wide Web, but given the amount of change it’s undergone since my first exposure, I might as well have. I was on the Web when there were merely tens of thousands of pages (instead of billions today), and almost all of it was black Times New Roman on a gray background. It was way uglier, way slower, and way smaller than what we have today.

Sometimes I think back to those early days in my first “real” job at Intergraph, in early 1994, and try to remember whether I had any notion of the eventual cultural significance of this little network that occupied some of my time. I don’t think I did. Most of what I enjoyed online predated the Web–email and Usenet, mainly, with an occasional telnet voyage–and the Web was an occasional sideline. I didn’t have a clue that nearly everyone would eventually say “the Internet” when they meant the World Wide Web.

Do you remember the world before that was true? I mean, I know most of you have specific memories of things you did before then, but do you remember what it felt like? I don’t. I received my degree in 1992, so I was one of the last college graduates to study without it. What a difference a mature Web would have made! On a lighter note, I remember riding with my mother to Panama City and for most of the trip, we tried to think of the name of the actor who played Agent 86 on Get Smart. I sat up in bed with the thought of Don Adams at 3 in the morning, and actually woke my mother up to tell her. Today it’s a quick trip to IMDB, and you’re done.

Huge swaths of wonder have died with the coming of age of the Web. For nearly any question, you don’t walk around chewing on what the answer might be for any length of time: you Google it, and it’s over. My children will never know a world in which that isn’t true. I think that’s one of the most incredible societal advances of my lifetime. I suspect it’s my generation’s “I walked to school uphill both ways” story to tell our children, actually.

(Yes, I know Little Miss Sunshine was in theaters eight months ago and came out on DVD four months ago, but I don’t watch movies like normal people. If you want timely reviews, I’m not your guy.)

I had preconceptions about this story of a dysfunctional family trying to get their little girl to a beauty pageant. For one thing, I had a strong recommendation in hand from a good friend who is a master student of English and American literature. She carries a lot of that perspective into her movie watching, so her recommendations usually break cerebral to some degree. Also, curiously, I had received a warning from another friend that it might not be a good film for me to watch with Lea.

Add all of this up, and I expected comedic elements to be constituents of a visceral drama of some sort.

But it’s not a drama. Up one side it’s screwball and sweet; down the other, it manages simultaneous subtlety and ruthlessness in its satire. Both sides work. As much as I hate the term, I’d call it a “feel-good” movie for the moderately to severely cynical.

It’s also an ideal example of a film being more than the sum of its parts. You’ve seen all of the characters and scenarios before, but the charm of the film is that it has its own rhythm that isn’t quite like anything else I can remember. There were several scenes in which it zagged when I expected it to zig, whether in the dialogue, set design, or whatever. Often I resent this as trite and mainpulative, but it’s deft enough in Little Miss Sunshine to be refreshing instead.

It’s cast and acted perfectly. Particular standouts for me were Greg Kinnear as the well-meaning but misguided loser father; Alan Arkin in an Oscar-winning role as his father; and Abigail Breslin as Olive, who never quite walked off with the whole thing, but threatened to every time she was on screen. I also enjoyed seeing Gadsden, Alabama’s own Beth Grant, in a delightfully detestable role as a beauty pageant director that reminded me quite a bit of her portrayal of Kitty “Sometimes I doubt your commitment to Sparkle Motion!” Farmer in Donnie Darko.

Speaking of the Little Miss Sunshine pageant itself: wow. I doubt these sorts of pageants can be satirized in any conventional sense. To demonstrate how ridiculous it is, you just show it as it is: little girls who may still be wetting the bed hair-sprayed, eyelinered, lipsticked, taffetaed, fishnet-stockinged, and spray-tanned into avatars of high sluttiness, courtesy their demented parents and handlers. It’s all a perfect backdrop for the film’s climax.

I found Little Miss Sunshine without significant flaws and enjoyed it thoroughly. It’s rated R for language, drug use, and sexuality, so don’t watch it with your kindergartener or your jittery mother-in-law.

Thanks for the guesses, all. I got one correct answer for the second photo and that’s all, so these were pretty tough, I guess. Answers here.

Mostly, child stars still look like themselves when they grow up. Ricky Schroder can call himself Rick Schroder and be a badass on NYPD Blue or whatever, but he still looks very much like the rich kid son of the eternally almost famous Joel Higgins on Silver Spoons, or perhaps the little boy in The Champ.

Sometimes, the grown-up doesn’t look like the kid at all. Here are five adult photos of child stars that I found particularly interesting. Do you know who they are? Your only hint is that each received major exposure in a television show and/or film during the second half of the 20th century. I’ve ordered them based on my assessment of difficulty (easiest is first). Good luck. Answers Friday evening.

Remember how cool Stratego pieces used to be? The silver-on-blue and gold-on-red tiles were pretty nifty, weren’t they? 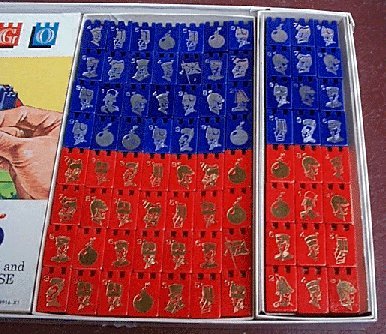 Well, now you have to peel stickers and put them on all 80 pieces: 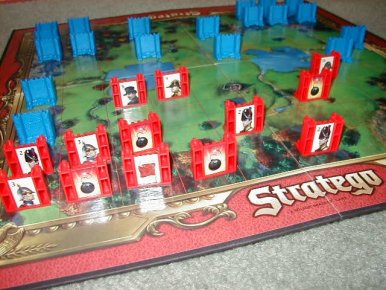 I still have my set from when I was little, with all of the silver-on-blue and gold-on-red pieces as God intended, in the cheesy 1975 box that looks like this: 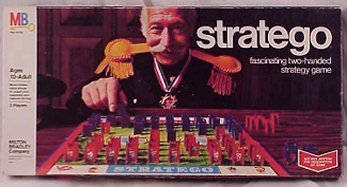 I think we’ll just hang with this one. Can the stickers, MB/Hasbro–that’s lame.

Thanks to Ed’s Stratego Site for the images.