We are members of the Huntsville Museum of Art, though I visit far too infrequently.

Oh, what a marvelous trip!  The exhibit is In Company with Angels:  Seven Rediscovered Tiffany Windows. 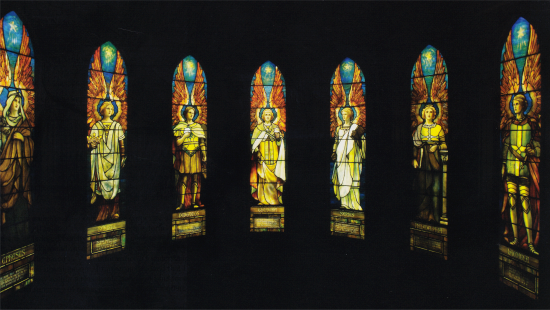 The Cincinnati church of which these windows were part was demolished in 1964, and though some of the parishioners had the foresight to save the windows, they’ve been kind of sitting around here and there in barns and sheds and such until their rediscovery 10 years ago and subsequent restoration.  The angels are based on seven letters written to the seven Christian churches of Asia Minor identified in the Book of Revelation: Ephesus, Smyrna, Pergamos, Thyatira, Sardis, Philadelphia, and Laodicea.

I won’t go into too much detail here, partially because I want to leave discoveries for folks who go, but mostly because nothing I could say approaches the experience of seeing them.

Speaking of:  locals, you have two weeks left.  These windows are magnificent and absolutely worth the trip to the museum.

Well, the UPS man brought me Hostel: Part III today—release day—and what better time for a feel-good family flick than the interim between Christmas and New Year’s, eh?

This is the first one not directed by Eli Roth (or “presented by Quentin Tarantino”), and the fact that this was a direct-to-video release effectively lowered my expectations.

Dig:  it’s not awful, but it’s a definite step down from the first and second installments.  There is a lot less budget here.  There is insufficient novelty value in moving the setting to Las Vegas.  There’s a well-done scene in which rich, well-dressed people drink expensive liquor and use their computers to do despicable things, but you know what?  It was better in Taken.

Basically, the first film was a well-produced, mostly well-acted introduction to the unthinkably horrific concept of a murder retreat.  The second film took the same setting, but added a marvelously understated sense of black humor and a wickedly powerful heroine.  (I’m a big fan of Hostel:  Part II.)

What sticks out is that this installment just doesn’t bring anything compelling of its own to the party.  I mean, it’s a gimmick franchise, you know?  It has one trick.  And given that it has one trick, there has to be payoff beyond plot; bonuses that stand on their own.  They just aren’t here.

(And if gorno is your thing:  this is nowhere near the first two.)

The biggest potential liability is one of audience assumption.  It’s inevitable that some people are going to happen into this film first and draw conclusions about the franchise at large, and that’s a mistake.  This is a skillful knockoff, not a legitimate spiritual successor to the first two chapters.

If you’re a Hostel completist—as disturbing as such a concept is—then see it.  Like I said, it’s not a disaster.  It’s just a shame that that the first two films stood so much taller.

For to us a child is born; to us a son is given.  And the government shall be on his shoulders.  And he will be called Wonderful Counselor, Mighty God, Everlasting Father, Prince of Peace. – Isaiah 9:6

Merry Christmas to you and your family.